REBLOGGED FROM A MEDIEVAL POTPOURRI @sparkypus.com 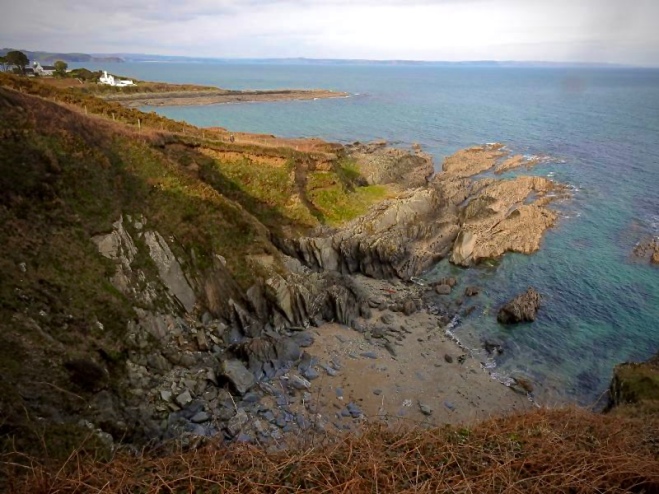 Bodrugan Leap – a traditional Cornish story tells of how Sir Henry Bodrugan leaped from this cliff top to a waiting boat and made his escape first to France and later to Ireland.

If you are reading this then it is also likely that you have read my other various posts relating to the Coldridge theory including :  A Portrait of Edward V and Even a Resting Place?

A PORTRAIT OF EDWARD V AND THE MYSTERY OF COLDRIDGE CHURCH

THE MYSTERIOUS DUBLIN KING AND THE BATTLE OF STOKE

WAS LAMBERT SIMNEL A TUDOR HOAX?

If reading any of these posts you have ever wondered who was it who could have taken the young Edward V alias John Evans over the sea to Dublin may I suggest – drum roll – step forward Sir Henry Bodrugan.   Sir Henry, also known as Henry Trenowith,  was one of those larger than life characters who litter history and who had done exceedingly well during both the reigns of  Edward IV and Richard III.  He was a knight of the body of Richard and according to old Cornish tradition he may have been present at Bosworth for Richard before making his escape after the battle to Cornwall (1).    Knighted by Edward on the creation of Prince Edward as Prince of Wales.  he was one of the most powerful men in Cornwall during those interesting times (2).

Moving on to 1484 It has already been noted in some of the articles mentioned above that on the 3rd March two days following Elizabeth Woodville emerging from sanctuary,  Richard III sent one of his loyal followers, Sir Robert Markynfield from Yorkshire to Coldridge, an isolated village in Devon, granting him the position of Parker there  – Robert Markyngfeld/the keping of the park of Holrig in Devonshire during the kinges pleasure… (3).  This was a rather puzzling move by Richard which became even more intriguing  when in April Coldridge was among the slew of properties that Richard granted Sir Henry the lordship of including the manors of Trelawne and Tywardreath (4) Thus we have Coldridge, an isolated  backwater, becoming quite a hotbed of activity.  If the Coldridge theory is correct and we are barking up the correct tree this activity was due to Edward V being sent to live there incognito by Richard III in 1484 to what had once been the property of  Thomas Grey,  Marquis of Dorset, Edward’s half brother.   Further to this is speculation  that Edward V, who had been living under the alias of John Evans,  was the King Edward who was later crowned in Christ Church Cathedral, Dublin on the 24 May 1487.  But if the Coldridge theory is correct who would have accompanied the young Edward to Dublin?  Certainly not fellow Yorkist rebels, Lincoln and Lovell for they arrived in Dublin after the arrival of the young lad who was about to be crowned and his supporters.    And here is yet another vitally important  link – for we know that none other than Sir Henry,  owner of Coldridge,  and his son John ‘Beaumont’,  were both present at the coronation in Dublin (5). I think we need look no further for the chaperone of Edward.  It is not known whether Sir Henry also accompanied the newly crowned Edward back to England and then on to Stoke but his name being left off the list of those who fought for the Yorkist cause that day we must assume he did not.  However both Henry and John Beaumont would be included in the Act of Attainder against the Yorkist rebels in November 1487.     We must backtrack a little to the 8 February 1487 when  Sir Richard Edgecombe, who had his own axe to grind, had been sent to arrest Sir Henry and John Beaumont on the grounds that they had ‘withdrawn themselves into private places in the counties of Devon and Cornwall and stir up sedition’ (6).    It should be noted that this coincided with the time the news of the ‘Lambert Simnel’ plot reached the ears of Henry VII, the ‘retirement’ of Elizabeth Woodville to Bermondsey Abbey and the arrests of  Thomas Grey,  Marquis of Dorset  and Bishop Stillington.    But our medieval version of Errol Flynn made his escape, and if a traditional  story is to be believed, in a most spectacular way, leaping off a cliff and landing in the sea below where a boat awaited him.    We will pause here to repeat the story which is too good to miss:

“… Bodrugan slipped away out of his house to the cliffs nearby, where there was a boat waiting for him.   As soon therefore as he came to the cliff above an hundred feet high, he lept down into the sea upon a little grassy island there without much hurt or damage, where instantly a boat which he had prepared in the cove attended him there, which transported  him to a ship that carried him into France.  Which astonishing fact and place is to this day well known and remembered by the name of Harry Bodrugan’s leap’ (7).