The beautiful Cathedral of Wells  is a medieval visual delight. It was, of course, the See of Bishop Robert Stillington who sought out Richard Duke of Gloucester and announced that King Edward IV had been secretly married to Eleanor Talbot, daughter of the Earl of Shrewsbury, prior to wedding  Elizabeth Woodville in a second secret ceremony, thus making his second marriage bigamous and invalid. He knew the matter was true, he said, because he was the one who had officiated at the marriage of Edward and Eleanor..

Stillington was Archdeacon of Taunton when Edward might have met and married Eleanor Talbot, probably around 1461. He was, of course, not then a Bishop but the Canon Stillington. He also served in Edward’s government as Keeper of the Privy seal. He was elected to his Bishopric in 1465–at King Edward’s insistence, as the the Pope initially proposed a different candidate. He was also intermittently Lord Chancellor, though he appears to have been dismissed in 1473. A few years later, Stillington was briefly imprisoned for unspecified offences which seem to have been connected with George of Clarence’s treason charges.

After Richard III’s death at Bosworth, Henry VII immediately ordered Stillington imprisoned . Upon his release, rather than retiring somewhere far from court or bowing to the new Tudor regime, he immediately involved himself in the Lambert Simnel uprising. Once Stoke Field was fought and Tudor victorious , Stillington fled to Oxford, where for a while the University protected him. However, eventually he was captured and thrown in prison in Windsor Castle–this time for the rest of his days. He died in 1491 and was taken to Somerset for burial at Wells Cathedral.

During his lifetime, Stillington did not spend much time in Wells but he did complete building work within the cathedral and raised his own mortuary chapel there in the 1470’s, complete with huge gilded bosses bosses of suns and roses. This chapel, dedicated to the Virgin, was built on one side of the cloisters near the holy springs that give Wells its name and on  the foundations of an earlier Saxon church. During the Reformation, in the reign of Edward VI, Sir John Gates destroyed the chapel and tomb and, according to old accounts,ripped the Bishop’s remains out of his lead coffin.

Rather interestingly, Stillington’s Chapel is the ONLY part of Wells Cathedral that was severely damaged during the Reformation, the Bishop’s tomb not only being desecrated but the building itself razed to the ground – and some would have it that there’s no such thing as Tudor propaganda? Of course, the roof was later pillaged by Monmouth’s rebels to make ammunition for use at Sedgemoor.

The foundations of Stillington’s chapel have been excavated, and if you visit Wells Cathedral today, you can see scant stonework sticking out of the ground in Camery Gardens. Nearby, in the cloisters, several massive chunks of his tomb canopy are on display, decorated with symbols of the House of York. 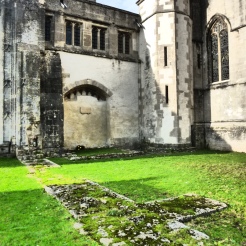 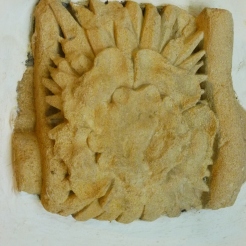