If anyone today wandering around Bermondsey, South London, should find themselves in redeveloped Bermondsey Square they may be surprised to find that they are standing on the spot where once stood the quadrangle of the Abbey of Bermondsey, the entrance  to the square being the site of the Abbey gatehouse.

Nothing much hardly remains today above ground (after the archaeologists had completed their study of the Abbey remains in 2006 they were once again covered over)  other than some remains of the south western tower which can be seen below the glass floor of a restaurant and nearby houses on Grange Walk, 5, 6 and 7 which incorporate in their structure remains of one wall of the Abbey’s stone eastern gatehouse, particularly No.7,  where the chamfered south jamb with two wrought iron gate hooks still project. 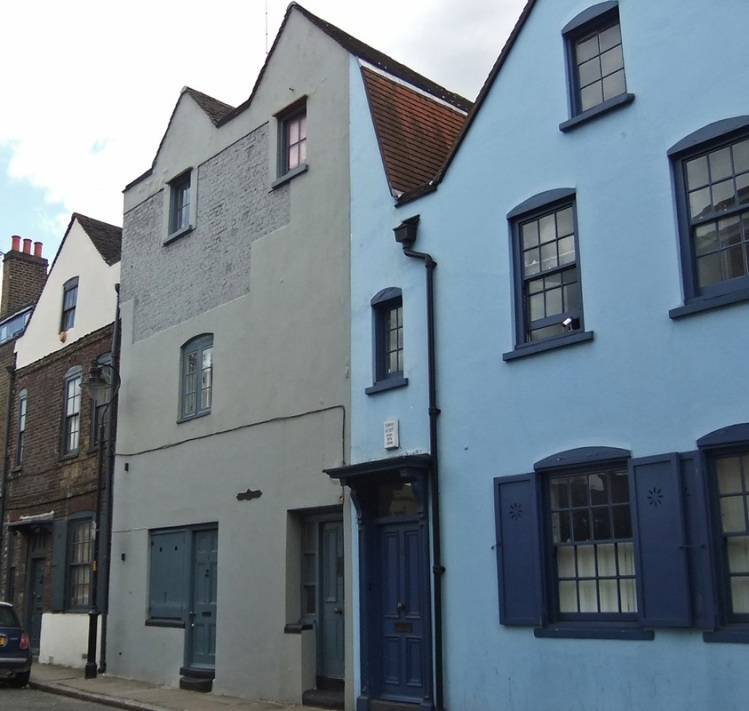 5, 6 and 7 Grange Walk, Bermondsey incorporating the remains of the Abbey gatehouse seen in 18th century engraving below.  Note the roof line still recognisable today and windows still in original positions. 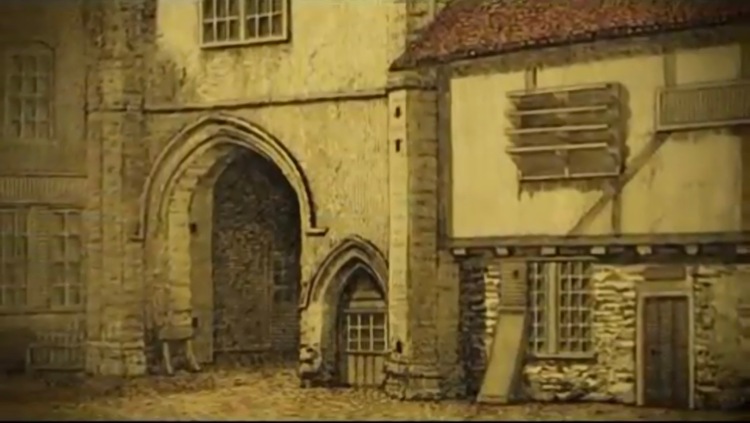 Drawing by C R B Barrett 1906 where the two Gatehouse hinges can clearly be seen with the remains of a third one still visible.

It is intriguing to remember that in this Abbey,  Edward lV’s queen lived out the last five years of her life, in the Clare guest suite, dying there on 8 June 1492,  She was the second queen to both retire and die there, the first being Katherine of Valois, Henry V’s widow.  Elizabeth commenced her retirement there in 1487 and debate still rages as to whether she retired there willingly or unwillingly with some good reason to be believe that her withdrawal there was forced upon her by her son-in-law, Henry Vll.  Certainly her removal there and the arrest of her son Thomas Grey followed hot on the heels of the news of the outbreak of the Lambert Simnel  rebellion and a council meeting at Sheen so that it might be reasonable to deduce that  Elizabeth and Thomas were implicated in that plot.  MacGibbon, Elizabeth’s biographer wrote ‘Henry is reported to have deprived Elizabeth of all her lands and estates, conferring them on her daughter, his queen, on the l May 1487, and finally to have induced her to spend the rest of her days in seclusion in Bermondsey Abbey in very reduced circumstances ‘(1).  Vergil, the Tudor historian was later to say that this was because Elizabeth had reached an understanding with King Richard three years earlier  upon which she removed herself and her daughters from sanctuary.  This is absurd and it may be that Vergil knew full well that Elizabeth’s retirement was not voluntary but did not know the precise circumstances or  chose not to repeat them it being unwise to record that Elizabeth and Grey may have got themselves involved in the Simnel rebellion because they both believed that Edward of Westminster and/or Richard of Shrewsbury were alive and well. Certainly it does seem a strange decision on Elizabeth’s part if she herself decided on the move to Bermondsey as she had only in the previous year taken out a 40 year lease on the Abbots House, known as Cheyneygates, at Westminster Abbey, conveniently  close to the Palace of Westminster ( 2 ).  Ah, man makes plans and the Gods laugh as they say.  MacGibbon also opines, rather contradictorily, as he seems rather besotted with Elizabeth, that ‘It is possible, if not probable, that Henry disliked his mother-in-law and in this he was no means singular, for there never was a woman who contrived to make more personal enemies’ but he adds as an afterthought, ‘but he ever deprived her of either property or dignity, remains to be proved’.  Furthermore, ‘far from being exiled from her daugher’s court, she was in that same year chosen as Prince Arthur’s godmother and attended at the font’ ( 3).  Finally, he plucks his ripest plumb from the tree, that on the 28 November 1487 Henry and James lll of Scotland agreed that the latter should marry Elizabeth as well as two of her daughters marry James’ sons.  However it must be remembered that at the time of James death, June 1488 none of these marriages had actually taken place and so it cannot be taken as a given that either King, particulary Henry fully intended these marriages to take place.  Indeed David Baldwin points out that ‘the proposed marriages had been mooted before the Simnel rebellion,  at least as early as the Three Years Truce signed on the 3 July 1486’ ( 4 ).

It has been said that it is unlikely that Elizabeth would involve herself in the Simnel plot, which would have culminated not only in the eviction of Henry, her son-in-law.  from the throne but also her daughter not to mention have robbed  her small grandson Arthur of his future   inheritance.  But on the other hand if she believed that the true intention of the plot was not to put Simnel/ young Warwick on the throne but one of her surviving sons, then it is highly likely that this is the very course she would have taken.  This may also explain any coolness that Elizabeth of York may have felt towards her mother and, if this were the case,   Elizabeth’s retirement,  brought about by  her diminished  financial circumstances,  leaving her with little choice, may have proved very  convenient for the royal couple, .  Certainly from Henry’s point of view Bermondsey must have seemed the perfect solution.  The accommodation itself, the Clare Suite, may have been deemed suitable by some  for an ex-queen although to Elizabeth, who had lived a life of luxury in many sumptuous properties  it must have seemed a massive case of downsizing, as we call it today, with a close watch on her movements and an occasional outing to keep any murmuring/speculation down. 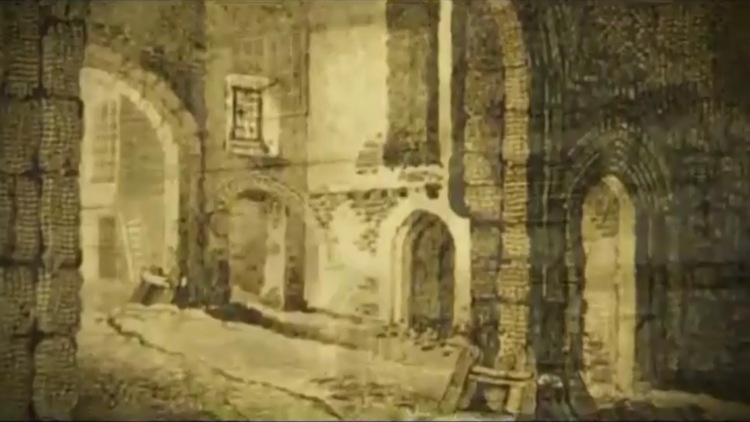 Interior of Great Gatehouse as it was in the 17th century.

18th century print of one of the Abbey rooms before demolition

A)  1485.  Elizabeth is treated with deference by Henry, her title of Queen Dowager being restored to her in Henry’s first parliament which met a week after his coronation on 7 November 1485.  Acted as godmother to her grandson Arthur.

B) 1486.  Titulus Regius declaring the invalidity of Elizabeth’s marriage to King Edward was repealed in Henry’s first parliament  and on the 5 March 1486 she received annuities and a life interest in a raft of properties in southern England in full satisfaction of her dower (5)

D) 1487.  February.  Shortly after news of the Lambert Simnel plot reached England Elizabeth retired to Bermondsey Abbey and her son Thomas Grey is arrested and put into the Tower of London.  Elizabeth’s biographer David Baldwin wrote Henry ‘deprived Elizabeth of all her properties, and confined her to Bermondsey on the unlikely grounds that she had imperilled his cause by surrendering her daughters, including his bride, to King Richard three years earlier’.

E)  1487 November 28th.  An agreement between Henry and James lll of Scotland for the latter to marry Elizabeth.  However, James died in June 1488 without this proposed marriage taking place.

F)  1489 November.  Elizabeth is present when Francois, Monsieur de Luxemboug, head of a visiting French embassy, met Elizabeth of York and her mother-in-law, Margaret Beaufort.  Although this might appear prima facie to indicate that all was well within the royal family, as it was surely intended to do,  the possibility exists that Francois, her kinsman,  had insisted on meeting Elizabeth and to avoid suspicion and gossip the meeting was duly arranged with the presence of Margaret stiffling any chance of a private conversation taking place which might have occurred had he met her in private at Bermondsey.

G)  1492 April 10th.  Elizabeth makes her will in Bermondsey Abbey.  There is no dispute, with her will still in existence, that her  condition was, for a dowager queen, extremely impoverished.  I do not have to go into the entire content of the will which is well know other than to repeat the words ‘I’tm where I have no worldly goods to do the queens grace, my dearest daughter, a pleasure with, neither to reward any of my children, according to my heart and mind, as is to me possible….’

It could be said that Elizabeth was the human rock that the House of York foundered, and finally, crashed upon, taking with it her two young sons, although this in no way pardons Edward with whom the buck must stop.  Perhaps he was giddy with his triumphs but certainly raging testosterone overcome common sense.  Edward seems to have kept his brains in his pants and the ensuing problems and tragedy that this later caused is well documented elsewhere and I need not go into it here.  Perhaps it would be hard hearted not to feel some glimmer of compassion when reading the pitiful will made at Bermondsey.  Elizabeth asked for a humble funeral and that is exactly what she got – even the herald reporting it was shocked – and so she was laid to rest in a wooden coffin without the usual inner lead one so that when the vault  in which she and Edward were interred was opened in 1789 all that remained of Elizabeth was a pile of bones and the remains of the coffin which had rotted away.  When the vault was resealed once again there appears to have been nothing left of Elizabeth, her bones having been stolen by Georgian souvenir collectors.  So Elizabeth remains a footnote in history, taking any secrets she may have had to the grave with her, including perhaps the whereabouts/fates of her two young sons.  She died knowing that her daughter was queen and that her blood would run through the future Tudor monarchs and perhaps she gained some comfort from that..but I wonder, did she ever muse on what might have been and what had been lost.  I leave you dear reader to make your own mind up about that.

4.  David Baldwin Elizabeth Woodville Mother of the Princes in the Tower p115