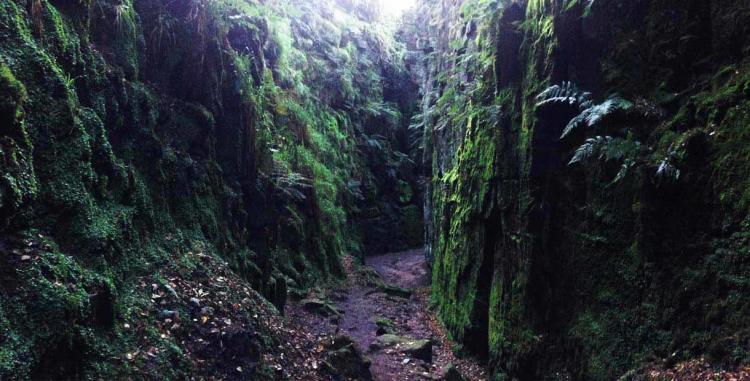 Most people, even if they haven’t read/tried to read, the ancient British poem Sir Gawain and the Green Knight, will at least know the opening scene. It’s Christmas at Camelot, and King Arthur and his knights are enjoying themselves, feasting and celebrating, when into the hall rides a huge knight who carries a sprig of holly. He is normal enough in every aspect, except for his gigantic size and the fact that he and his horse are emerald-green from head to toe/hoof. He challenges anyone to decapitate him, and Gawain steps up to the challenge. Swinging his sword, he lops the giant’s head, which rolls across the floor. The knights, being rather sozzled, kick it around…until, to their horror, the Green Knight’s body rises and comes across the pick up its head, which it puts back in place on its neck. Then he utters a solemn challenge to Gawain that twelve months hence, he, Gawain, is to find the Green Knight, who will return the decapitating favour. Chivalry demands that Gawain accepts the challenge, and the gist of the long poem that follows covers his journey to find the Green Knight’s lair.

This 600+-years-old alliterative work, written around 1400, is one of the jewels in the crown of British poetry. Originally it had no title, but over the centuries acquired the one we all know now. Alliteration is one of the hallmarks of English poetry, and Simon Armitage, who has written his own updated version of the poem, not only recognises the importance of this “tool”, but incorporates it into his work. Thus his chosen words are in the narrative of the amazing BBC4 documentary which goes by the same title as the poem itself. I have just watched it on BBC iPlayer, and do not know if it is available elsewhere, but if you can watch it, I hope you do.

The film is beautifully filmed during a very soggy English winter, and endeavours to follow the route of Gawain’s quest for the Green Knight. It is full of nature and the scenery, introducing ancient British legends and creatures long gone from our shores. We are reminded, visually, of how very lovely and unique the land is in which modern man still lives. Gawain is a devout Christian in a world filled with the supernatural. He encounters wild men called wodwose, trolls, giants, bears…and the occasional boar. And a very sexy lady who leads him from the straight and narrow into a curtained bed, where she has her evil way with him.

There are some fine set pieces in the film, especially a sequence filmed at Haddon Hall in Derbyshire. A wonderful array of authentic medieval food is laid out on a white-clothed trestle table in the hall, with greenery adorning windows, tables and furniture. A large fire flickers and crackles in the hearth, and it is so atmospheric that it captures and holds the attention , lingering long after Gawain has moved on.

The story reaches its climax (it is thought) at Lud’s Church in Staffordshire (see illustration above). The soggy English winter is relentless, and just before this there are scenes higher on the Peaks, where clouds clings to the summit, and figures and scenery are misty shapes.

Be warned that the film is a bit gory when it comes to killing, gutting and skinning a pig, but that was the only part where I had to look away. There is an excellent soundtrack of eerie, otherworldly songs and music. The whole adds up to a staggeringly beautiful documentary, showing how close to paganism medieval Christians actually were. I thoroughly recommend it, especially if you need to be reminded that Britain is unique and can offer far, far more than most of the world. Well, in my opinion. I adore my homeland in all its seasons, and am proud to be part of it.

I mentioned earlier that poet Simon Armitage has written his own version of this ancient poem, complete with updated language and the very necessary alliteration. I have ordered it, because I know, from this documentary, that it must be well worth reading. Thank you, Simon and the BBC for an hour of pure enjoyment and beauty.

I have now received and delved through Simon Armitage’s updated version of Sir Gawain and the Green Knight and it has lived up to my hopes. Of course, there have been other such updates, but in my opinion they do not compare. As for the original in Middle English, well, it’s beyond me completely. The following describes the startling arrival of the Green Knight at the Christmas feast in Camelot.:-

An oþer noyse ful newe neȝed biliue,
Þat þe lude myȝt haf leue liflode to cach;
For vneþe watz þe noyce not a whyle sesed,
And þe fyrst cource in þe court kyndely serued,
Þer hales in at þe halle dor an aghlich mayster,
On þe most on þe molde on mesure hyghe;
Fro þe swyre to þe swange so sware and so þik,
And his lyndes and his lymes so longe and so grete, [folio 93r]
Half etayn in erde I hope þat he were,
Bot mon most I algate mynn hym to bene,
And þat þe myriest in his muckel þat myȝt ride;
For of bak and of brest al were his bodi sturne,
Both his wombe and his wast were worthily smale,
And alle his fetures folȝande, in forme þat he hade,
ful clene;
For wonder of his hwe men hade,
Set in his semblaunt sene;
He ferde as freke were fade,
And oueral enker-grene.

Hmm, yes. Totally beyond me. Whereas the same passage from Simon Armitage’s book brings it all wonderfully to life for my modern self:-

Because another sound, a new sound, suddenly drew near,
which might signal the king to sample his supper,
for barely had the horns finished blowing their breath
and with starters just spooned to the seated guests,
a fearful form appeared, framed in the door:
a mountain of a man, immeasurably high,
a hulk of a human from head to hips,
so long and thick in his loins and limbs
I should genuinely judge him to be a half-giant,
or a massive man, the mightiest of mortals.
But handsome too, like any horseman worth his horse,
for despite the bulk and brawn of his body
his stomach and waist were slender and sleek.
In fact in all features he was finely formed
it seemed.
Amazement seized their minds,
no soul had ever seen…
a knight of such a kind –
entirely emerald green….

So yes, I do recommend this book. Read and enjoy. 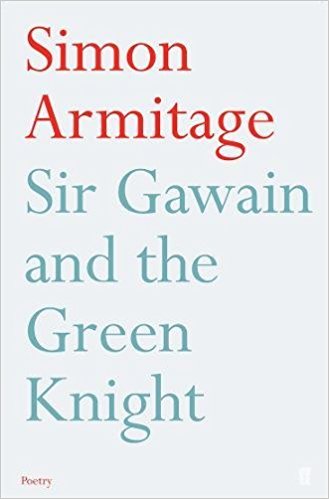