The Staffordshire Hoard.  One of the biggest hoard of Anglo Saxon artefacts every discovered.  See more of this hoard below..

A story has broken of four ‘metal detectorists’ who have been convicted of stealing a hoard of Anglo-Saxon coins and jewellery worth 3 million pounds, most of which is, tragically, still missing.  You can tell from the pictures of the stuff that has been recovered the quality of the still missing items, which now may never be recovered,  after probably being sold on the black market. 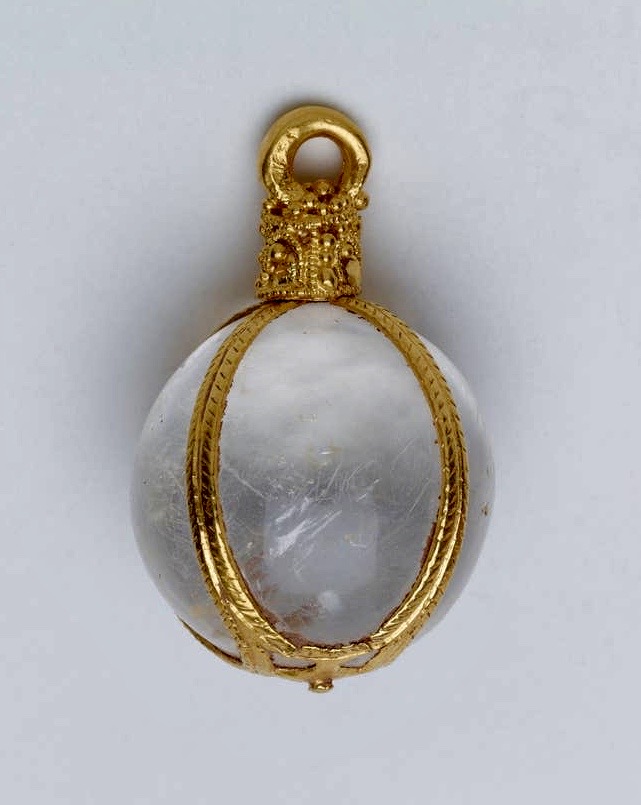 Gold arm bangle with a dragon or serpents head design dating from the 9th century..

A gold coin from the reign of King Alfred the Great..

Just before this story broke I was intending to write a story about metal detectorists that have made some wonderful discoveries and have done the right thing handing them over,  also being paid quite handsome sums.  I list some of these discoveries below.    Although I have had to mention the fact that a small handful of people wielding metal detectors have behaved despicably, for which they will now being paying the price –  long prison sentences –  the majority of finds are declared most of which would have lain undiscovered if not for metal detectorists.  So I say as long as they behave honourable and do not disturb places of historical importance then long may they continue to find beautiful items of great historical interest. 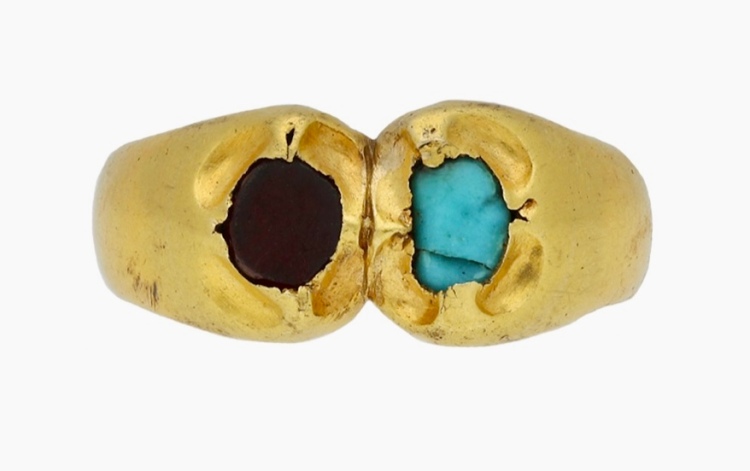 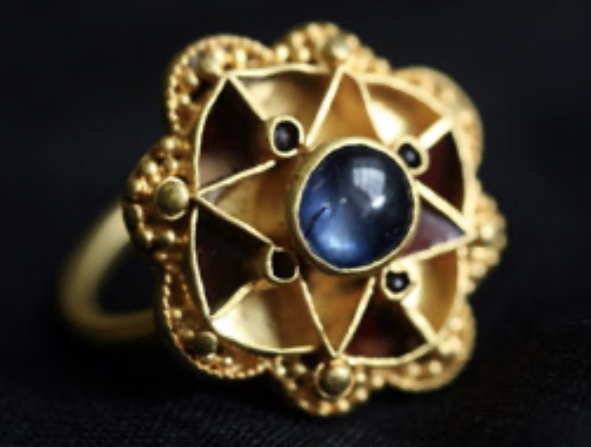 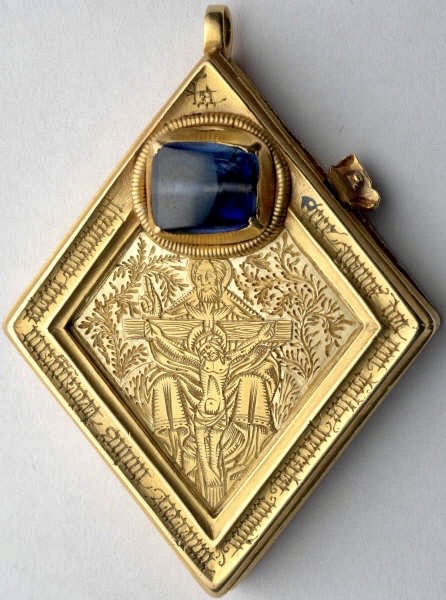 The famous Middleham Jewel.  Gold with a sapphire.  Dated between 1475 and 1499.  Discovered in 1985 near Middleham Castle.  Now at the York Museum. 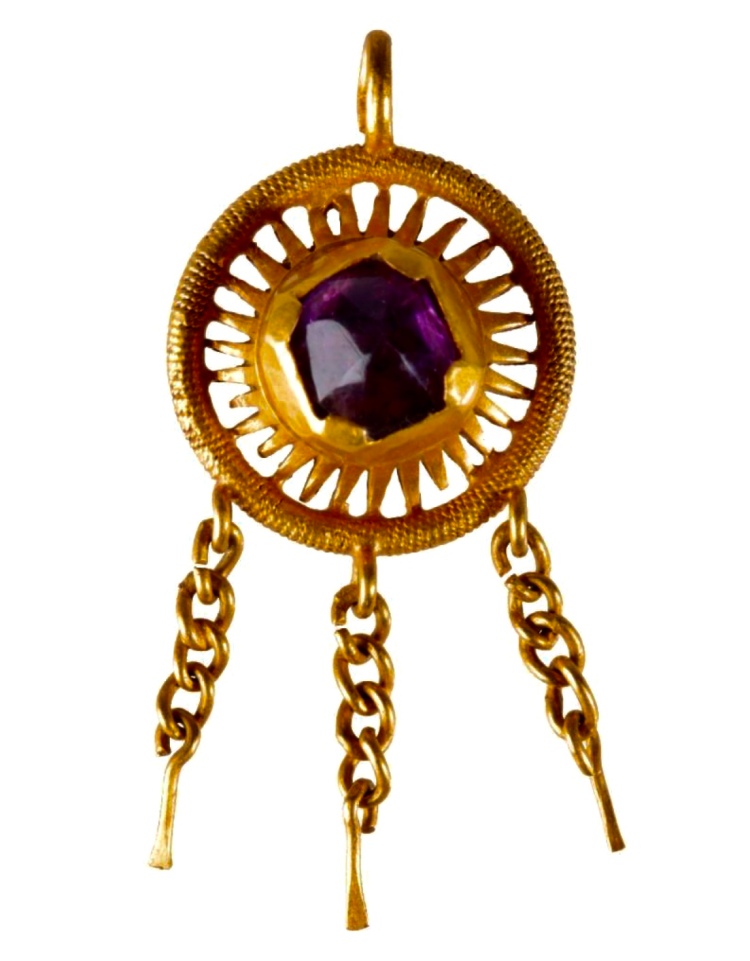 Gold Brooch – two hands clasped together, note the decorative sleeves.  Only the size of a pound coin.  Found in a field in Cheshire.  Circa 1350.  Thought to be a betrothal gift.

A fitting from hilt of a Seax (a large single bladed knife) – one of the items from the Staffordshire Hoard  discovered in 2009 in a field near Lichfield and the largest collection of Anglo Saxon Gold and silver to be ever discovered.

A helmet from the Staffordshire Hoard and fit for a King..

The helmet has been reconstructed as it was  badly damaged before it was buried. 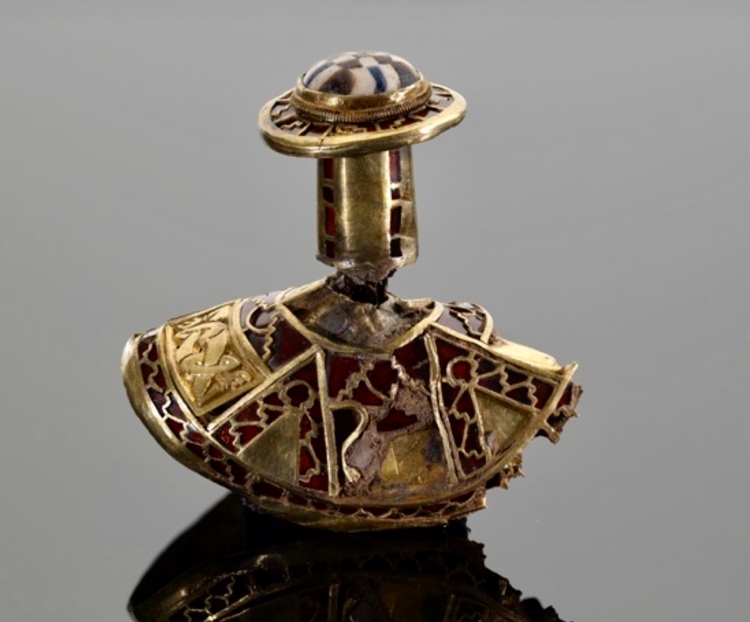 A mystery object from the Hoard that has left archaeologists  baffled.    Suggestions have been the lid of a container, an extension of a helmet, a saddle fitting?

And so its clear that metal detectorists are a valuable asset in recovering lost treasures frequently  alerting archaelogists to a site and further finds that would have remained undiscovered.  How many more finds are out there awaiting the intrepid metal detector to discover them?  Bring it on!