We all know that Richard’s cognizance was the white boar with gold tusks and bristles but there are several theories as to why he chose this as his personal symbol. There are also a large number of interesting associations which connect the boar to Richard.

There is one theory that the white boar had already been a royal badge of the Honour of Windsor, although I don’t believe there is a reliable source for this view.

A second theory is that, as it seems, Edward III (from whom Richard was descended) had a blue boar as his cognizance and it is possible Richard inherited this but, as the youngest son, needed to difference it, making it white to represent loyalty and purity of heart. Also, white was already a colour associated with York in the white rose.

Another idea suggests that Richard might have seen a carving of a boar on a pew at the Church of St Mary and All Saints in Fotheringhay, where he was born, and this is what prompted him to choose it as his cognizance.

A fourth theory is that it was a pun on the word Ebor (a shortened version of Eboracum, Latin for York). This may have been true and is certainly possible. There is also the possibility that the Latin name, Eboracum (based on the native British name for the site, which originally meant ‘Place of the Yew Trees’) was corrupted by the Anglo Saxons and subsequently had the meaning of ‘place of the boar’. Even more interestingly, although Market Bosworth in Leicestershire was named from the Old English Bosa (a surname) + Old English worð ‘enclosure’, Husbands Bosworth in Leicestershire asserts that the name ‘Bosworth’ comes from the Old English word Bar (from bar ‘boar’) + worð, therefore meaning ‘Boar enclosure’.

But what of the creature itself? The wild boar has appeared in many cultures throughout the ages as symbols of luck, fertility and prosperity. The Celts considered the boar to be one of their most important sacred animals.

A magical boar called Gullinbursti was given to the Norse fertility god, Freyr, by the dwarves. Its bristles were so bright they would light up the night sky.

Herakles’ third labour involved the capture of the Erymanthian Boar.

Adonis was killed by a boar and Odysseus is recognised (while disguised) by the scars he had received when hunting a boar in his youth. Interestingly, in Irish and Egyptian mythology, the boar is explicitly linked to the month of October, the month of Richard’s birth.

It is supposed that the boar was extinct in the wild in England by Richard’s time, although there have been later attempts to re-introduce it. Even if Richard was not familiar with it as a game animal in England, he may well have encountered some during his time in Burgundy and France, where they are still living in the wild. Recently, there have been various escapes of captive wild boar and one of the largest groups know living in the wild in England is in the area around Gloucester, Richard’s Dukedom.

The boar was considered a formidable adversary for the hunter, as it would not try to run when cornered, but charge the hunter, not even pausing if it had been speared by a long pike. Apparently it goes for the groin and serious injuries and even death could result for the hunter. Thus hunting it was also seen as a kind of initiation into manhood. It is intelligent and fiercely brave, especially when defending its family and perhaps this was why Richard chose it.

The boar is mainly nocturnal and hides out in a shallow dug out hollow of leaves and branches in the daytime. Boar society is matriarchal and the leading female leads a group of related females and their young (the group is called a sounder) foraging for food. They also like to wallow in mud.

The males are mainly solitary and are driven out by the females when they are approaching maturity to ensure the gene pool is mixed. And, of course, Richard was also sent away from his family when he was growing up, to learn how to be a warrior (and he also found his mate there).

Boars are omnivores and eat everything from grass to frogs to crops to mushrooms to fish. The young are striped and are extremely cute.

As they grow their coats turn a reddish colour and finally darken to a dark brown.

Their tails are not corkscrew-shaped, like those of domestic pigs, but straight and they have large curved tusks which protrude from their mouths. They really do foam at the mouth when angered.

In mainland Europe where they are still found in the wild, they are often a nuisance, because they dig up crops and wreak destruction. In France, where the boars’ only natural predator (aside from man), the wolf, is extinct, it has allowed the boars to go unchecked and they impact on farmers and others. In neighbouring Spain and Italy, where wolves still survive, boars are not so prolific or destructive. They are still hunted in Europe, no longer with spears or bows and arrows, but guns. Boar meat is considered a healthy alternative to pork as it is less fatty, richer and has more essential amino acids. The boar’s head was apparently a favourite Christmas dish in mediaeval times, and there is a well-known carol that mentions it: ‘The boar’s head in hand bear I…’

There are many examples of depictions of the boar in art and one of the most famous is Il Porcellino) the nickname means ‘The Piglet”) in Florence. This is a bronze boar which is popular with tourists who rub its nose for luck – it is said that if you do you will return to Florence. 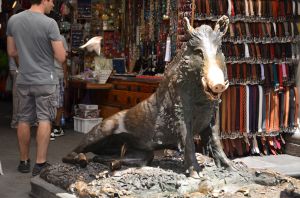 (By RalfSkjerning (Own work) [CC BY-SA 3.0 (http://creativecommons.org/licenses/by-sa/3.0)%5D, via Wikimedia Commons)

I have just read a very interesting book called:The Golden-Bristled Boar by Jeffrey Green, which I highly recommend. Its subtitle is: The Last Ferocious Beast of the Forest. Here is our final parallel with Richard for he was the last warrior King of England, showing the same ferocious bravery as the boar, charging his attackers and refusing to run, and ultimately being slain and dishonourably treated ‘like an hogge’ by his enemies. His family, too, was all but wiped out in England but, like England’s native boar, York or Ebor is rising again!