Archive for the tag “Thomas Mitton”

Another myth about men “not breaking oaths to Richard”. . . . 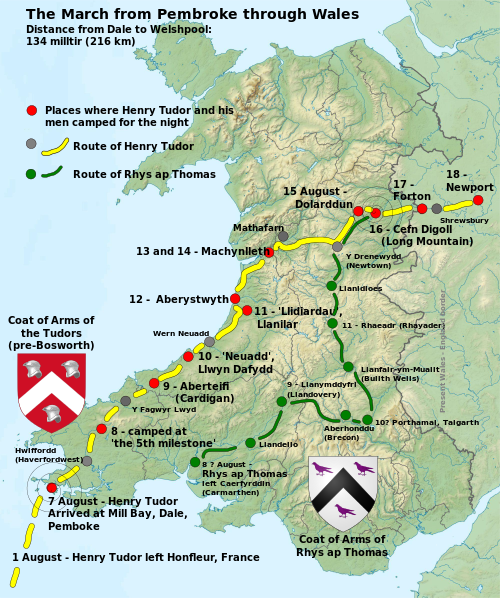 Well, I’ve heard the tale of Sir Rhys ap Thomas hiding under a bridge for Henry to march over him on the way to Bosworth, thus not breaking Sir Rhys’s oath of loyalty to Richard, but this is a new one on me!

Now we have this new variation, from  http://tudortimes.co.uk/military-warfare/1485-battle-of-bosworth/henrys-march :-

“. . .when Henry, now strengthened by Sir Rhys ap Thomas, and a contingent of men from North Wales, reached the town of Shrewsbury, to cross the Severn into England, the town gates were closed against him and the town bailiff, Thomas Mitton, announced that, as he had sworn allegiance to Richard, he could not allow Richmond to pass.

“The closure of the town of Gloucester to the Lancastrians in 1471, preventing the crossing of the Severn, had proved disastrous for them – would the same be the case for Henry at Shrewsbury? Henry assured the bailiff that he and his men would do no damage and that they would not interfere with his oath, but Mitton was adamant.

“The next morning however, there was a change of heart. . .due to the intervention of Sir William Stanley.

“Henry and his men passed through – apparently with Henry stepping his horse carefully over Mitton’s body, to preserve the word of the man’s oath – although the same story is told in other circumstances of other men, so may be apocryphal. Impressed by Henry, or perhaps cowed by Sir William, the town then paid £4 4s 10d for soldiers for him. . .”

Traitors’ Gate, Shrewsbury town wall. Let’s hope it was the one Henry passed beneath!

But the above site is not the original source for this story. There is an earlier one.

“An interesting anecdote of Thomas Mytton is related in the following extract from Owen and Blakeway’s History of Shrewsbury, vol. i, p. 245, describing the incidents of the Earl of Richmond’s (Henry VII) march through Shropshire to Bosworth Field:- “He delayed his march to Shrewsbury till he was master of Forton and Montford Bridge, two points of main importance to his designs, as he was thus provided with a passage into the midland counties, even though this town should shut her gates upon him. Having secured that bridge, which, if the Salopians had been hearty in the cause of Richard, they would have broken down, his army encamped upon Forton Heath, and he despatched messengers to Shrewsbury to summon the town. When they arrived at the foot of the Welsh bridge, they found the place in a posture of defence; the gates shut, the portcullis let down, and the bailiffs within ready to give their answer. “The senior of these magistrates for that year was Thomas Mytton, Esq., whom we have lately seen as Sheriff of the county, engaged in the arrest of the Duke of Buckingham. He is described in an old chronicle as ‘ a stout wise gentleman’, and made answer that he knew the Earl for no King, but ‘ only Kynge Rychard, whose lyffetenants he and hys fellowe weare, and before he shoulde enter there, he should goe over hys belly’, meaninge thereby, continues our authority, ‘ that he would be slayne to the grounde and so to (be) roon over (by) him before he entryd; and that he protested vehemently upon the othe he dad taken.’

“Much conversaton, we may suppose, ensued, but Mr. Mytton continuing resolute, the Earl ‘ retornyd’, says our chronicle, ‘ wyth hys companye backe agayn to Forton . . . .’ On the following morning the negotiation with the Bailiffs of Shrewsbury was renewed, and the Earl assured the magistrates that he did not mean to hurt the town or any of its inhabitants, but only desired to pass on to try his right to the Crown. We are told that Mr. Mytton began to yeald to these suggestions, but that on account of the oath he had so lately taken to oppose the entrance of Richmond into Shrewbury, he adopted the ingenious expedient of lying down on the ground and permitting the Earl to step over him. Thereupon the portcullis was drawn up, and the Earl and his retinue admitted within the gates, to the general joy of the inhabitants, and received, we are assured, ‘ with an Ave chaire (Xaipe), and God speede the wel! the streets being strowed with hearbes and flowers, and their doores adorned with greene boughs, in testimony of a true hartie reception.'”

Well, Henry was still some way from Bosworth, so I imagine there are a few more such myths waiting in the wings. They’ll be throwing their cloaks over puddles next! Or dropping their garters!