A SAINT’S SHRINE IN OXFORD

Oxford’s Christ Church Cathedral lies in the precincts of  the college of the same name. Originally it was the church of St Frideswide’s priory, and contained a shrine bearing the saint’s relics. This shrine was destroyed in the reformation but has since been pieced together as much as possible. The remains include some rare carvings of the ‘natural world’ including heads wreathed in foliage which may  represent Frideswide and her nuns. Next to the shrine is what is called a ‘watching chamber’, where someone would keep watch over the gold and jewels that decorated the saint’s shrine. The watching chamber was built in the late 15th or early 16th century, possibly  by none other than the infamous Bishop John Morton…

Frideswide was a particularly venerated in the Oxford area, and  one of Francis Lovell’s sisters bears her name.

The church also contains several notable medieval burials, including the beautiful tomb of Elizabeth de Montfort (died 1354), Baroness Montacute, an ancestor of  Richard Neville–Warwick the Kingmaker. Bright colours remain on the  tomb-chest even today–although the faces were all smashed off the carved weepers during the Reformation. The numerous weepers once depicted Elizabeth’s children.The remains of a chantry chapel with a painted vaulted ceiling extends from  the Baroness’tomb.

There is also the effigy of an enormous knight whose identity is not known for certain–it is given as Sir Henry de Bathe or Sir George Nowers,  a companion of the Black Prince who died in 1425. (It is more likely to be the latter. )Whoever it was, the armour detail is very fine and the skeleton within was about 6ft 8! 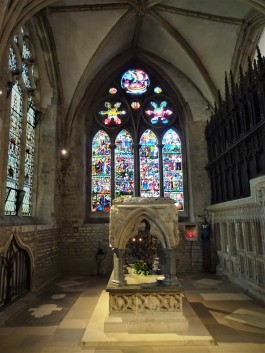 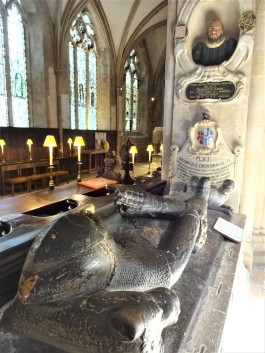 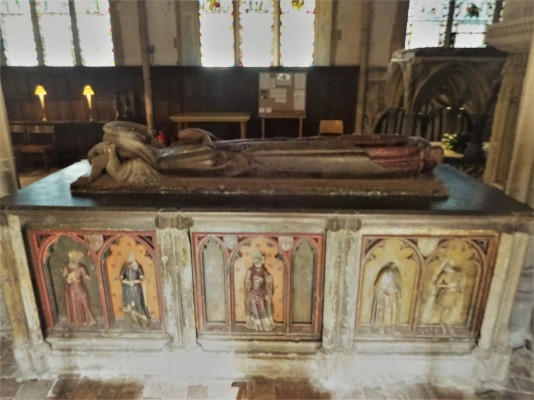