Archive for the tag “serial killers”

Serial bigamy and murder again – the Henry VIII of Chicago?

On the left is Herman Webster Mudgett, alias H.H. Holmes, an American serial killer executed in May 1896 whilst a few days short of his thirty-fifth birthday. On the right is the “murder castle”, 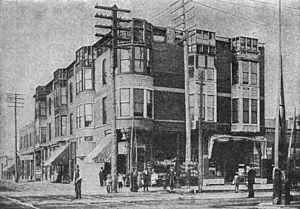 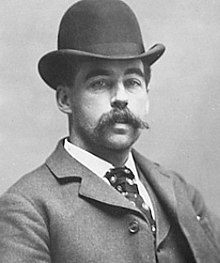 replete with trapdoors, sealed rooms and poison gas, he built in Chicago for the 1893 “World’s Fair” and from which at least nine people failed to emerge alive. Mudgett, a serial fraudster even before the disappearances began, confessed at one stage to killing far more people but later to just two murders. Unlike Henry VIII, George Joseph Smith and Crippen, he didn’t kill any real or imagined wives. The “murder castle” concept was later adapted in France by Marcel Petiot, who was also medically qualified.

Just like Smith, Mudgett made one proper marriage and it was never dissolved despite his abandonment of Clara Loveridge and several subsequent “marriage” ceremonies. As a result, she became his widow when he was hanged, although two other women imagined themselves to have that status. The castle was demolished and its grounds now abut a post office at Englewood.

The neighbourhood surrounding the area has since become one of the worst in Chicago.   Englewood sadly has one of the highest crime rates in said fair city.   (Ahem).   Perhaps Homes ghost is roaming as some say Henry’s is… 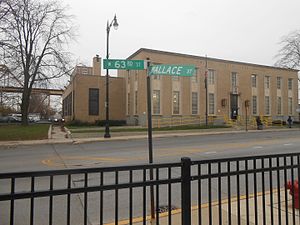 Following the comparison between the remains that purport to be Edward IV’s sons and those that purported to be Mrs. Crippen, we revisit early C20 crime, although in this case we can be sure that a crime took place.

George Joseph Smith was born in January 1872 and contracted a legal marriage in 1898, to Caroline Beatrice Thornhill of Leicester. Although he abandoned the real Mrs. Smith several times, he did not harm or divorce her so she was to become his widow in August 1915 when the trapdoor opened. Margaret Elizabeth Lofty of Highgate, Beatrice Munday of Dorset and Alice Burnham of Blackpool were less fortunate. All drowned in their bath, a few days after “marrying” Smith and during his supposed absence on an urgent erand

Critically, Mr. Justice Scrutton allowed evidence to be introduced that Smith had followed the same procedure in all three cases: “evidence of system”, by which the evidence in one case strengthened that in the others. He was convicted solelyof murdering Beatrice Munday but a precedent was created. There were other bigamous “wives” but Smith had been able to defraud them and flee.