Archive for the tag “River Darent”

How did the Black Prince’s funeral procession cross the River Darent….? 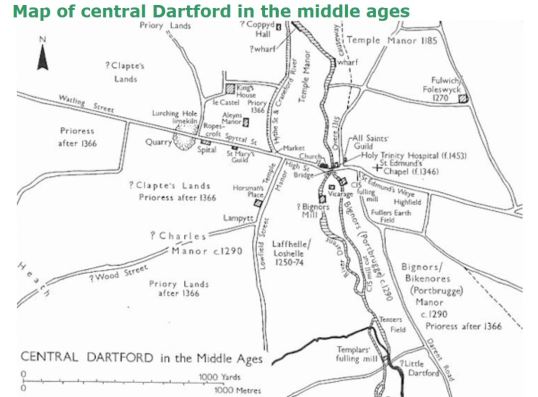 Does anyone out there know the answer to a puzzle that has cropped up in my research? Watling Street, the Roman road, was the main route between London and Canterbury, Dover, etc. This made it very important. Watling Street passed through Dartford, crossing over the tidal River Darent. But wait, there wasn’t a bridge there until the reign of Henry VI. There was a ferry. Does this mean that before then, every traveller on the road, royalty and all, had to use the ferry? The river was tidal, so did they have to wait for suitable water for the ferry to cross? I can’t see that wading across at low water would be advisable in all that mud…and certainly not for the royal hearse drawn by twelve horses that passed through Dartford in 1376! It all seems very unsatisfactory for one of the main roads in the land. And very undignified for the great Edward of Woodstock, known to us as the Black Prince, who was being mourned throughout the realm.

Yes, I know there were  other rivers to cross elsewhere in England, and other ferries instead of bridges, but I am concerned with this road, river and ferry.

In September 1376, the prince’s great funeral procession went through Dartford on its way to Canterbury. Depending on the size of the ferry, such a vast cavalcade would have taken ages to cross. Granted, Dartford was probably the first overnight halt out of London for this ponderous cavalcade, but even so, the bridgeless Darent must have caused a bottleneck second to none.

Researching (meaning my way of researching, which is pretty amateur) Edward of Woodstock’s funeral has produced only what he instructed in his will. Plus I know how long it took, i.e. arriving in Canterbury on the fourth day after setting out. But then, full stop. Oh, there is more available about the actual arrival at journey’s end, but that is not the part of the proceedings with which I am concerned. The actual mechanics of the first three days of the journey, if covered by anyone, have eluded me.

And when the funeral cortege halted, would the prince’s coffin be placed overnight in Holy Trinity church, which is right next to the Darent crossing? Or would it stop on the northern outskirts of the town, where there was a royal palace/house, with appropriate land/space for all the people and horses? Or was it a mix of both – the prince in the church, everyone and everything else in the royal house? To say nothing of filling up the rest of the town as well. Dartford must have bulged at the seams. All the royal family, all the higher nobility, lots of lower nobility, the denizens of Parliament, priests, and all sorts of other Toms, Dicks and Harrys.

Oh, questions, questions! I want to be accurate in a description of all this, and would love someone to “conjure” an earlier bridge into existence. A vain hope, I fear.

So, if anyone knows anything at all, please let me know.