Archive for the tag “religious persecution” 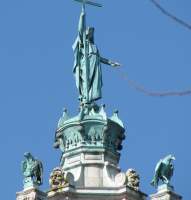 Like other towns near the east coast, Colchester was partially settled by Hugenot refugees from the Low Countries in the sixteenth century. The Dutch Quarter is defined as being to the immediate north of the middle of High Street, as West Stockwell Street turns off at the Town Hall. This Victorian structure has six historic statues, from Boudicca to Harsnett, together with some abstract statues and St. Helena (left), mother of Constantine I, on the roof. She is, improbably, said to be the daughter of “Coel”, a local chieftain, although her birthplace in the Middle East is quite well established. 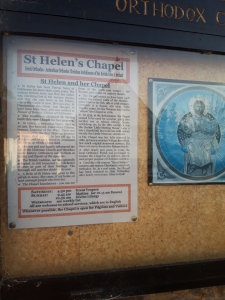 John Ball Walk and Wat Tyler Walk, commemorating the Peasants’ Revolt leaders the former of whom had an Essex connection, lie at the lower end of West Stockwell Street. 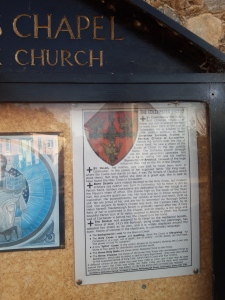 The nearby St. Helen’s Lane incorporates a church, now part of the Russian Orthodox Church, dedicated to the Empress.

They say every writer should find a niche. Unfortunately, certain ‘popular historians’ seem to have leapt onto  ‘gimmicks’ than a niche and write all or most of their books in similar vein, often to the detriment of their work and a growing lack of credibility with each further tome.

A trend amongst several notable authors seems to be the cynical and sarcastic slagging off of the historical figures they write about, most likely to stir up controversy in the hopes of making sales—who knows? Any sense of being non-partisan or unbiased is thrown out the window pretty much on page 1.

‘Jack of All Trades’ history writer Desmond Seward (Demon Sewer? Dismal Sewage?) is a prime offender. Most of us will remember Demon’s jaw-dropping book on Richard III, titled, so menacingly…’The Black Legend’. (Oooh, shades of Sauron and Mordor!) Without tramping over old turf, this totally unbiased (choke) book contains such wonderful remarks as (paraphrasing here), ‘If he was two fingers shorter than Richard, Von Poppelau must have been a dwarf…’ In his updated version of the same tired tosh he chides Ricardians for seeking the truth about Richard because “…the White Legend continues to appeal to every Anglo-Saxon lover of a lost cause and, in particular, to lady novelists.” (Very odd application of ‘Anglo Saxon’ as well as showing an unpleasant Starkey-esque strain of sexism.) He also is a true believer in the words of the sainted Thomas More because he was, after all, a SAINT, so presumably infallible—yes, the ‘saint’ who burned people at the stake and poetically wrote long insulting tracts containing multiple references to faeces. True story. What a scholar. What a charmer.

Recently Sewer returned to the Wars of the Roses period with a new book, THE LAST WHITE ROSE, and continued in the same vein, with a combination of vitriol and errors. Edmund de la Pole was apparently haughty, pompous and unintelligent (the latter deduced apparently from his bad handwriting!) John, Duke of Suffolk was called a nonentity and given the wrong date of death. John of Lincoln was saupposedly devious, and even accused of abducting the young, hapless Lambert Simnel from his family! (Sewer appears to believe there really WAS a child ridiculously named after a cake, even although the surname is rarer than a blue moon and there is no record of any family by that name). Worst of all, however, is a supposed quote from Croyland about Elizabeth of Suffolk, complete with page number. It does not exist in Croyland, if anywhere at all, yet is masquerading as a quote from a primary source!!

I haven’t read all of Demon Sewer’s books, needless to say, but some of the customer reviews are noteworthy and often rather hilarious. Apparently any strong women in history are described as ‘viragos’ or worse. In his Eleanor of Aquitaine bio, not only does he seem to dislike Eleanor herself, he has a bit of a fixation with Richard the Lionheart’s homosexuality. Which is a bit odd, as there is no actual evidence that Lionheart WAS homosexual, and that theory of the mid-20th century is pretty much discredited today. In fact, there is some evidence that Lionheart, in his misspent youth, ravished his enemy’s wives and then gave them to his men!

Perhaps the funniest error Dismal made, though, was found in one of his other books, The King over the Water, which is about the Jacobites. Apparently, he wrote that  the maternal grandparents of Lord Derwentwater were Charles II and Moll Flanders. MOLL FLANDERS? She is a character in a novel by Daniel Defoe!

Maybe Dismal should write a book on Moll next. Non-fiction, of course.

HENRY VIII: THE EVEN HANDED PERSECUTOR

Some folks out there have recently been trying to justify the long list of people executed by Henry VIII  because ‘at least they had a trial’ or ‘because it was over religion, and there were always beheadings, pressings, burnings over religion.’

Well, surprisingly, I must agree with them on one thing. Henry sure could be fair and evenhanded.

He dealt out his brand of ‘justice’/punishment to both Catholics and Protestants, peasant and nobles, strangers and relatives, men  and women, and young and old alike!

From the Protestant side, the list of victims  include twelve clergymen, 3 monks, 2 lawyers, a courtier, several servants, an apprentice, a leatherseller and a tailor, a player and a musician, a painter and a mercer. Poignantly, there is also listed a poor artificer and a poor labourer, a  wife, a man called Valentine Freese alongside his wife, a child under 15 called Richard Mekins, and an ‘aged father.’ All were burnt at the stake save for the ‘aged father’ who had his brains bashed out prior to the fire taking hold. (I presume this was meant to be merciful.)

From the Catholic side, we have a list of well over 200, mostly priests and monks, but also the Nun of Kent, and some laymen and laywomen, including  67-year-old Margaret Pole, who was charged with nothing but faced death because her son was out of vengeful Henry’s reach.

Of the ‘rich and famous/infamous’ there are approximately 25 executed nobles and some ordinary folk  connected with the  supposed nobles’ misdeeds,  such as  Mark Smeaton, who was tortured into confessing a fling with Anne Boleyn.  The executed include Edward Stafford, son of Henry Stafford, the Duke of Buckingham (who raised rebellion against Richard III) , Thomas More, Thomas Cromwell, de la Poles and Poles (including a young boy who was imprisoned in the Tower and was never seen again…he might be there still*!), a Courtenay and a Hungerford (both  of these families had helped Henry’s father to his throne), Jane Boleyn, and of course wives Anne Boleyn and Catherine Howard.

As we can see,  Henry was a very even handed chap indeed. No one got favouritism. No one got out alive.

I would highly recommend this documentary by Janina Ramirez, whose book on the subject will soon be available

. She showed how Julian, who was female by the way, was born during the fourteenth century. She may well have had a husband and children but lost both to the Black Death before becoming an anchoress at St. Julian’s, Norwich.

Ramirez spoke about Julian’s magnum opus: Revelations of Divine Love, the first known book in English by a female author, quite revolutionary in tone and probably composed during the reign of Richard II and prominence of John of Gaunt. On the deaths of these two men, the religious atmosphere changed dramatically. Under the Lancastrians, Lollards were regularly burned and already being dead, as Wycliffe could testify, did not ensure safety. Julian would have been in great danger if her manuscript had been read more widely at this time.

She died early in Henry V’s reign of natural causes and was probably in her seventies at the time but the story does not end here. Her manuscript was taken to France to avoid the Reformation only for the French Revolution to strike. The nuns caring for the document saw some of their French sisters mount a tumbril and return in two pieces for their burial. The manuscript re-emerged during the last century, to be viewed as a feminist tract.