Archive for the tag “Meath”

IS THIS THE FACE OF KATHERINE de VALOIS? 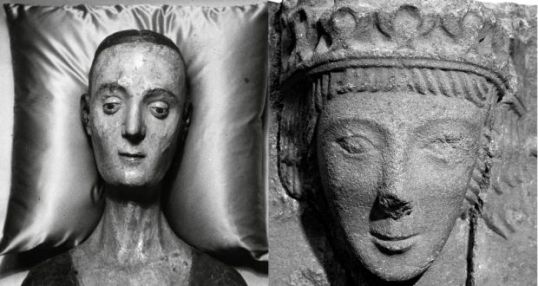 Catherine de Valois wooden funeral effigy on the left and the stone head thought to represent her on the right.

Westminster Abbey is the home to a collection of unique and wonderful medieval wooden funeral effigies.  These are to go on show once again in June 2018 with the opening the Abbey’s new Jubilee Galleries.  Some of them are definite death masks such as those of Edward III and Henry VII although there is very little doubt that they are all portraits of those they represent (1).  The one I am focussing on here is that of Katherine de Valois, wife to Henry V.  There are few if any surviving portraits of Katherine so her effigy is especially interesting as to how she actually looked.  To give a brief résumé Katherine’s remains were removed from their original burial site in the old Lady Chapel when it was demolished to make way for Henry Tudor’s grandiose new Chapel.  They were then left above ground, next to her husband’s monument for the next two hundred years.  Samuel Pepys recorded in his diary on visiting the abbey he was able to take Katherine in his arms and kiss her on the lips.  Poor Katherine.  Eventually in 1778 Katherine was placed in a vault.  Finally in the 19th century, Dean Stanley had her reburied beneath the alter in her husband’s chantry.  Thank goodness for that!

Now fresh interest has recently been ignited by the discovery of a stone head in Meath, Ireland, which is believed to represent Katherine. Here is an interesting article covering the story.

Take a look at the wooden effigy and the stone head,  compare and judge for yourselves.