A breathtaking masterpiece of Tudor megalomania. . . .

I have been prompted to write this article after happening upon Visions on the horizon of desire: a painting of Henry VII & his family in the presence of St. George, by Margaret Milne Wood, 2001. See here.

The subject of the work is the enigmatic painted panel of Henry VII and his family (see below) that is to be found in Mary, Queen of Scots’ bedchamber at Holyrood Palace, Edinburgh. But, in passing, it also comments on Henry’s glorious chapel at Westminster Abbey, which is described in the words of my title above. “…the entire Lady Chapel at Westminster Abbey is a breathtaking masterpiece of Tudor megalomania…”

Well, I have heard the chapel described many ways, but never quite like that. 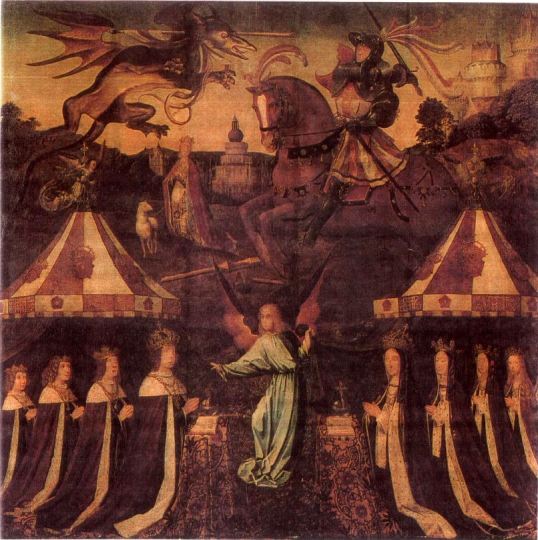 Anyway, that is by the by, because I am more concerned here with the votive altarpiece in Mary, Queen of Scots’ bedchamber. It depicts Henry VII, Elizabeth of York and all their children (dead and living), and was probably commissioned between February 1503 and January 1509, for a private chapel in Henry’s newly constructed palace of Richmond. Or alternatively, one of Richmond’s adjoining monastic foundations.

Other paintings, tapestries and so on are discussed as well, but the main focus all along is the Holyrood altarpiece. Toward the end, mention is also made of the Whitehall mural, destroyed by fire but preserved in copies, such as this below. The mural had an inscription, which began: “If you find pleasure in seeing fair pictures of heroes, Look at these!” Um, heroes? ‘Fraid not – well, not to this loyal supporter of the white rose.

The author does Richard III no favours, he’s the lustful, incestuous dragon in the altarpiece, but then she isn’t exactly complimentary about Henry VII either. You will need to persevere with the author’s long examination of Tudor art. Her descriptions of the altarpiece are lurid to the point of being purple prose, and seem to have leapt out of the pages of a 19th-century Gothic novel. A lot of it went over my lowly head, because I never seem to look at art and see what others see. And be warned, you’ll need a dictionary! And stamina.