Archive for the tag “Lorraine” 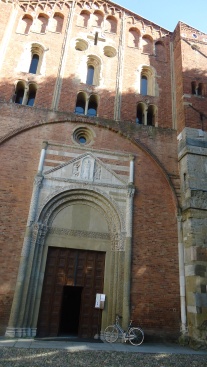 his capacity as the last free son of John, 2nd Duke of Suffolk, and as an exile from the England of the first two “Tudors”, before dying at Pavia and being buried in the Basilica of San Pietro in Ciel d’Oro there (right).

From Lord Richard’s Wikipedia page, it appears that someone else has noticed the coincidence between his early exile in Hungary and the Hungarian guests at Marguerite‘s 1539 marriage, so it possibly isn’t a coincidence. Marguerite’s fecundity and long life testify to her youth in that year, although they still don’t quite prove her paternity. Perhaps her mother has finally been identified?

If we thought that Richard III had a horrific end to his life, just take a look at the death of Charles the Bold.

It is tempting to think that the British Isles contain all the sites associated with Richard III’s life. Of course, that’s not true. Richard lived abroad twice, first in 1461 and again in 1470-1. On both occasions, he had fled England in order to save his life and wound up living in lands controlled by the Duke of Burgundy.  The Duke, a descendant of a junior branch of the French royal house of Valois, maintained the most glamorous and sophisticated court in all of Europe.  So powerful were the Valois-Burgundian dukes that when Edward IV became king, he betrothed his sister Margaret to the heir of that duchy.

Charles the Bold, Duke of Burgundy (1433-1477). His third marriage was to Margaret of York, Edward IV’s and Richard III’s sister. He would be the last of the Valois dukes of Burgundy.