Archive for the tag “Leo of Rozmital” 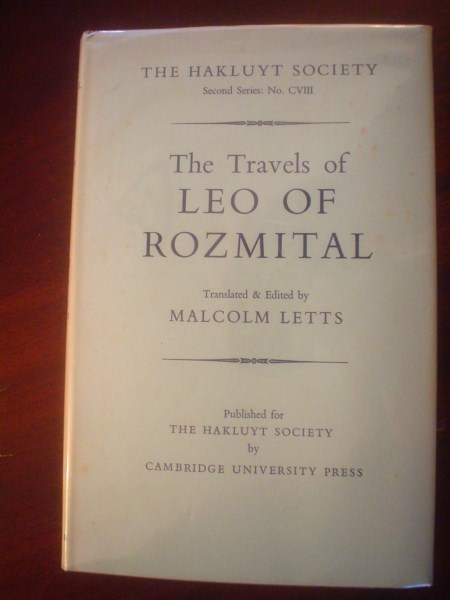 The Travels of Leo of Rozmital in the 15th century are fascinating, and if you register (free) for a virtual library card here you can read about them for 14 days. You can access up to five books all told.

Between 1465 and 1467 Leo (a Bohemian nobleman and celebrated jouster who died this day in 1486) undertook diplomatic missions for his brother-in-law, the King of Bohemia. He and his companions kept meticulous records of their travels. You can find out more about him here

Anyway, my reason for dipping into his travelling records was to glean all the information I could about travelling in Europe in the medieval period. My year of interest at present is 1394, but nothing much changed between then and the reign of Edward IV. This is how I happened upon the following passage:-

“. . .Edward IV was known for his lavish hospitality, and when the travellers had been luxuriously lodged in an inn, and had been kissed by the hostess and maids, they were formally welcomed by a herald and certain Privy Councillors. They were then given audience of the King and invited to a mighty banquet with sixty dishes, after which the King bestowed collars or badges (symbola) on his guests and knighted certain of them. He would have knighted others, but the honour was declined, perhaps on account of the fees. Later, at court, they saw Elizabeth Woodville churched in great state after the birth of the Princess Elizabeth. Another banquet was prepared, at which Warwick, the King-maker, acted as host, and after this they were conducted to an alcove, which which they watched the Queen at dinner. So strict was court etiquette that even the Queen’s mother and the King’s sisters had to kneel before the Queen while she was at table, and not a word was spoken during the whole meal, which lasted for three hours. Afterwards there was a state ball, at which Margaret of York (soon to be married to Charles the Bold of Burgundy) and other ladies danced. Then music was provided by the King’s choristers, and Tetzel tells us that here, and later at mass he had never heard such fine singing. . .”

I’m sure I can hear some medieval teeth-grinding! Warwick must have had a very fixed smile when it came to Elizabeth Woodville, and while I can imagine her mother, Jacquetta of Luxemburg, kneeling willingly enough to her, I think the King’s sisters would not have been so eager. More fixed smiles and grinding of teeth. Did they have to kneel there at her feet for three long hours? For their knees’ sake, I hope not.

There is a much more detailed description of this occasion between pages 44-49, including a mention of the queen being escorted by “two dukes”. Might these have been Richard and George? It seems the kneeling ladies were spared, being allowed to take their own seats as soon as the first course had been served to the queen. Thank goodness for that. But I’ll bet those of Edward IV’s blood were still not amused.

There is a lot more in this fascinating book—including many anecdotes, naughty and polite—and I recommend registering for a virtual library card. It is also available at Amazon.