Archive for the tag “Lampreys”

I wrote a blog post a good while ago about the love of lamprey in mediaeval times and ever since then I have wanted to try it. Well, in the summer of 2017, I finally got the chance.

We were visiting Bordeaux and had taken a river boat cruise on the Garonne river – the guide happened to mention that one of the fish caught in the river was lamprey and that it was a local delicacy so, after the boat docked, I asked her if she could tell me where I could get some. She said there was a restaurant called La Brasserie Bordelaise which served it, so we looked it up on the internet and checked the menu – it was quite an upmarket, expensive restaurant but, as it was our wedding anniversary, we decided to treat ourselves and booked a table.

The food generally was lovely and fully lived up to the rather expensive prices. The lamprey, cooked à la Bordelaise, was 32 euros! (If you don’t believe me, click here and scroll down – look for ‘Lamproie à la Bordelaise’ under the heading ‘Les Plats’). And when we looked at the wine booklet (I can’t really call it a wine list, it was that long!) we found a bottle of Château Petrus for a mere 2,500 euros! Needless to say, we decided not to buy that!

So, what did I get for my euros? Here are some pictures. 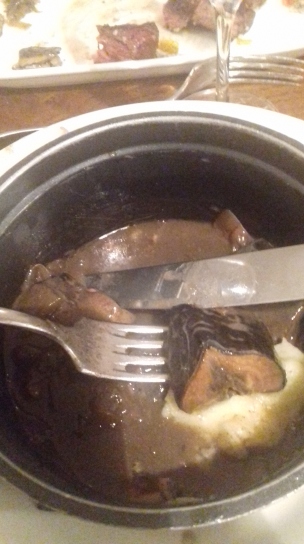 So, what did it taste like, you may ask? Well, to be honest, I can’t say I really know what lamprey taste like because all I could taste was the sauce it was cooked in, which was some kind of beef stock, onions and red wine. The nearest thing in taste I could compare it to is tinned oxtail soup! Yes, I paid 32 euros for something that tasted like a tin of soup! Anyway, at least I can say I’ve eaten it! And then I had this for dessert (yum!):

The latest on the search for Henry I in Reading