Archive for the tag “Kelso”

A contemporary of the House of York

James III of Scotland’s reign overlaps the whole of Yorkist rule in England, succeeding on 3rd August 1460, more than seven months before Edward IV’s first coronation, to 11th June 1488. almost three years after Richard III’s death at Bosworth and including Henry VI’s re-adeption. His uninterrupted reign spanned the decisive battles of Mortimer’s Cross and Stoke Field and was to end at the hands of his own countrymen, led by his eldest son, but it could have terminated six years earlier and the future Richard III would have been at or near the scene. He became King of Scotland in his minority, as did his successor, reigned in an era when the later “British Isles” consisted of only two nations (following Alexander III’s victory at Largs in 1263) and was killed a mere four miles from a Scottish triumph at Bannockburn.

James III’s reign began as his father was blown apart at Roxburgh by an exploding cannon and he was crowned at Kelso a week later. By most accounts, although Norman MacDougall disagrees, he was almost nine at the time. His mother was Regent for three years, during which Roxburgh Castle was dismantled and Berwick reconquered, before she too died prematurely, to be succeeded by the Kennedy brothers and then Lord Boyd. James’ 1469 marriage to Margarethe of Denmark was arranged by the Boyds, bringing the Orkneys and Shetland Islands to the Scottish realm and ending payment to Norway. James attained his majority and the Boyd influence continued, although some of their number were executed.

James established good relations with England and contracted his eldest son, James Duke of Rothesay, to Edward IV’s second daughter Cecilia. At the same time, he moved against the (MacDonald) Lord of the Isles and fell out with both his brothers – the Duke of Albany and the Earl of Mar. Mar died in suspicious circumstances and Albany left for France.

Edward IV then launched an invasion under the Duke of Gloucester, accompanied by Lord Howard and Albany. Berwick fell and has been part of England ever since. James sought to resist but was arrested at Lauder Bridge, near Thirlstane Castle, by some Scottish rebels, who hanged some of James’ favourites there and imprisoned him at Edinburgh Castle. The English army had made their point and left for home, taking Albany back into exile, eventually to France, where he died in a duel in August 1485. His son was later regent for James V and fought at Pavia.

James III had re-established his authority by that year, as Richard III and Norfolk died in battle that very month. James executed another Albany supporter, but the end was in sight as Margarethe died in 1486. By spring 1488, his sons were fifteen, twelve and eight. Another revolt evolved and this time the Duke of Rothesay was involved. A battle took place to the west of Stirling and James was either killed during the conflict or in flight. Rothesay succeeded him but this Stewart minority was to be mercifully short.

The Inspirational Borders and Lothians

via The Inspirational Borders and Lothians

The Antiques Roadshow goes to Floors 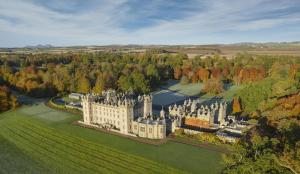 tself but the Antiques Roadshow is one of them. On April 29, the experts came to the majestic Georgian structure of Floors Castle, home of the Duke of Roxburghe and from which the ruins of Roxburgh Castle are visible towards the Tweed, including the holly bush (ilex aquifolium) marking the spot at which James II fell during the 1460 siege, his leg blown off by his own cannon.

Sadly, the programme didn’t highlight Roxburgh or the Holly but viewers were shown the stunning backdrop of the Cheviot Hills, as well as some interesting “finds”.