Archive for the tag “John Oxenford”

In March 1461, the Lancastrian forces of King Henry VI were decisively thrashed at Towton, the Yorkist army of King Edward IV winning the day after a bitter and close-fought battle. After that, England fell into the hands of the first Yorkist king. At least, that is what Edward would have liked. In truth, repeated incursions across the Scottish borders during which castles such as Alnwick and Dunstanburgh were quickly snatched continued for some years until the battles of Hedgeley Moor and Hexham in 1464 finally quashed Lancastrian assaults in the north. 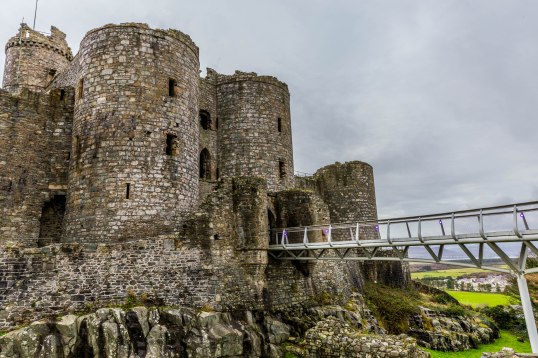 One place is often forgotten in the story of the Yorkist takeover of England and Wales. Harlech Castle became the last, stubborn enclave of Lancastrian influence in Edward IV’s kingdom and was not brought under his control until 1468. The siege of Harlech Castle is often cited as the longest siege in British history, but that doesn’t paint an entirely accurate picture. For most of the seven-year period from 1461-1468, the castle wasn’t under direct attack, though assaults did come sporadically. It is perhaps more accurate to consider the resistance of Harlech Castle as it being held against Edward IV for seven years.

Harlech became a crucial foothold for Lancastrians in the same way that Calais was important to the English in France. An enclave within territory otherwise belonging to the enemy was both precarious and vital. Part of Harlech’s success lay in geography that is very different to what can be seen today. Walking the open walls around the top of the castle offers a glorious view of the mountains to the north, the town to the east, the coast running away south and the flat plains to the west that lead to the sea. It is this western aspect that is substantially altered. In the fifteenth century, the sea came right up to the castle, as witnessed by the presence of the Water Gate just outside the castle’s western walls. From here, the castle could be restocked and relieved with little that the Yorkists could do about it. Jasper Tudor had been driven from the Welsh coast and was probably in Ireland at this point, providing him with the perfect vantage point from which to send supplies to Harlech and to get intelligence and rumours both in and out.

The garrison at Harlech was commanded throughout the siege by Dafydd ab Ifan ab Einion, a veteran of the Hundred Years’ War who appears to have served in Rouen. He has been linked to the forces commanded by another famous Welsh soldier named Matthew Gough, who had been killed fighting Jack Cade’s forces in London in 1450. In 1460, following the Battle of Northampton, Queen Margaret fled to Harlech Castle before escaping to Scotland and probably placed Dafydd in command at this point. Harlech became a sanctuary for dissident Lancastrians. In 1463, the Sir Richard Tunstall appeared there for about a year. A member of Henry VI’s household from a Lancashire family, Tunstall had been knighted by Henry in 1452. After his sojourn at Harlech, he headed north to fight alongside Henry Beaufort, Duke of Somerset at the battles of Hedgeley Moor and Hexham. After the defeats there, he found Henry and saw that he was secreted safely in Lancashire. Tunstall then returned to Harlech, perhaps recognising the importance of keeping a foothold on the Welsh coast.

The final demise of Harlech was caused by a failed Lancastrian invasion. In June 1468, Jasper Tudor landed at Barmouth a few miles south of Harlech. Edward IV had made known his intention to invade France and Louis XI’s response was to fund a Lancastrian invasion on Edward’s western flank. Jasper managed to capture Denbigh Castle, from where he held court in Henry VI’s name and launched raids further into Wales. This was enough to convince Edward to act decisively. Well, sort of. Edward planned to lead an army into Wales himself to crush the insurgency, only to delegate the task at the last moment to William Herbert. William took half the men he had raised around the mountains to attack Harlech from the north. His younger brother Richard Herbert was to approach from the south with the other half of the army, giving each brother around 4,500 men each. Richard encountered Jasper Tudor’s force south of Harlech and caused them to disperse and flee. When the brothers arrived at Harlech, a true siege began and did not take long to conclude.

With food running short and no sign of supplies from the seas, Dafydd ab Ifan ab Einion surrendered the castle on 14  August 1468. Sir Richard Tunstall was taken into custody amongst the fifty or so prisoners seised from the fortress. Although he was taken to the Tower, Edward IV pardoned him, only for Tunstall to join the readeption government was Henry VI’s chamberlain. Tunstall was attainted when Edward IV regained power and managed to obtain the reversal of this punishment within a couple of years. He went on to serve both Edward IV and Richard III, the latter inducting him into the Order of the Garter before Tunstall was reported in the Ballad of Bosworth Field as one of four English knights to immediately join Henry Tudor when he landed in Wales in 1485. For his final victory against this remnant of Lancastrian resistance, William Herbert was given Jasper Tudor’s forfeited earldom of Pembroke.

Today, Harlech Castle is a stunning monument to Edward I’s campaign to impose himself on Wales. The sea has retreated from its w”Men alls, but it looms over the vast, flat plains left behind and still dominates the coastline to the north and south. The famous song Men of Harlech is widely believed to refer to this prolonged resistance to Yorkist rule, becoming something more like a Welsh national call to arms than a description of a long-running siege as part of a fight between two English royal houses. The 1873 version by John Oxenford romantically describes:

‘Till the sound spreads wide around,

Your foes on every side assailing,

‘Till invaders learn with quailing,

A modern visitor can walk the long entrance ramp that has replaced the old, open, wooden staircase into the castle and stroll the grounds at will. The walls remain open, and a pretty challenging walk as the wind blows in from the seas. If you pause for a moment there, it is easy to imagine standing there in the cold and high wind, heavy armour serving to help root your feet, but threatening to help drag you down from the walls with one false step. There can have been little romantic in August 1468 as cannon thundered from the town into the walls and food began to run short. With no hope of relief, surrender to an implacable and unforgiving enemy can only have held terror for those Men of Harlech, that last bastion of Lancastrian loyalty in England or Wales.