THE MEDIEVAL CROWNS OF EDWARD THE CONFESSOR AND QUEEN EDITH 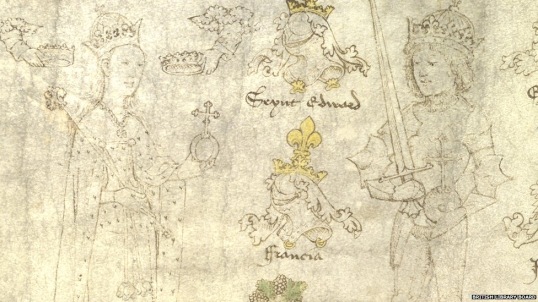 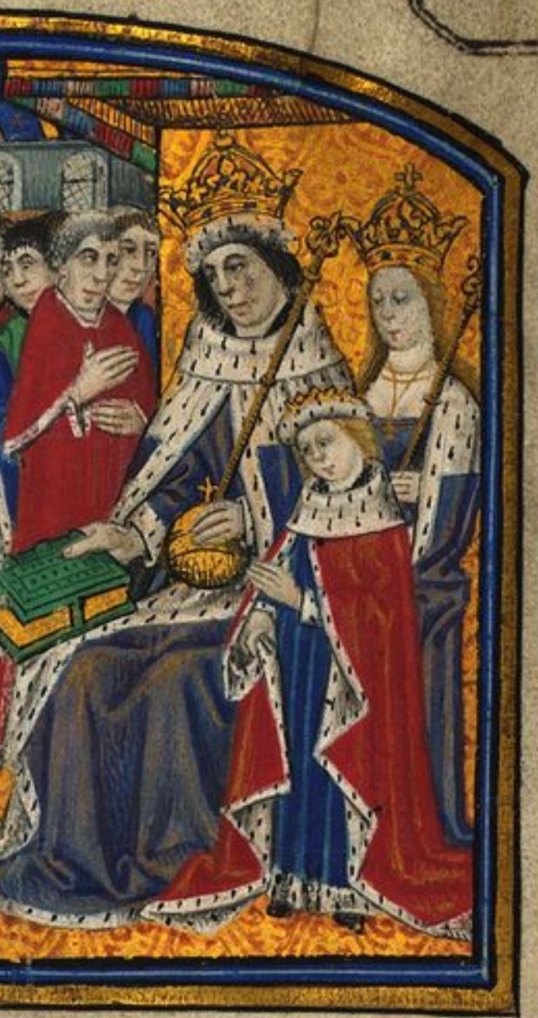 The first Coronation Crowns, known as the crowns of  Edward the Confessor  (also known as St Edward the Confessor)  and his wife  Queen Edith were probably made about the IIth century for the king’s coronation in his new completed rebuilt Church of St Peter, now known as Westminster Abbey on Thorney Island.   Edward was one of the last Anglo Saxon kings.  We know that Queen Edith’s crown was valued at £16 and was made of  ‘Siluer gilt Enriched with Garnetts foule pearle Saphires and some odd stones’.   Edward the Confessors crown was described as a ‘crowne of gould wyer worke sett with slight stones and two little bells’.   They were worn by every king and queen after that, excluding Edward V and Jane, who of course were never crowned,  until their destruction by the Parliamentarians.   Its hard to find an absolutely accurate depiction of them as various kings may have added bits and pieces over the centuries.   Having said that we have a  very good idea from the lovely drawings in  Rous roll,  the Beauchamp Pageant, and the Royal Window at Canterbury Cathedral. 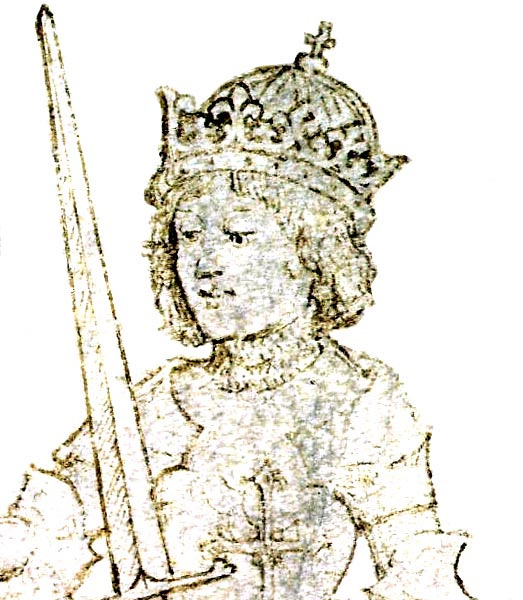 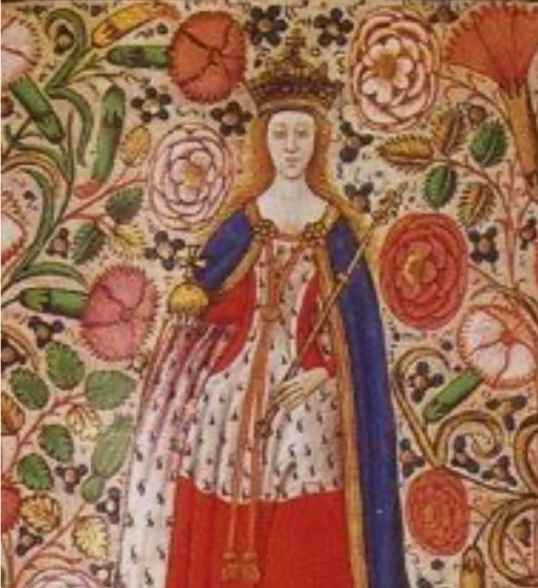 Elizabeth Wydeville in her coronation robes and Queen Edith’s crown. the Worshipful Company of Skinners 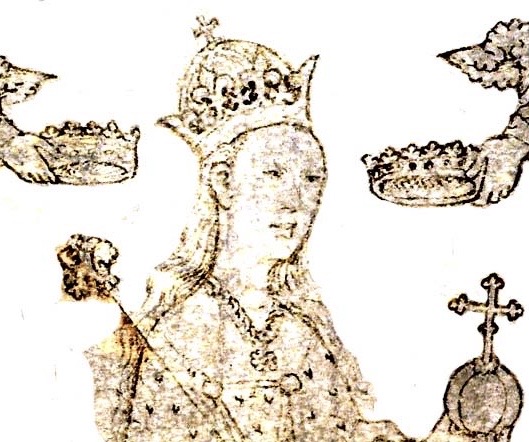 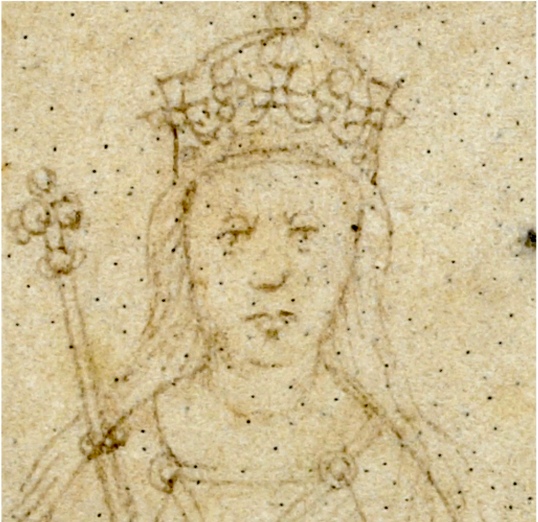 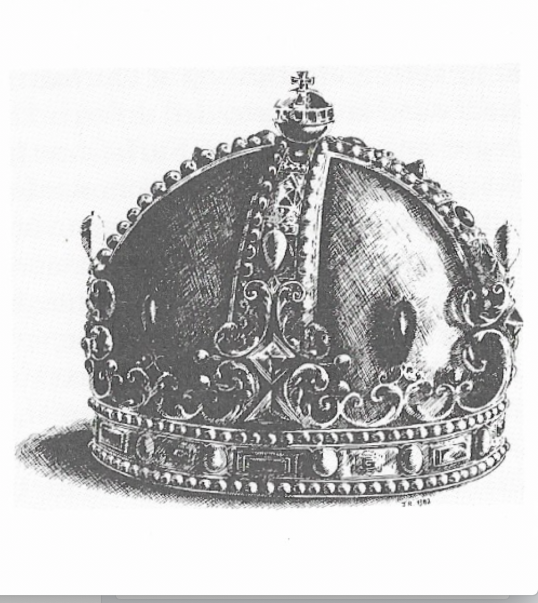 These wonderful crowns survived until the end of the English Civil War when the victorious Parliamentarians ordered all sacred symbols and relics of monarchy, now rendered redundant,  to be ‘totallie Broken and defaced’ and the metal to be used to make coins.

New crowns were made for Charles II‘s  coronation in 1661 by Robert Vyner including a new Coronation Crown.  This crown sometimes gets confused with the Imperial State Crown.  It should be remembered that the Coronation Crown is only used for coronation and thus does not get many outings.   The State crown is the one our present queen wears for the State Opening of Parliament.  Having been made comparatively recently in 1937 it has a most exquisite survivor from the Middle Ages…the Black Prince’s Ruby! Its not actually a. ruby but a large irregular cabochon red spinel.  The stone has an astonishing history which is hard to verify  and  I will go into here only briefly but suffice to say it did indeed belong to  Edward the Black Prince.  It then passed to Henry V who was said to have worn it on his helmet at Agincourt.  It was later said that it was worn by King Richard III in the crown that was lost at Bosworth and legend says was found under a hawthorn bush by William Stanley. 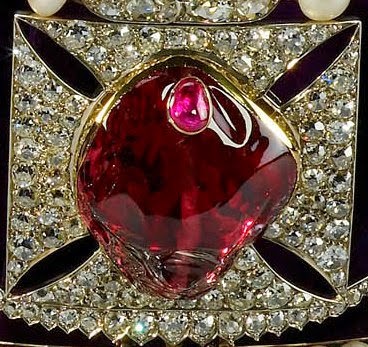 The red cabochon known as the Black Princes Ruby..a medieval survivor and now worn in the modern State Crown.

And so, besides the two royal crowns, much, much more was lost.  Described by Sir Roy Strong  as a ‘treasure trove of medieval goldsmith work’ there were  ‘Several ancient sceptres and staffs, two with doves on top and one with a fleur-de-lis of silver gilt and an ampulla which contained the holy oil for anointing listed as ‘A doue (actually an eagle) of gould set with stones and pearle’    There were ancient medieval royal robes worn by the king before the crowning….and an ‘old Combe of Horne’ probably of Anglo Saxon origin and used to comb the kings hair after the anointing listed as ‘worth nothing’ .  A total of nine items were sold to a Mr Humphrey for £5 in November 1649 (1).

I’ll leave the last word on this tragic part of  British history to Sir Edward Walker, Garter of Arms who wrote his report in 1660.

‘And because through the Rapine of the late vnhappy times, all the Royall Ornaments and Regalia heretofore preserved from age to age in the Treasury of the the Church of Westminster, were taken away, sold and destroyed the Committee mert divers times, not only to direct the remaking such Royal Ornaments and Regalia, but even to setle the form and fashion of each particular’ (2)

Did Richard III wear the Black Prince’s Ruby at Bosworth….?

I found the above sentence in a post on the British Medieval History Facebook group. How very intriguing. It’s something I had never heard before. Did Richard really wear the priceless but cursed gem at Bosworth? If so, was he (as one friend has suggested) emulating Henry V? Or even the Black Prince himself?

The ruby is actually “a magnificent 170-carat red spinel, the largest uncut spinel in the world. This particular precious stone, known as ‘the Great Imposter’, has a traceable history dating back seven centuries and is rumoured to be cursed, as its consecutive royal owners have been dogged by adversity, misfortune, tragedy or just downright bad luck.’

I learn every day, because not only had I never heard the Richard-at-Bosworth story, but I didn’t know the stone was also called the Great Imposter!

One thing is certain; the ruby certainly doesn’t always mean good luck for its owner, as can be seen at here, which provides a potted history of the ruby’s progress through the centuries. Thankfully, our present queen seems to be bearing up remarkably well in spite of the supposed curse.

It didn’t bring good fortune to the Black Prince, who suffered a truly miserable demise, as did Richard II. The usurper Henry IV didn’t enjoy good health or a happy, trouble-free reign. Henry V was doing brilliantly, until his health was destroyed at an early age. Henry VI…well, he was just the wrong man in the wrong place, and not at all suited to be king. Edward IV was also doing brilliantly, until he took the eye off the ball and allowed himself to go to seed, so to speak. He died young.

Then there is poor Richard, for whom true happiness was always to be elusive. He tried hard to do the right thing, but it’s like being a present-day driver. You can do everything by the book…it’s just the other idiots on the road! Can the ruby be blamed for the deaths of Queen Anne Neville and Richard’s only legitimate son? And for the betrayal and defeat he suffered at Bosworth?

And if the fatal gem then proceeded to Henry VII, it didn’t bring him a contented life either. Success as a king, maybe, but he was beset by foes and pretenders to his stolen throne, and I think personal happiness eluded him, especially after the death of his queen, Elizabeth of York. He died in his bed, but it was a miserable death.

The interest of this blog ends with Henry VII – well, it does for me. But the Black Prince’s Ruby has certainly brought mixed blessings to his successors.

Anyway, back to whether or not Richard could have worn it at Bosworth. Does anyone know of this story? Is it fact, or fiction? I hope someone can provide the answer.

All the Johns of St Stephen’s Chapel….

As a writer of medieval fiction, and therefore stuck with a preponderance of Johns, Edwards, Richards, Edmunds and so on, I’m only relieved not to have been asked to write a history of St Stephen’s Chapel. SO many Johns? Of the human variety, I hasten to add!

This article: Where did all the Johns come from? – An Oddity in the History of St Stephen’s Chapel is both interesting and amusing.