Archive for the tag “humour” 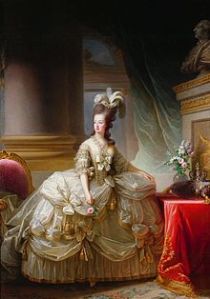 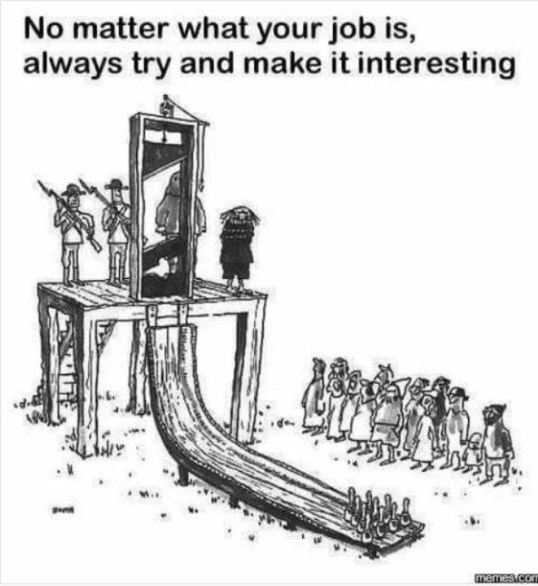 Well, even grisly notions can make me laugh….!

It could have been her, of course, or him. 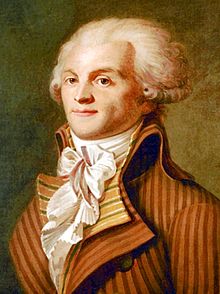 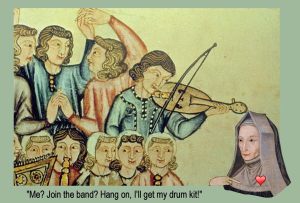 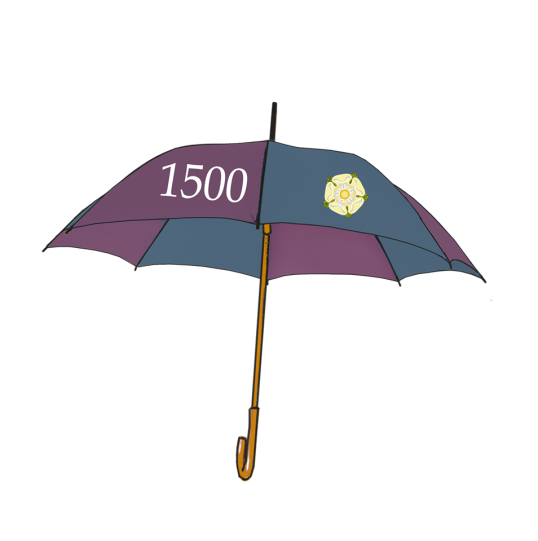 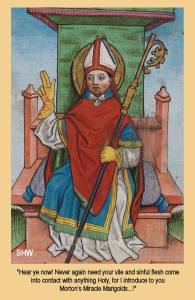 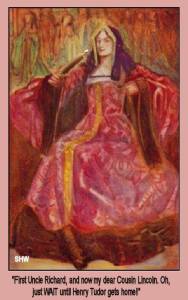 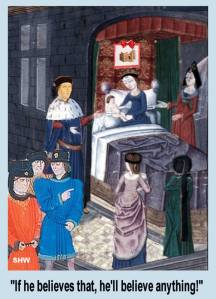 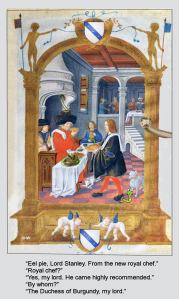 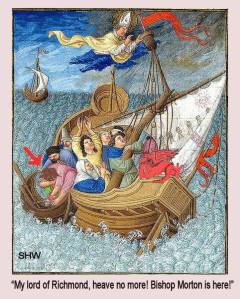 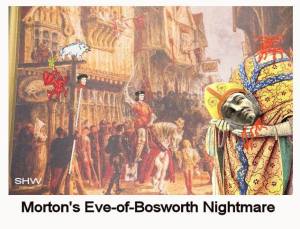 I Would Rather See the Hunting of a Duck…

Certain ‘books’ (ahem) often go on about Richard III’s supposed unpopularity and describe his brother Edward IV in glowing terms, putting him forth as a universally loved and admired monarch. (Even worse are those writers who make the brave, ruthless, warrior-King Edward into  some kind of hapless old duffer, totally cowed and pushed about by his little brother, and seemingly hardly aware of his supposedly ‘evil machinations.’)

However, I came across this reference to someone from 1461 who was DEFINITELY not best pleased at the crowning of the handsome young Edward. A certain London notary got in hot water with the authorities for saying in public,  ‘twutte and tourde for hym! I [would rather see] the hunting of a duck as him’ [KB 145/7/1]’

It  is an extraodinary statement, not only because he was insulting a new King who had just won a very bloody battle indeed, but for  his liberal  usage of the profanities ‘twutte’ and ‘tourde’. Other than the spellings, how very modern his outrage (and bad language) seems! 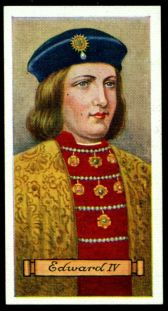 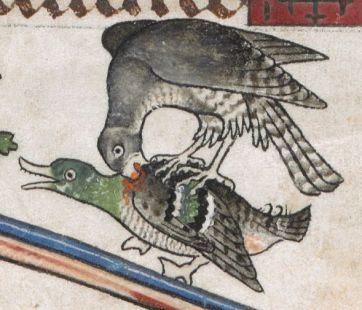 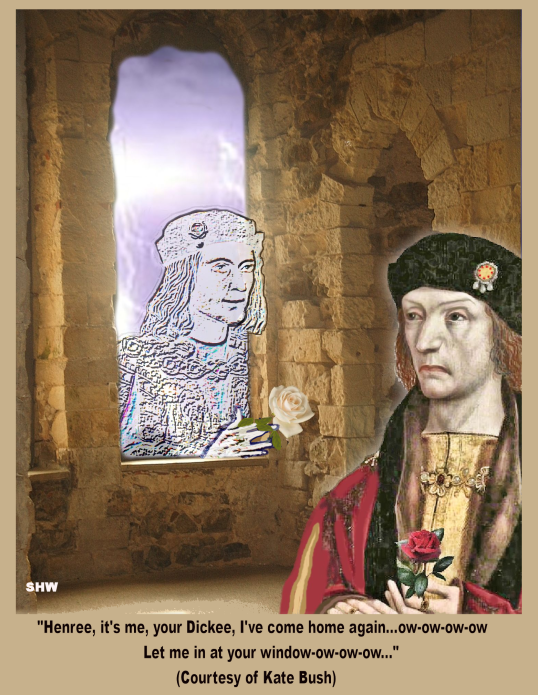 How Edward IV ascended the throne of England…. 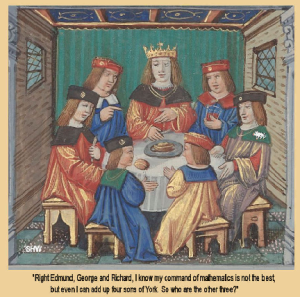 The Wars of the Roses did not commence, à la Bard, with white and red roses snatched and brandished in a garden by opposing lords, but they were foreshadowed at the turn of the fifteenth century when Henry of Bolingbroke, Duke of Lancaster, usurped and murdered Richard II.

But Gaunt had other children by other women, especially a nest of illegitimate Beauforts by his liaison with Katherine de Roët/Swynford, who had been governess to his children by Blanche. Gaunt wanted the Beauforts to be legitimized, and Richard II eventually agreed. Letters Patent were issued in 1397.

When Bolingbroke stole the throne and murdered Richard, he also made sure that his half-siblings, the Beauforts, could not succeed to the throne. He did this by adding a clause to the original Patent of legitimation. This was popularly regarded as valid, but maybe it was not, because the original patent had received parliamentary sanction. 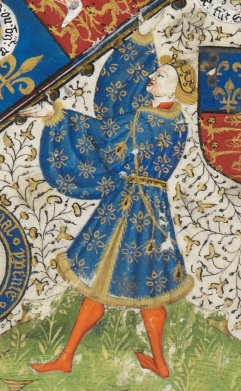 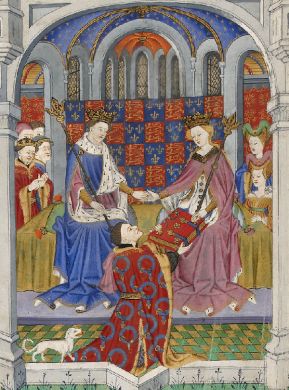 Henry VI and Margaret of Anjou

The Lancastrian line held power until the reign of Bolingbroke’s grandson, the weak, ineffectual Henry VI. At first childless, Henry had to decide on an heir. If the Beauforts were set aside, the next legitimate heir to the throne was Richard, 3rd Duke of York, who descended from Gaunt’s younger brother, Edmund of Langley, 1st Duke of York. But, York was also descended, through his Mortimer mother, from Lionel of Antwerp, Duke of Clarence, who was an older brother of Gaunt’s. Not the oldest, of course. That honour went to the Black Prince, father of Richard II.

Gaunt and the Lancastrians did their utmost to insist that rights to the throne could not descend through a female line. They were wrong. For instance, Henry II’s claim came through his mother, the Empress Matilda, whose opponent, Stephen, also claimed through his mother. So, the Lancastrians were good at dealing from the bottom of the pack. Gaunt himself laid claim to the throne of Castile in right of his second wife! And he had gained the incredibly wealthy and important dukedom of Lancaster through his first wife. But that was different, of course. Oh, of course. So, they were hypocrites.

This was the situation when Henry VI needed an heir. York felt, rightly, that he was the legitimate heir. He did not claim that the House of Lancaster had no right to the throne, only that he was the next heir. Then, miraculously (or by the divine intervention of the Beaufort Earl of Somerset) Henry VI’s queen provided the much-needed son. In the nick of time, eh? Poor Henry believed he was the father, but a lot of people saw hanky-panky at work…and Somerset’s Beaufort fruitfulness. 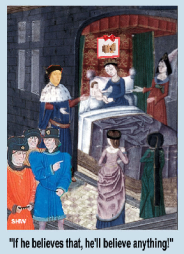 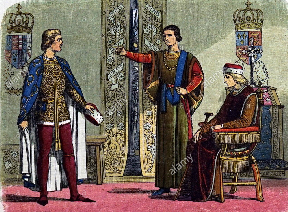 York’s claims went quiet again. But as the years passed, Henry’s queen, Margaret of Anjou, grew fearful that York’s designs on the crown would be at the expense of her son. She was aided and abetted in this by the powerful Duke of Somerset. York realized that he and his House were in danger of extinction, and chose to stand up for his rights.

Thus began the Wars of the Roses, a tussle that went on for decades and resulted in the crown going from Lancaster to York, and then back to Lancaster….if Henry Tudor can be described as a Lancastrian. He was descended through the Beauforts, who, according to Henry IV, could not succeed to the throne. But that is yet another story. So, too, is the fact that if the claim to the throne could descend through the female line, then Philippa, one of Gaunt’s daughters by Blanche of Lancaster, and thus full sister of Henry IV, had to be considered. She had married the King of Portugal, and had sons. Philippa’s younger sister, Elizabeth, had married the Duke of Exeter, but their line was not considered either. Besides, Philippa was the older sister, and her line not only legitimate, but secure. However, as far as I can ascertain, her claim does not appear to have been even vaguely considered.

By this time York was the father of four sons: Edward, Earl of March (Edward IV), Edmund, Earl of Rutland, George, Duke of Clarence, and Richard, Duke of Gloucester (Richard III). The first two were old enough to fight. Another of York’s great assets was the Earl of Warwick, who is now known to us as the “Kingmaker”.

With Margaret determined to protect her son’s rights, battles commenced, and fortunes swung. Then York and his second son, Edmund, were slain by treachery (the same fate as that suffered by the last of the sons, the brave Richard III) at the Battle of Wakefield. York and Edmund’s heads were displayed on the gate of York city. At least Richard III did not suffer that.

Now York’s eldest son, Edward, the new Duke of York, became the figurehead of the Yorkist cause. Bitterly angry about the fate of his father and brother, he took up the cudgels and, with Warwick at his side, triumphed over the Lancastrians to take the throne. He was proclaimed king on 4th March 1461. After a few years there was a hiccup, and he was forced to flee the country with his younger brother, George and Richard. Henry VI was reinstated. Edward returned, and after another bout of battles (and quarrelling with and alienating Warwick, to say nothing of having George switch sides more than once) Edward finally demolished Lancaster at the Battle of Tewkesbury on 4th May 1471. He gained victory with his brothers fighting at his side. Somerset was captured and beheaded. Margaret of Anjou’s son, the Prince of Wales, was also slain, and Margaret’s will finally broken. Days later, Henry VI, died in the Tower of “melancholy”. Hmm. Let’s just say that his survival would have been inconvenient to Edward, who wouldn’t want him returning to the throne again.

And so England had her first Yorkist king for the second time. If you see what I mean. The above is clearly somewhat condensed, and many of the finer points have had to be omitted, but it’s the gist of how handsome, dashing, charming Edward, Earl of March, became King Edward IV.

An anniversary with SHW

Today in 1484, Elizabeth Wydeville emerged from sanctuary in Westminster Abbey … 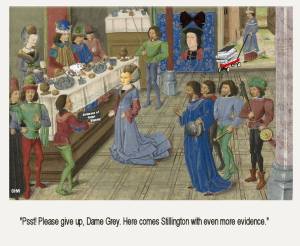 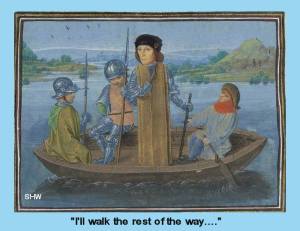 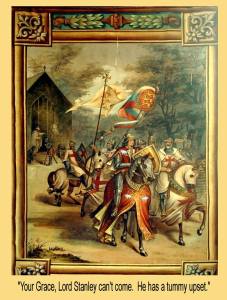 Did the producers recognise him?

Here is a picture you may well have seen.

It shows, from Carry On Henry, Kenneth Williams as Thomas Cromwell, Lord Privy Seal to Henry VIII and briefly Earl of Essex.

In fact, Cromwell’s sister married one Thomas (or Morgan) Williams, although their descendants took the Cromwell surname.