Archive for the tag “historical accuracy”

NOW WE HAVE ROBERT–WHY NOT RICHARD?

Netflix will soon be showing a new medieval series, ‘OUTLAW KING’, about Scotland’s Robert the BRUCE. While I have no idea how good the script is or how close the series will stay to the historical record, the costumes and hair styles seem more appropriate to the time than many recent offerings. It’s not overtly laughable, anyway.

However, once again, I am left wondering–why not a film or series about Richard? I truly thought one would spring  up  in the aftermath of his finding. No, we have just been inundated with more Shakespeare, both on TV and in the theatre. Yes, there was the TV series,  The White Queen, which at least gave us a more sympathetic and attractive  Richard (as well as one close in age to the real man) but it really wasn’t about him but about the women of the Wars of the Roses, particularly Elizabeth Woodville.

It is time a dramatic epic about Richard’s life was filmed, instead of yet more Shakespeare complete with grotesque prosthetic humps a la the recent Benedict Cumberbatch offerings. Last I heard, the movie/TV rights to Sharon Penman’s Sunne in Splendour were still available… 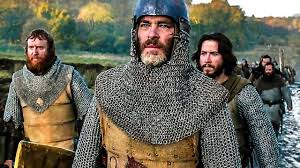