Archive for the tag “fleuur-de-lys”

Joan of Arc trained in Scotland….?

The above is taken from this lengthy and informative article about Joan of Arc. The Scots, of course, were always ready to help anyone who was opposed to the English, so I am quite prepared to believe they welcomed Joan in this way. She apparently “hand selected Scottish bodyguards from the Stuart, Kennedy and Hay Clans, [and] in 1429 [Joan] asked Hamish Power, (French name: Heuves Polnoir), a Scotsman living in Tours, France, to design her standard. and pennon.” More, “The Scots wore the Fleur-de-Lys on their left breast to show their allegiance to France.”

So I think we can take Scottish collaboration with the French as a done deal.

The article also deals a great deal with the Templars, superstition, the Church, roosters (national symbol of France) that still roam free, signs in the sky and so on. There is too much to comment on here, so better you read it all for yourselves. And draw your own conclusions. 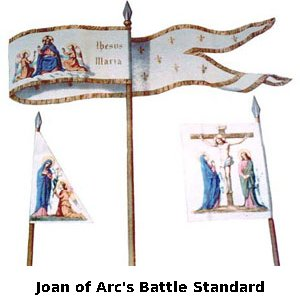