Archive for the tag “Events”

An interesting exhibition of medieval effigies and costume….

Courtesy of the Mortimer History Society:

Coming up in July …

… literally where it all began nearly five years ago, children can just turn up at the Visitor Centre and learn how archaeology happens.

There is an announcement in The Millstone community newspaper for Mississippi Mills and The Area, of a lecture on March 31st on whether or not Richard III was a villain. It sounds as if it will be interesting:
http://millstonenews.com/2017/03/almonte-lecture-on-bones-of-richard-iii-march-31.html

SPECTACLE OF LIGHT AT SUDELEY CASTLE

Richard wouldn’t recognise it…but Sudeley Castle in Gloucestershire, which he owned briefly and probably stayed at prior to the battle of  Tewkesbury,  is being lit up in spectacular fashion this December. Gardens, buildings, the ruined banqueting hall (most likely built by Richard) and the little chapel containing the tomb of Katherine Parr, are all included in the light up.

The event runs until December 23. Please check the times on the castle’s  page, as the event is not on every night.

A day out in Exeter

As always, it was a pleasure to sing with Ian Churchward, founding member of The Legendary Ten Seconds at the Picturehouse in Exeter – a wonderful, arty location that always provides a warm welcome.

We were joined by lovely staff from the Somerset & South West Scoliosis Association UK who brought balloons, cakes, sweets and donation pots. It was great to help raise awareness of the charity and perform Ian’s well written songs about Richard III. An author called Philip Photiou also brought along copies of his Wars of the Roses novel to sell at the event.

Rob Stroud on electric guitar and Lord Zarquon on keyboards created a powerful landscape to accompany the historical narratives. Their solos were magnificent.

We had a nice sized audience including the artist Georgie Harman who is contributing to the new artwork for the forthcoming Sunnes and Roses album by The Legendary Ten Seconds.

Ian introduced his songs with a background of the history and how he came to write it, giving a nice context to each piece.

A particular highlight was singing The Year of Three Kings with its catchy sing-along chorus. We sang it for a second time as part of an encore with a much more positive and audible response from the audience second time around, proving how catchy the songs are.

After a break from the band to focus on my acting ventures I was delighted to re-join this group of talented musicians for a gig at the Picturehouse, where it all began. Ian and I used to sing around 5 songs as part of a music evening consisting of different musicians. It was fantastic to perform a longer set this time with the whole band.

FELLOWSHIP OF THE WHITE BOAR

KING IN THE CAR PARK

HOW DO YOU REBURY A KING

THE GOLD IT FEELS SO COLD

THE COURT OF KING RICHARD III

THE YEAR OF THREE KINGS

No, don’t get excited – it’s the same old Shakespearean Richard…. 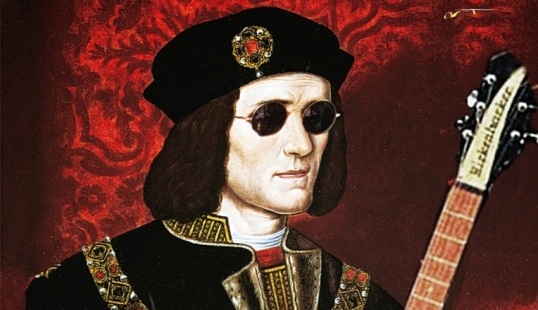 Unfortunately, Dr Bronwen Price is Principal Lecturer in English Literature at the University of Portsmouth, and a specialist in Shakespeare, so we cannot expect anything about the real Richard. Still, if the illustration is anything to go by, at least he keeps up with the times. He’s been portrayed in numerous periods and settings, so maybe this time he’s a rock star.