Archive for the tag “Eulogium”

How and why the House of York laid claim to the throne…. 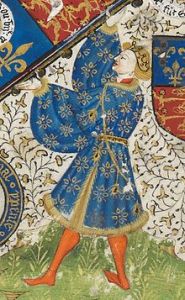 Here is an article from English Historical Review, 1st June 1998, telling of how and why Richard, 3rd Duke of York, laid claim to the throne of England. The root cause was an entail to the will of Edward III, who was admittedly in his dotage at the time. The entail, which excluded a female line from ascending the throne, spoils that otherwise excellent king’s legacy as far as I’m concerned. But then, I’m a modern woman who doesn’t hold with the denying of rights simply because the ones being denied are the female of the species! Or the denial of anyone’s true and honest rights, come to that. True and honest being the operative words.

The mastermind behind this entail was Edward’s 3rd son, John of Gaunt, Duke of Lancaster, who sought to eliminate any claim from the descendants of his 2nd eldest brother, Lionel. Those descendants were, of course, through the female line, which line happened to be the one from whom Richard, 3rd Duke of York, was descended. Gaunt’s purpose was to see that his own line took precedence. It did in the end, but not in a way old Edward III could have foreseen, and not through the entail. Instead it took the form of Gaunt’s son and heir usurping and murdering his first cousin and rightful king, Richard II, heir of the great Black Prince. Gaunt’s son took the throne and became Henry IV, the first Lancastrian monarch.

So it seems that gallant Gaunt leaned on his dying father to achieve his own ambitious ends. But that’s the House of Lancaster for you! And it was Gaunt’s double-dealing chicanery that eventually led to Richard, 3rd Duke of York, claiming the throne that was his by right. And it all led to what we know as the Wars of the Roses.

However, there just might be some doubt about the entail’s existence. According to Penny Lawne’s biography of Joan of Kent: “…In preparation for his [Edward III’s] death he drew up his will, one of the witnesses being Sir Richard Stury, and in an entail specifically designated Richard (II) as his successor…” There is no mention of excluding any female line, but then, Lawne is very pro-Gaunt throughout, so I suppose the nitty-gritty of such an entail was better omitted. Unless, of course, all the entail ever really did was designate Richard of Bordeaux as the old king’s successor. In which case, where did the story of Gaunt’s pressure and interference come from? Ah, well, later in her book, Lawne lays the blame at the feet of Walsingham, who “held Gaunt in particular contempt, convinced he wanted the throne for himself, and repeated virulent gossip and rumours current about the duke…” Walsingham, it seems, even went so far as to portray Gaunt trying to persuade the Commons to discuss the succession, and was so intent upon removing opposition that he requested a law be passed to forbid a woman from inheriting the throne, “which would obviate the claim of Lionel’s daughter Philippa, who arguably held the most legitimate claim to the throne after the prince’s son”. So, this business of excluding females’ claims was due to Gaunt browbeating the Commons, not to Edward III’s entail?

Well, not being a fan of John of Gaunt, I am quite prepared to believe he put the screws on his dying father, in order to ensure the House of Lancaster becoming heir to Richard II’s throne, in the event of Richard childless demise. But I can also believe he’d go to work on Parliament. Gaunt was ruthless when it came to furthering his own family, and how better to achieve this than paving the path to the throne? Either way, he tried to see the succession go to the House of Lancaster.

Richard, 3rd Duke of York, quite rightly, did not think the House of Lancaster had any business wearing the crown. He was descended from Lionel, Duke of Clarence, and truly believed his (senior) line had precedence. I believe so too. Maybe it was through the female line, but it was perfectly legitimate, and until the demise of Edward III and that pesky entail (or Gaunt’s other forceful activities), there had not been a bar on women taking the throne. Yes, they had to stand back while their brothers took precedence, but if those brothers died, then they themselves had every right to be crowned. Lionel of Clarence only had one child, a daughter. His right passed to her, not to his conniving next brother, Gaunt.

Richard of York WAS the rightful king.

Now, of course, it has all been changed, and women can take precedence even if they have a younger brother(s). The line goes through age, not gender. And about time too!