Archive for the tag “Earls of March”

The White Rose Of Mortimer?

Most historians now accept that, while the white rose of York was a heraldic badge used by the house of York during the Wars of the Roses, the origins of the red rose of Lancaster can only be traced back to Henry VII.1 After his accession to the throne in 1485 and marriage to Elizabeth of York he effectively invented it when he created the bi-coloured red and white Tudor rose, which symbolised the union of the houses of Lancaster and York. But what about the origins of the white rose of York?

It is hard to over estimate the influence their Mortimer ancestry had on the Yorkists and their claim to the English throne. The Mortimers were descended from Lionel, duke of Clarence, the second surviving son of king Edward III, whereas the Lancastrian kings of England were descended from his third…

Was Richard of Conisburgh illegitimate? 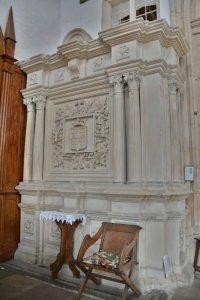 The Tomb of Edward, 2nd Duke of York

A puzzle from the reign of the Richard before ours… 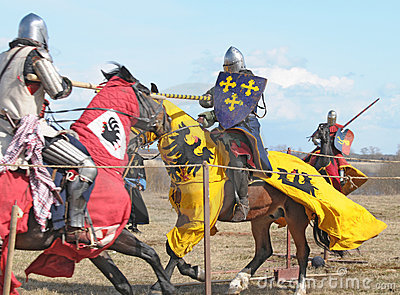 Here is a writer’s dilemma, concerning an incident from the reign of Richard II. So, not our Richard, but the one before him.

At Christmas 1389, which the court celebrated at Woodstock, there was a tournament. Or at least, jousting. One of those taking part was 17-year-old John Hastings, 3rd Earl of Pembroke. He was very popular, and was married to Philippa Mortimer, sister of Roger Mortimer, 4th Earl of March. She was just a month past her fourteenth birthday.

Tragedy ruined those Christmas festivities when John Hastings was killed by an opponent’s lance that slipped and pierced his groin. It was a horrible way to die, and the shocked court mourned his loss. How Philippa felt we will never know.

Right, all is clear so far, but what is not so clear is the name of the man who wielded that fateful lance. He has been identified as Sir John Des . . . but also as Sir John St John of Paulerspury, Northamptonshire and Fonmon, Glamorgan. Which one was it?

And this is Sir John Des: https://faculty.nipissingu.ca/muhlberger/…/texts/histvit.htm

There are other links, of course, but I have only given one for each man. And it has to be said that Sir John St John seems to have had a pardon for the crime, but that still leaves the mysterious Sir John Des, of whose existence I have found nothing at all, except in connection with the Earl of Pembroke’s demise. That is, of course, on the understanding that Des was a stand-alone name, and wasn’t just a part of one, e.g. Sir John des Barres. Does anyone know anything about him?

And is there an absolutely incontrovertible source that proves, once and for all, which of the two gentleman it was? My instinct is with Sir John St John, but . . . .

Like Loading...
Posted by viscountessw in Uncategorized and tagged Earl of Pembroke, Earls of March, jousting, Richard II

A sword made for Richard’s son….?

The following is taken from an item in one of the Mortimer History Society newsletters. It was by a member, Stefan Zachary, and concerns a sword of state in the British Museum. 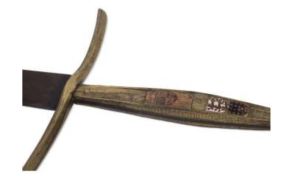 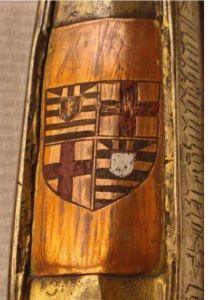 Mortimer Heraldry on a Sword of State

This sword is dated c1460-70 and it is said to be a ceremonial sword of the Prince of Wales. On one side of the hilt is the English Royal coat of arms and also those of Wales, Cornwall and St George. On the other side are the arms of Mortimer quartered with de Burgh. This quartering was first used by Roger Mortimer, 4th Earl of March (d1398) as his mother was Philippa de Burgh, Countess of Ulster.

The title ‘Prince of Wales’ was first used by an English monarch by Edward I, who gave it to his son and heir, the future Edward II. So, given the age of the sword, it is possible that it was made for Edward, Lancastrian son and heir of Henry VI. Or, that the Yorkist Edward IV gave this sword of state to his son Edward (later Edward V) in 1470. In 1472 King Edward IV set up a council to advise and assist his young son in performing his duties and this council blossomed into the Council of Wales and the Marches, based in Ludlow, that survived until 1689.

The other possible recipient of this fine sword was yet another Edward, the son of Richard III, created Prince of Wales in 1483. Only he and Edward V, among these heirs, were of Mortimer descent.

Like Loading...
Posted by viscountessw in Uncategorized and tagged Council of Wales and the Marches, Earls of March, Edward I, Edward II, Edward of Lancaster, Edward of Middleham, Edward V, Henry VI, Ludlow, Mortimer History Society, Princes of Wales, swords | Leave a comment

Another little boy who went into the Tower and never came out. (As far as we know.)

After the fall of Harlech Castle in February 1409, various members of Owain Glyndwr’s family were taken to the Tower. Among them was his grandson, Lionel ap Edmund (or Lionel Mortimer) the young son of Sir Edmund Mortimer and his wife Catrin ferch Owain. This boy cannot have been older than six at the uttermost, and may well have been considerably younger, perhaps even a babe in arms.

Lionel was (theoretically) heir to the earldom of March after the young Earl of March and his brother, and thus very close in blood to the Mortimer claim to the English throne. In addition, he was descended from all the principal Welsh princely houses, including that of Gwynedd. (Ironically through his father, who descended from Gwladys Ddu, daughter of Llywelyn ap Iorwerth.)

In 1413, Catrin Mortimer and two of her daughters were buried in St. Swithin’s Church in London. The fact the three of them were buried together suggests death by contagion of some kind, although this is only a probability. However, what happened to Lionel and his remaining sister is unknown. Apparently they went into the Tower and never emerged.

Nevertheless, as far as I know, no one has ever accused Henry IV or Henry V of murdering them.

Catrin’s mother apparently outlived her, but we don’t know what happened to her either. The Tower has many secrets, but some of them appear to provoke very little curiosity.