The ghosts and urban legends of Scarborough….

To the best of my knowledge I’ve never seen a ghost, although when I was six/seven and living near Castle Archdale on the shores of Lough Erne in County Fermanagh, our landlady’s dog, named Master Dash, sat on the steps outside the great house (no longer there) and howled. He was a soft old dog, would do anything, go anywhere, never turned nasty…but he would not go inside. He stayed there on the steps howling until we left again. My father told me the dog had probably seen the Grey/White Lady, who was known to haunt the place. That’s all I have to offer in the way of ghostly experiences, and I don’t know to this day whether Master Dash simply didn’t want to go inside, just go home for his dinner!

Anyway, this article concerns the fifteen or so  ghosts or urban legends associated with Scarborough. Number 4 on the list is King Richard III’s House, of which it says: “….The apparition of a woman has been seen several times over the years at the King Richard III house – now a restaurant – which has stood on Scarborough’s South Bay for centuries….”

Well, I don’t doubt that I could go there every day for a year and the spectral woman wouldn’t appear to me. Master Dash would know, of course, but then he’s a ghostly dog now, so I probably wouldn’t hear him howling either! 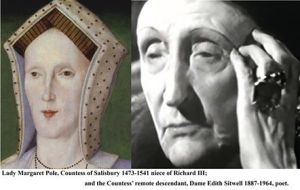 I have recently come across this photo, showing a similarity between Margaret Countess of Salisbury and her descendant, Dame Edith Sitwell, of the Renishaw literary family of baronets.

The Sitwell’s ancestry is through the early Dukes of Beaufort – the family who are theoretically descended in the male line from Edward III, but not necessarily. The first Duke, as you can see, married the daughter of Arthur Capell Baron Hadham, giving his descendants a connection to Anne of Exeter as well as her niece.