Archive for the tag “Charterhouse Square”

THE CROSSRAIL RAILWAY PROJECT – A PORTAL INTO OLD LONDON

No doubt archaeologists thought all their Christmases had arrived at once when first they heard the breaking news of the building of Crossrail, Europe’s largest infrastructure  –  which will be called the Elizabeth line and will open in phases from late 2018 – and the exceptional opportunities the excavations would bring.  However, did they ever imagine in their wildest dreams the wealth of artifacts that would be unearthed ranging from bison bones, 68000 years old, found at Royal Oak near Paddington, through the medieval period to Roman finds including a burial site beneath the area that once covered Liverpool Street Station.  Since the work begun in 2009 archaeologists have unearthed ‘tens of thousands of items’ from 40 sites spanning 55 millions years of London’s history and prehistory (1).The new railway will run from east to west through some of London’s most historical areas.  It has been described as a ‘layer cake of history hidden below the city’s streets’.

Some of the most interesting finds were discovered beneath Liverpool Street Station which stands right in the heart of what was once medieval London.  Of particular interest was the south-east corner where the ticket office once stood for this had been built over the Bedlam burial grounds (later known as Bethlehem Hospital) which had been in use since 1247 to 1815.  Eighty archaeologists worked on the site retrieving thousands of objects.  A total of 4,000 burials was uncovered including a plague pit containing 30 victims from the Great Plague of 1665.

One of the most poignant finds, a necklace that was found on the skeleton of a baby (modern re-stringing).  The beads are amber, white amber, cornelian, glass and bone. 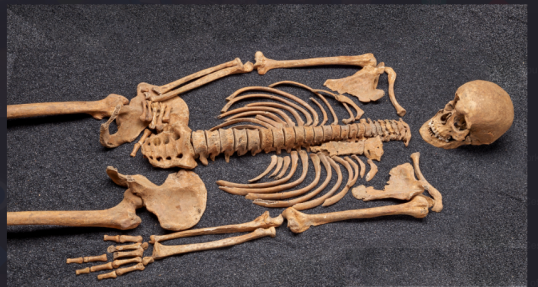 Grave Marker for Mary Godfree, a victim of the Great Plague who died 2 September 1665.

A large ditch was excavated to the south of Charterhouse Square.  It may be the remains of Faggeswell Brook which flowed into the Fleet River, the ditch formed the southern boundary of the cemetery and Charterhouse Monastery, founded in 1371 and suppressed in 1538.  Included in the items found, which had been dumped in the ditch to fill it in between 1580 and 1640 were leather shoes, parts of a horse harness dating back to the late 1500s , pottery and floor tiles dated to 1300 probably from the monastery.  The remains of a cemetery were discovered containing the remains of victims of the Black Death dating from 1348/9.  Twenty-five skeletons were discovered buried in three layers.

Worcester House, a 15th century moated manor house built about 1450 probably on the site of an earlier house was previously known as King John’s Palace. Rubbish thrown into the moat gives an insight into the lives of those who lived there.  Among the many artifacts found were leather shoes, the remains of a horse harness dating from the late 1500s, dress pins, and a wooden ball which was probably used as a ‘jack’ in a game of bowls or skittles.  Henry Vlll is known to have loved bowls but banned poor people from playing it. 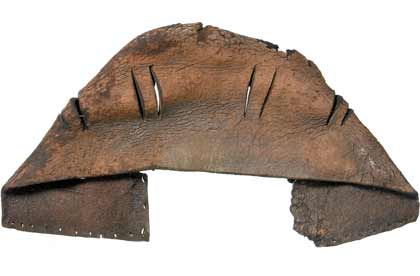 However, this is not the end of the story for this old Manor House, for when the archeologists had finished over 4 tonnes of bricks were donated to English Heritage for restoring England’s Tudor buildings.

I have merely touched here upon a few of the wealth of wonderful finds from the Crossrail Archaeology.  Anyone wishing to delve deeper can find some excellent links to informative websites such as this.