Archive for the tag “Catherine Pole”

Keeping it in the family

You will have seen him if you have been to Richard III’s final resting place. There are eight small statues on the main entrance (the Vaughan Porch, left) of St. Martin’s Cathedral but only one of them is wearing a doublet and hose, showing him to have lived a century later than the others. This is Lord Henry Hastings, as he was during his education alongside Edward VI and participation, with Northumberland’s daughter Lady Catherine Dudley in the triple marriage of May 1553. He was still Lord Henry as he served in the household of his great-uncle Reginald Cardinal Pole, travelling to Calais and Flanders and escorting Phillip II to England for his marriage to Mary I, whose succession had been aided by Lord Henry’s father, Francis, despite the family’s overt Protestant beliefs

In 1562, two years after succeeding to the Earldom of Huntingdon, he was considered by some for the throne had Elizabeth I not recovered from a bout of smallpox. By 1576, on the death of his mother Catherine (nee’ Pole) he was the senior post-Plantagenet, barred from the succession maternally only by the Clarence attainder but he had a junior claim through his grandmother Anne Stafford, w

hose father and brother both had their attainders posthumously reversed.

From 1572 to his death in 1595, Huntingdon was Lord President of the Council of the North, a position previously held by Richard as Duke of Gloucester and then by the Earl of Lincoln, in which he ruled the part of England north of the Trent from the King’s Manor (above), formerly home to the Abbot of York. During this tenure, he re-established royal authority in the region after the Northern Earls’ Rebellion failed, attended Mary Stuart’s trial, ensured good relations with James VI and his regents, the Earl of Morton in particular, also helping to prepare defences against the Armada. For his long service for more than half the reign of the last “Tudor”, Huntingdon deserves to be remembered alongside Lord Burleigh and his brother-in-law the Earl of Leicester, although his Calvinist beliefs set him apart from them and their Queen. During his time, in 1586, the recusant Margaret Clitherow was pressed to death at York.

As Claire Cross points out in her iconic biography The Puritan Earl, Huntingdon took his role as head of the family seriously. We can read how his assets shrank during his lifetime and how his 42 year marriage was childless, such that his brother Sir George succeeded him as Earl, with senior descendants still alive in Australia, as Jones has shown. He died eleven days before Christmas 1595 and was connected to all four later “Tudor” monarchs but his strongest connection was to Elizabeth I. Just like her, he had been imprisoned at the outset of Mary I’s reign, probably because he was Northumberland’s son-in-law, although his father’s loyalty soon extricated him from this.

“Who do you thin

k you are?” has returned and the third episode of the new series (20 July) featured Clare Balding. After last year’s programmes , this one and this other recent one, it is no surprise that tracing this racing presenter’s royal ancestry is a little easier.

Clare’s great-grandmother was Lady Victoria (hence the middle name) Stanley, who married, secondly, Sir Malcolm Bullock. This links her to the Earls of Derby, the first of whom was that Thomas, Lord Stanley who liked watching battles, although they were not broadcast live in his time. In particular, the 17th Earl married Lady Alice Montagu, who shared “Tudor” descent such that Ferdinando (5th Earl, 1559-94) was regarded as a hypothetical Catholic claimant after Mary of Scotland’s execution. Unsurprisingly, the Derby, one of the events she has often presented, was named for an ancestor (the 12th Earl, above right 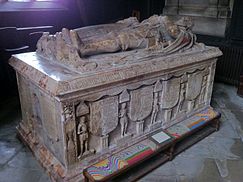 Additionally, her uncle is William Hastings-Bass, the 17th Earl of Huntingdon and once the Queen’s trainer, connecting her to the marriage between Francis (2nd Earl, tomb in Ashby de la Zouch to the left) and Catherine Pole, thus to George, Duke of Clarence and Edward III.

I would rather have heard the Huntingdon line mentioned than so much about her Dutch-American forebears at the end. 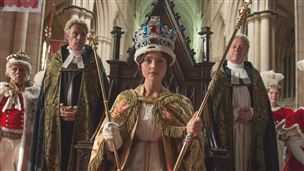 It is more interesting to watch a drama about a much later monarch when one is better informed than before. Lady Flora Rawdon-Hastings, the lady in waiting who appeared to be pregnant but was suffering from a cancer that proved terminal after a few months, was the sister of the 2nd Marquess of Hastings and 7th Earl of Loudoun, the senior descendant of George Duke of Clarence via Catherine Pole’s marriage to Francis Baron Hastings:
https://en.wikipedia.org/wiki/Earl_of_Loudoun
https://en.wikipedia.org/wiki/Alternative_successions_of_the_English_crown

Jenna Coleman, who plays the young Queen, has been photographed with Prince Henry and some newspapers are speculating about them. An addled historian in Hampshire has suggested that any relationship would have amounted to incest, even though her character died at least eighty years before he was born,even if she obtained a dispensation before filming began.

The programme, by the way, is rather good so far.

Yes, that Henry Pole. A contact asked us recently whether his mother (nee’ Jane Neville) had been arrested in November 1538 and executed with her husband (Henry Lord Montagu) and others that December or January. Online sources are confused about this. However, we do know that she was the daughter of George Baron Bergavenny and was born at about the same time as Montagu (1492), because Henry the Younger was probably under sixteen in 1542 and was not openly executed for this reason.

Pierce’s Margaret of Salisbury biography confirms that Jane’s death preceded the plot and possably pressaged Montagu’s participation in it, although her brother Sir Edward Neville was among those arrested and executed. The CP, citing the Letters and Papers of Henry VIII, confirms Jane’s death by 26 October 1538 and Sir Edward’s subsequent execution.

The ODNB states that Henry the Younger, together with his exiled and yet to be ordained uncle Reginald, was being considered by the plotters as a husband for Princess Mary. This may explain why he too was arrested and disappeared, yet his married elder sisters (Catherine and Winifred) were not.

Incidentally, Jane Neville was also descended from Constance of York.

1) He created two peeresses in their own right – Margaret Pole as Countess of Salisbury and Anne Boleyn as Marquess of Pembroke (see point 2).
2) He gave noblewomen, such as the above, Lady Margaret (Stafford) Bulmer, Catherine Howard and Viscountess Rochford, an equal opportunity to be executed.
3) He gave women, such as Anne Askew, an equal opportunity to be tortured.
4) Having left only one male heir, not fated to survive him for long, all realistic claimants by 1553 were female thus England had a Queen Regnant.