Archive for the tag “Bartholomew Gosnold”

Below is William Halsall’s 1882 portrait of the Mayflower in Plymouth Harbor. It is obviously imagined as the original ship was almost certainly broken up at Rotherhithe in 1624, a more extreme case than 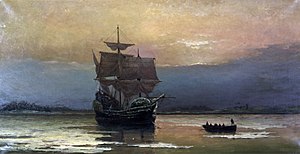 the “Streatham portrait“, which post-dates it’s purported subject’s death by about forty years. From the spelling of the title, the background is evidently Plymouth Colony in Massachusetts, not Drake’s Devonian city. Halsall, who was originally from Kirkdale in Liverpool, spent most of his working life in Boston.

The Mayflower and the Speedwell met at Southampton in July 1620 as a reaction to the religious situation in England. For the two hundred or so Puritans that travelled on this journey, life was easier in many ways under James VI/ I than it had

been during the previous century – they were no longer significantly persecu.ted, although many were financially marginalised. Within thirty years, the next generation of Puritans were to rule Britain with James’ son executed and his grandson displaced, but the Leiden Communion of refugees that left Delftshaven on the Speedwell under Captain Reynolds four hundred years ago today were as unhappy with their place in society as were Christopher Jones’ crew on the Mayflower. Jones appears to have been a Harwich man of about fifty, as this Harwich Society plaque implies (right), although Coggeshall also claims him, having been master and part-owner of the Mayflower for eleven years. The dissenter William Bradford, author of the History of Plymouth Plantation, was one of his passengers

Jones sailed from Rotherhithe to Southampton in mid-July to meet Reynolds’ crew, both ships carrying a number of animals. The Speedwell had sprung a leak crossing the North Sea and needed repair so the ships finally set sail on 5 August and finally sighted land – Cape Cod as it now known – on 9 November. Eighteen days later, being unable to settle in Virginia, some of the party sailed in search of a permanent base. Thus began the permanent settlement of European people in North America, following the attempts of Bartholomew Gosnold.

Another house for sale 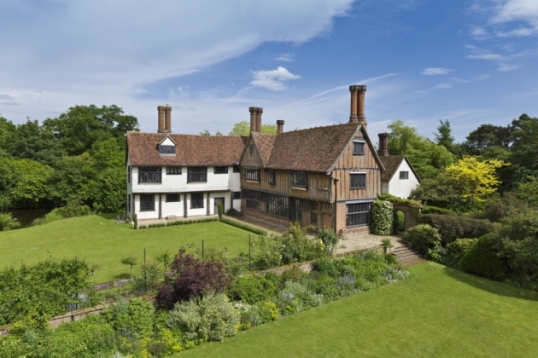 Well, here is your chance. Otley Hall, the childhood home of Bartholomew Gosnold, is now for sale and will hopefully be open more frequently. It was also featured here.

As it turned out …

Last week, just hours before the actor Danny Dyer appeared on “Who do you think you are?” to reveal his descent from Thomas Cromwell and Edward III – in the latter case, via the Mortimer, Percy, Seymour (Jane’s sister), Cromwell (Thomas’ grandson Henry), Tollemache (of Helmingham hall) and Gosnold (Robert Gosnold V, 1611-58) of Otley Hall) lines – we blogged about it. It was rather a good episode, reminiscent of Frank Gardner’s episode, revealing Robert Gosnold’s service as a Cavalier officer, as well as Thomas Cromwell’s end much like Michael Stanhope’s.

There is, however, almost a second line of Royal descent.

John Gosnold (1528-1628 and a cousin of Bartholomew) was married to Winifred Windsor, the great-great-granddaughter of George, Duke of Clarence. They had five sons and three daughters. One of their sons was called Robert but Robert V was actually John’s great-nephew as Lucie Field’s tree suggests.

It was worth a try.

For more on Thomas Cromwell, son of a Putney brewer and secretary to Wolsey, including his impact on Ipswich and other locations, .try this excellent MacCullough documentary.

As we established last year, Bartholomew Gosnold’s cousin was married to one of Clarence’s great-great-granddaughters (https://murreyandblue.wordpress.com/2014/06/01/the-explorer-and-the-clarence-descendant/).

Now we can identify four of the 1607 founders who died in Jamestown during 1610: http://www.dailymail.co.uk/wires/reuters/article-3177841/Scientists-identify-men-died-Virginias-Jamestown-400-years-ago.html. We can identify them as Rev. Robert Hunt, Sir Ferdinando Wainman, Captains William West and Gabriel Archer. The latter was, intriguingly, buried with some Catholic symbols. 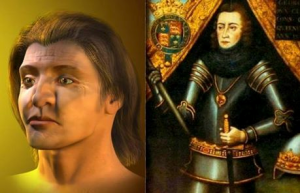 Thankyou to those who read our post “The explorer and the Clarence descendent”. We now know that, just like Richard III himself, there is a facial reconstruction of Bartholomew Gosnold.