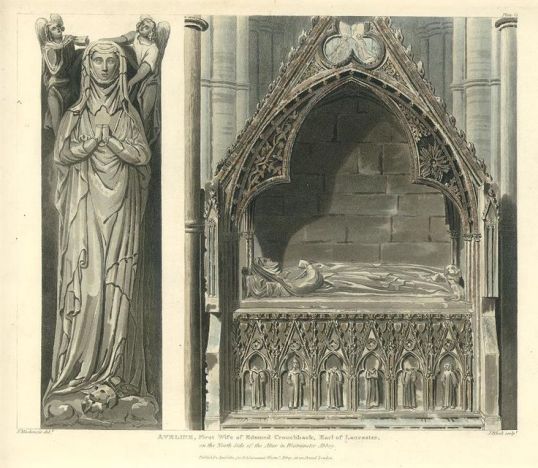 Aveline de Forz tomb and effgy.  One of the earliest tombs in Westminster Abbey.

On this day, 10 November, 1274, died Aveline de Forz, Countess of Lancaster and Edmund ‘Crouchback’ Plantagenet’s first wife.  Aveline was the daughter of William de Forz , count of Albermarle, Lord of Holderness and Isabella de Fortibus, Countess of Devon.  and having been born on 20 January 1259, at Burstwick in Holderness was 10 years old when she married Edmund, famously nicknamed Crouchback in Westminster Abbey.  Initially, in 1268 Edmund had been granted royal permission to marry Aveline’s widowed mother, Isabella, a very rich lady,  after the death of her husband William de Forz but the following year he married the young Aveline instead (1).  Theirs was the first recorded marriage in Henry lll’s new Gothic abbey shortly after the translation of the relics of the Confessor and on her death, only five years later, she was buried there in the Sacrarium on the north side of the altar (2). Her tomb was amongst the first of many in the Abbey and her heavily worn effigy on top depicts a rather maturer lady than Aveline actually was.    However it is still very beautiful and was drawn by Stothard in the 18th century when it still retained some of its original decoration and colouring.  It had once been richly gessoed and heavily gilded and   Stothard recorded the mantle green, the surcoat red with purple lining and the kirtle blue.  He also drew Edmund’s tomb and effigy. 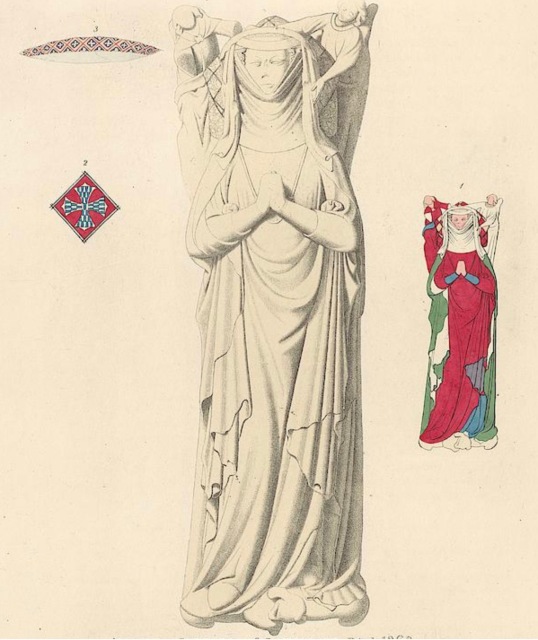 It has been speculated that Aveline may have died in childbirth but I have been unable to verify this and there were certainly many other causes that could have carried her off.  Its interesting that her five sibings all died young and all before Aveline herself.

On his death in June 1295 Edmund was first buried in the Minories also known as the Abbey of the Minoresses of St Clare without Aldgate,  which he had founded jointly with his second wife Blanche of Navarre.  Four years after his death he was reburied in Westminster close to Aveline (although his heart remained at the Minories) their tombs being separated by that of Aymer de Valence.  His Second wife Blanche was buried elsewhere so perhaps he had requested to be buried close to Aveline.

Another view of Crouchback’s effigy as drawn by Stothard 18th century. 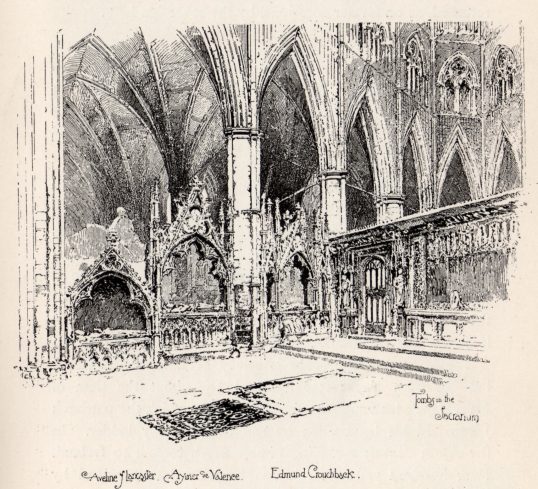 The tombs of Aveline, Aymer de Valence and Edmund.  A  drawing by Herbert Railton 1910 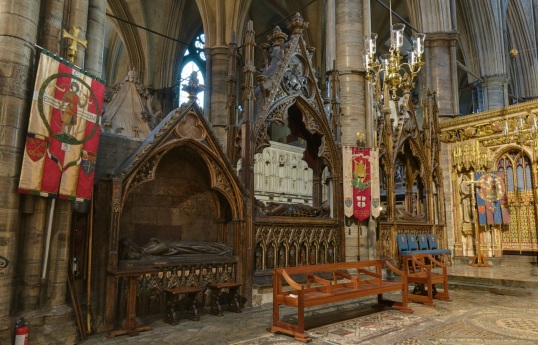 Aveline died in Stockwell, which is now a busy South London suburb and I presume her death took place in the medieval Manor House,  which once stood to the east of Stockwell Road, and facing the north of Stockwell Green, the green disappearing a long time ago.  No traces of this manor house, the gardens and orchards of which were contained in about  4 acres ,  have survived, and the area is now covered by a housing estate, garages and wheelie bins  but traces still linger in the name of nearby Moat Place.  Remains of this moat, alleged to have been 40-50 foot wide could still be seen as late as  19th century (3)    .