Archive for the tag “Athelstan”

Sleep in Henry VIII’s bedroom? But not his bed….!

The picturesque little Gloucestershire town of Thornbury is not in the Cotswolds, but down in the Vale of the River Severn, between Bristol and Gloucester. Caught between the Cotswold escarpment and the Severn estuary, it is an area of rich farmland, with orchards for cider and perry, and pasture for the production of cheese.

Everyone knows about nearby Berkeley Castle, with its grisly tales of red hot pokers, and perhaps a lot of people know there was once a castle at Gloucester, to guard the first bridge over the tidal river. Not so many will know that there is also a Thornbury Castle, or that it is now a luxury hotel.

You drive down through Thornbury’s beautiful High Street and into Castle Street, toward the originally Norman church of St Mary at the bottom. And there, behind the church, is the castle and its magnificent grounds. 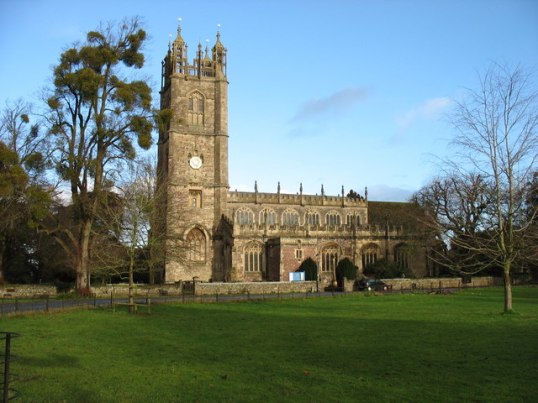 Actually, Thornbury was not always a castle, for it started as a manor house, where Richard II, stayed there on this day, 26th August 1386. There the king met the Cornish writer John Trevisa, who was working on his Polychronicon and the state of the royal prerogative. Richard was to request him to write a history of English kings, from Brutus to his, Richard’s, reign.

Henry VII very graciously gave Thornbury to his uncle, Jasper Tudor, whom he elevated to become Duke of Bedford. Jasper died there on 21st December, 1495. In his bed, at the age of 60-something. Not, as Wikipedia would have it, in 1521, beheaded for alleged treason by his “distant cousin” Henry VIII. Henry appropriated Thornbury and spent part of his “honeymoon” there with his new queen, Anne Boleyn. We all know the honeymoon period was soon over!

The nobleman who died in 1521 was Edward Stafford, the 3rd Duke of Buckingham, and yes, he was executed for treason. He was the son of Henry Stafford, the second duke, whom Richard III rightly called “the most untrue creature living”. Rebellion against Richard resulted in the second duke’s execution in Salisbury in 1483. So his son hated the House of York, and supported the Tudors. Much good it did him, for they hacked his head off anyway.

So you will see that Thornbury has had its share of royal visitors. No doubt there have been more, but I only give a flavour of the history that attaches to this beautiful house. Yes, it is now a castle, having been rebuilt by the above-mentioned Edward Stafford. It was sold in 2017, and so must now be under new management.

A stay there would be a delightful experience, I’m sure, but a word of warning. Jasper Tudor’s ghost is said to wander around of a night…

Oh, and even worse, there is a room called the Duke’s Bedchamber, and it is where Henry VIII supposedly slept. Rather you occupy it, my friends, than me!

Here is a link to the hotel’s website. It contains some wonderful aerial views of the castle and grounds. Worth looking at! 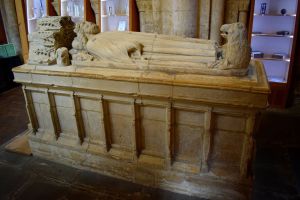 The precise location of the 937 battle of Burnaburh, at which Athelstan reasserted the authority of the House of Wessex over Viking, Scottish and Welsh forces has not been conclusively determined yet and nor has the anniversary, although it could not have been before Vikings crossed the Irish Sea in August. What we do know is that Athelstan succeeded his father, Edward the Elder, in 924 and died two years after the battle, unmarried, to be succeded by two half-brothers in turn. Vikings in the north of England, and occasionally the midlands, were a feature of the tenth century after the consolidation of the Heptarchy and the re-urbanisation policy that followed.

We can also be certain that Brunaburh is somewhere in northern England or southern Scotland and that the battle was fierce with large numbers of casualties on both sides, although seemingly none among the commanders. Against Athelstan and the future Edmund I, Olaf III of Dublin, three kings: Constantine II of Alba (Scotland down to the Forth-Clyde line) and Owain I of Strathclyde (including Cumbria) had lined up their troops. Knowing the site of the battle would enable us to interpret its implications better. In this, we do have access to the Anglo-Saxon Chronicle as well as songs and poems in several languages. There are several modern settlements with similar names, from villages in Yorkshire – as favoured by Michael Wood – or on the Wirral to towns such as Lanchester and Burnley.

Viking influence in northern and central England was to resurface several times over the next century, leading to the double deposition of one Wessex king and the death of another. If one of the more northerly suggestions is the true site of Brunaburh, it would be particularly significant that the battle of Carham, in about 1018, was to settle the eastern Anglo-Scottish border, adding the Lothians to the Scottish kingdom – until Richard III’s time.

Who was the first bastard slip to grab hold of the crown of all England….?

Bearing in mind that I am  NOT a historian, here is a little teaser to pass the time. We all know the texts from the Bible about bastard slips not taking root, and the sins of the fathers being visited on subsequent generations. Right, so what happens if we apply that literally to the throne of England? Just how far back do we have to go to find the first illegitimate person to sit on the throne of all England?

Pope Adrian I and Charlemagne

In 786, Pope Adrian I announced that a king could not be begotten in adultery or incest, and if he wasn’t either of those but illegitimate anyway, he still couldn’t have the throne of any kingdom. Should this decree be my quest’s starting point? There were different kingdoms within England, but they were Christian, and if the Pope decreed, then he ought to have been abided by. Right?

Egbert of Wessex – Ruler of England

There is an interesting timeline of our early kings at http://www.historic-uk.com/HistoryUK/KingsQueensofBritain/ and if I follow it, the first mention of an illegitimate king (after the all-important 786 date) is Harold I, 1035–1040, known as Harefoot. The English line of kings had been ousted by the Danes, led by Sweyn Forkbeard. Sweyn’s son Canute had succeeded him, and Harold Harefoot was Canute’s baseborn offspring.

Tut, tut, Harold Harefoot. You broke the Bible’s rules, because on Canute’s death you sneaked the throne from behind the back of your legitimate half-brother, Harthacanute, who was abroad at the time. BUT—big but—Harthacanute took the throne back, had the by-then-dead Harold dug up, beheaded, and chopped into bits to be thrown in the Thames. There’s nothing like making absolutely sure someone ain’t gonna come back!

So, illegitimate Harold Harefoot was a mere blip. But he had been crowned king, which was one in the eye for Pope Adrian. We have to ignore the fact that coronation vows and anointing make a man a king regardless. We’re talking the Bible’s texts mentioned at the beginning of this article. And because we’re talking the Bible, if Harold I had sons, legitimately born or not, they could not have succeeded. So any line that might have descended from him would be illegitimate, to the whatever generation.

Next the throne zipped back to the English line. Harthacanute had been the Danish-line son of Canute by Emma of Normandy. Emma had been married before, to English-line Aethelred the Unready, by whom her eldest son was Edward. The Danes had pushed Edward aside, but now his half-brother Harthacanute declared him to be his heir. 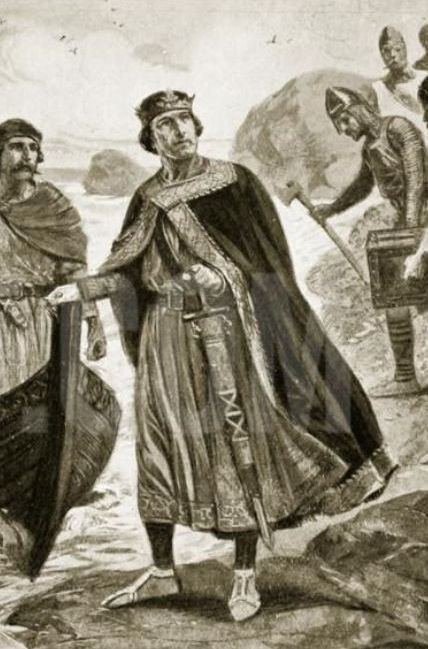 Edward, who became known to posterity as  St Edward the Confessor, became king and was married, but died childless. Dang! Another crisis.

Death of Edward the Confessor

After the Confessor, the throne went to someone who was elected by the Witan, Harold Godwinson, who was, of course, the King Harold who was defeated at Hastings in 1066.

And who conquered him? Why, someone known as William the Conqueror, and also as William the Bastard! Oops! We have to stop right there, because the Bible says that anyone, anyone, who descended from William would be forbidden to ascend the throne.

William of Normandy – the Bastard

Which brings me to the next question. Let’s imagine Hastings went the other way, and William escaped back to Normandy, or died in battle or was captured and executed. Who should have been king after Harold Godwinson? Well, he was famously connected with Edith Swan Neck, who was judged by the Church to be merely his mistress because they only married according to Danish law. So their six children were all barred. It was Edith Swan Neck who was said to have identified Harold’s mutilated body after Hastings, recognising it by a mark only she knew. 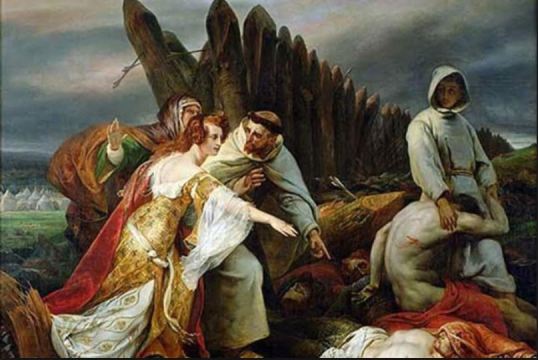 Edith Swan Neck recognises Harold’s mutilated body by a mark only she knows.

But in January 1066 (presumably because he needed an undeniably legitimate heir) Harold had married another Edith, the widow of the Welsh prince Gruffydd ap Llewelyn. In church this time. One wonders if Edith Swan Neck really was the only one who knew his body that intimately. Perhaps this second Edith had spotted the mark too! Anyway, by Edith II he had two sons, another Harold and Ulf, who might have been twins, given that their father died at Hastings in the September.

Both boys survived into adulthood, and in all likelihood sired offspring of their own. Mind you, the legitimacy of said offspring remains unknown. They too could have hooked up with unacceptable partners like Edith Swan Neck! Or become monks, been gay, or not interested in anything. It’s all annoyingly shrouded in mystery.

So, is it at this point that the true line of the Kings of England disappears into the mist?

You’ll no doubt be pleased to know I don’t intend to investigate further, but it does make me wonder just who might be on the throne now if those texts from the Bible had been followed to the letter. The history of England would have been so different as to be unrecognisable. No Plantagenets. No House of York! No House of Lancaster. And forget the Tudors. The who? Never ‘eard of ‘em. Also no Stuarts, Commonwealth, Hanoverians or Windsors…

Of course, my reasoning above is almost certainly dodgy, as I do not doubt someone out there knows and will say. But in the meantime, might there be a busy, diligent soul somewhere (someone who only dreams in Latin!) delving into ancient records and manuscripts, trying to trace the heirs of Harold and Ulf…? How interesting if that diligent person were to discover the real present-day King (or Queen) of England.

Hmm. Would anyone dare announce such a thing? After all, William the Bastard’s White Tower still stands, and those Tudor-garbed Beefeaters still rattle lots of ominously big keys.  All I know is that I’m certainly not the rightful Queen of England – so don’t come knocking on my door in the middle of the night to haul me off to Tower Green.

Following our previous post, This tells us about some specific mediaeval buildings ands structures.