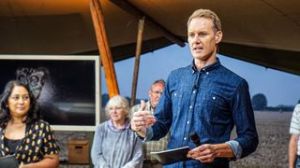 There are several interesting archaeology series on television and Channel Five has now joined in with an ensemble programme, headed by two familiar personalities (Dan Walker and Michaela Strachan) and a similarly ubiquitous chief archaeologist (Raksha Dave), but with more of an emphasis on metal detecting for the British Museum’s Portable Antiquities Scheme, including Roman and Anglo-Saxon coins. The first episode was filmed principally in Northallerton by the castle ruins and the second mostly by Loch Leven, where Mary Stuart was first imprisoned after abdicating under duress in 1567.

The team then continued to Fincham to study evidence for the development of (Bishop’s) King’s Lynn, but was also of interest to Ricardian viewers due to the small gold book found by the Neville castle of Sheriff Hutton last year. The final part featured Southwark Cathedral and the mud by London Bridge, where a Roses badge and Boudicca-related material was found. Each show also included a number of additional finds at minor venues, some as the result of “scuba-detecting”, as recent as a Lancaster bomber that crashed in Norfolk during 1943, making nearly two millennia of finds.

The programme is a little more blase about the subject than many others.