‘So rude a matter and so strange a thinge,

Old St Paul’s where the tragic Edward Earl of Warwick was displayed in February 1487 and with ‘Lambert Simnel’  on the 8 July 1487.  ‘Old St Paul’s Cathedral Seen from the East 1656-58’ Wenceslaus Hollar.  The Metropolitan Museum of Art, New York.

I have gathered much of the information to be found here from the excellent  books written by Michael Barrett (very helpful having all the key sources in chronological order in an appendix), David Baldwin (very useful for the battle of Stoke ) and John Ashdown-Hill for candidates for the ‘Dublin King’.  Articles by Gordon Smith, Barrie Williams and Randolph Jones were also invaluable.

Richard of Shrewsbury was very soon passed over (Perkin Warbeck anyone?) which leaves us with Edward V,  Edward Earl of Warwick and Lambert Simnel.

I’ve tried to work out logically who the Dublin King was and not factually as that is of course  impossible.

Let us look at Lambert Simnel: 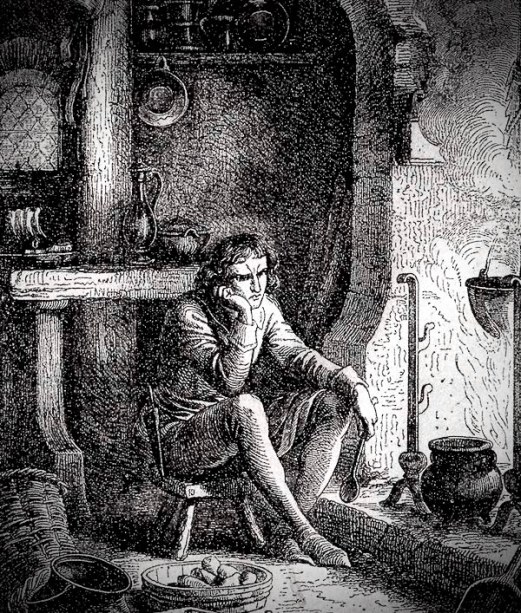 ‘Lambert Simnel’  as a scullion in the kitchen of Henry VII.   Artist unknown.  Getty images.

Despite historian A F Pollard opining that ‘No serious historian has doubted that Lambert Simnel was an imposter’ historians have still doggedly expended large quantities of ink on the probability of whether or not  the ten(ish) year old boy known as Lambert Simnel  was the young lad who was  crowned in Christ Church Cathedral, Dublin on the 24 May 1487.   The next favourite seems to be the Edward the young Earl of Warwick although he was, to all intents and purposes, firmly lodged in the Tower of London at the time.   For same strange reason the chances of the young Dublin king being Edward V have been, on the whole,  overlooked which is exactly what the Tudor regime had hoped would happen.   It should be remembered that Edward V and his siblings, including Henry’s queen had all been declared legitimate by Henry’s Parliament in January 1486  and if it got out that a young lad claiming to be Edward V had been crowned in Dublin it was going to open a very unpleasant can of worms for Henry.   This fact may also have focussed Lincoln’s mind on the fact that as Edward V was now legitimised he would have been the rightful king and in the event of the rebellion proving successful it would have proven difficult for him to make a try for the throne.  Perhaps loyalty and decency never allowed the thought to creep into his mind anway.   To muddy already muddy waters further it is unclear whether the boy king was crowned Edward V or Edward VI.    This is despite it being totally illogical that Lincoln would  have thought it a sensible plan to have a blatantly fake Edward of Warwick or even the genuine  article crowned.     This is baffling and has never been  convincingly explained.  Although  evidence is lacking  that Richard III either made Lincoln his heir or intended to do so,  the fact is that  after the death of his son, Edward of Middleham,  he appointed Lincoln Lieutenant of Ireland,  a post that had been held by Edward and this  may  indicate the likelihood that he did indeed intend to make Lincoln his heir rather than the much younger Edward Earl of Warwick.  Richard may have stated his wishes on the eve of  Bosworth should things go wrong, which they did.   But  there is another option which I will return to later.  Obviously the truth of the matter went to the grave with Lincoln, which annoyed Henry VII no end,  but as way of explanation it has been suggested Lincoln may have believed  he would have been unable to attract enough followers –  so to follow that logic through –  the suggestion is,  that he believed the 12 year old son of the attainted George Duke of Clarence would? This is absurd.  This is put forward despite the fact that he, as a competent  adult of the Yorkist royal family with unquestionable and untainted  lineage would surely have been preferable to the young son of Clarence whereas for him to stand aside for a true son of Edward IV makes perfect sense.    Suggestions have also been mooted that he may have wanted to rule through a puppet king i.e. young Warwick,  or even take the throne from himself in the event the rebellion was successful.  Only wait, wouldn’t he have had a problem with then turfing the young Warwick, now the newly crowned king,  off the throne?  Why not just go for it himself?  However perhaps the most difficult sticking point  with Warwick being nominated as Richard’s heir would be that he had no legalclaim to the throne because the issue of his father, George Duke Clarence had been barred in an Act of Attainder which was  reiterated later in Titulus Regius (The Royal Title) :

‘Moreover we consider howe that aftreward, by the thre estates of this reame assembled in a parliament holden at Westminster the xvijth yere of the regne of the said King Edward the iiijth, he then being in possession of coroune and roiall estate, by an acte made in the same parliament, George Duc of Clarence, brother to the same King Edward now decessed, was convicted and attainted of high treason; and in the same acte is conteigned more at large. Because and by reason whereof all the issue of the said George was and is disabled and barred of all right and clayme that in any wise they might have or challenge by enheritence to the crowne and roiall dignitie of this reame, by the auncien lawe and custome of this same reame …’

To be fair it’s possible Richard could have overturned this just prior to Bosworth and the evidence lost,  but how likely would it have been that he would have passed over the adult Lincoln in favour of a small boy 10 year old boy.  It makes no sense.   Surely if the worst came to worst, which it did,  he would want a strong hand at the helm to take the House of York safely forward?

A cursory look into Lambert’s story will immediately throw up contradiction after contradiction.     For example even the  name of the priest who ‘mentored’  Lambert, and is therefore a person of importance,  is completely muddled being either  William Simonds or Richard Simons depending on what version of events you are reading.   For example on 17th February 1487 the proceedings of a convocation of Canterbury,  held at St Paul’s,  were noted by a clerk to John Morton Archbishop of Canterbury.  To whit a priest William Simonds, 28 yrs old, confessed to the big wigs gathered there that he had ‘abducted and taken across to places in Ireland the son of a certain organ maker, of the university of Oxford, and that this boy was there reputed to be the earl of Warwick’ and that afterwards, Simons himself, was with Lovell in Furness Falls to reconnoitre a suitable place for the Yorkists to land.  Honestly you couldn’t make it up… but still …onwards!  Simonds was then taken to the Tower of London as Morton was already holding a  prisoner, being held for the same offence,  at Lambeth and lacked the room for another.   Note that neither the boy or his father at this stage had been named.