Markenfield Hall viewed through the Gatehouse.  A 14th century moated manor house and one time home to the Markenfields. Photo National Garden Scheme.

Markenfield Hall, near Ripon, Yorkshire is surely the epitome of a survivor of medieval manor houses.  The building of the Hall begun in 1230 and was rebuilt and enlarged by John de Markenfield c.1310.  This Markenfield,  d. by 1323,  was  an unpleasant man, one of Edward II’s leading officials ,  and was given permission to crenellate in 1310 when he became Chancellor of the Exchequer.

‘Pardon to John de Merkynfeld, canon of the church of St Peter York, for the rape of Sybyl, late the wife of John de Metham, knight, whereof he was indicted’ (1).

The Hall was steadily improved by the Markenfields who came after,  until disaster struck in 1569 when it was confiscated from them and metamorphosed into  a farm.    However the house, which has been continuously inhabited in one way or another since it was built has now been fully and lovingly restored.     It’s an irony that such a violent and aggressive bully left behind him such a glorious legacy that is Markenfield Hall.  However tempus fugit and the house remained in the Markenfields hands for many generations passed down through a succession of  heirs, most confusingly named Thomas.

One debt of gratitude owed to the odious John is  the completion in 1310 of the Chapel of St Michael the Archangel built in the heart of the Hall.   It was in this chapel on the 20 November 1569 that one of the Markenfields, another Thomas,  and the leaders of The Rising of the North gathered to hear a Catholic Mass before their departure on their doomed enterprise.    During the time of the Hall’s life as a farm the chapel was used by the farmers as a storage area for their grain and it is only by sheer good luck that the glorious 14th century piscina and traceried east window have survived unscathed.

14th century double piscina in the Chapel with the Markenfield  family arms.   Piscinas were situated near altars and used by priests for washing their hands and chalices.

Although the Hall had its own chapel, most family members were buried in their chantry chapel at Ripon Cathedral. 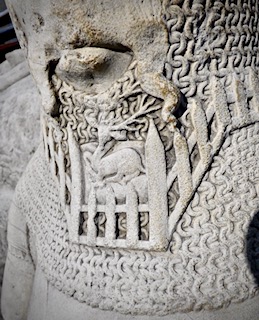 Sir Thomas’ interesting collar depicting a stag in a little field within a fence. This is thought to have marked his adherence to Richard II whose emblem was a white hart.  However it is also thought it was a rebus/pun on the family name  ‘Mark in Field’ – a mark being the quarry in a hunt.  Perhaps it was both….

Among the later owners of the Hall in the 15th century and those turbulent times known as the Wars of the Roses was yet another Thomas: