This series finally resumed on Channel Five at the beginning of October, to cover two of the newer structures over the Thames, neither of which are in the original form. As usual, Rob Bell’s enthusiasm is infectious and his programmes are highly informative. 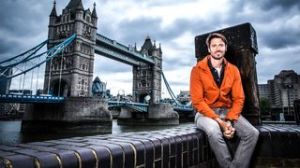 Episode Three covered Westminster Bridge. By 1700, the population of London was growing rapidly to about half a million people but only one bridge served them and their economy. The guilds of London, particularly the Company of Watermen, had opposed building any more to the west, to the extent of bribing Charles II.

However, by 1736, a commission to build a bridge beyond the “City of London” boundaries was established and it appointed Charles Labelye, from Switzerland, to build it. After a little sabotage, the watermen were paid off and Labelye’s men had half-built a timber bridge by 1739, only for it to be hit by a hard winter marked by one of the last Frost Fairs on the river. The construction team moved on to Portland stone, which cost three times as much as wood, and the bridge, longer than London Bridge and with fifteen arches, opened in autumn 1750, partially funded by a lottery. The “Wool staple” area by the river had been cleared of its slums, taverns and almshouses and the Thames was narrowed at a few points. 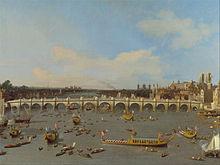 Canaletto painted it (left) during the decade he spent in England. The river bed is composed of clay and the bridge slowly began to sink, to be closed at about the time the nearby Palace of Westminster burned down in 1834. Parliament was rebuilt in a majestic Gothic style and the new

iron bridge, designed by a Londoner named Thomas Page, followed in 1862. It was even painted green to match the Commons benches.

Nowadays, it is frequently a venue for one protest or other but this has been true for a while – such as a Suffragette march in 1908. 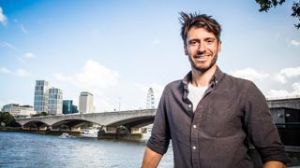 The series concluded with Waterloo Bridge, which is even more recent. London was not designed for the million people it housed by the late eighteenth century and the “Company for the Strand Bridge” was formed to raise funds to link the affluent Strand with the downmarket Lambeth and Southwark. Windmills were prolific south of the river, providing a lot of work for local residents, until the steam-powered Albion Mill arrived and burned down 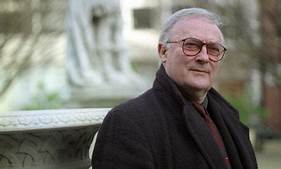 John Rennie, a Lothians man who had worked for Watt and had partially built Albion Mill, was hired to complete the bridge in 1811. He pumped water out of the foundations with steam and built the bridge with Cornish granite, using clay, gravel and broken flint for the road, finishing an expensive structure of more than half a mile in 1813, soon renamed for the Belgian battlefield. A tollbooth at each end charged a penny or more, although those travelling from the south could afford it less. The other bridges in existence by then had no toll. 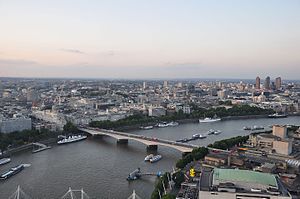 By the 1920s, Waterloo Bridge was sinking as others had done. A replacement was planned as early as 1935 but construction was delayed by the outbreak of war. Just like Sutton Hoo, it was vunerable to bombardment and the usual building workers were conscripted, but they were replaced by women hence the alternative name: “Ladies’ Bridge”. It was completed in 1942, in an event recorded on Pathe News, although it was half-opened in 1945, as one of thirty-five bridges that now exist over the Thames.