A guest post from John Dike who is leading Philippa Langley’s Missing Princes Project team in Devon and following on from my post A Portrait of Edward V and Perhaps Even a Resting Place?  :-

The window in the Evans Chantry, St Matthew’s Church, Coldridge.

As far back as the writings of Beatrix Cresswell in the early 1900’s, learned authors have been puzzled by the rare stained glass window of Edward V in the Evans Chantry at Coldridge Church, Devon,  one of only four contemporary depictions of him in glass. Edward V was one of the two “Princes in the Tower” who disappeared, presumed by some to have been murdered by his uncle Richard III.   Later authors than Cresswell have speculated that Evans was in fact Edward V,  living a secret life in Coldridge.  It might sound far-fetched but there are a number of clues that add up to this possibility. The true identity of John Evans is currently under investigation by a small team of amateur historians under the guidance of Philippa Langley MBE who was responsible for the discovery of the grave of Richard III at Leicester. The following points are of interest.

At some point after the battle of Bosworth in 1485,  John Evans was granted the Manor of Coldridge and the Stewardship of the Royal Coldridge Deer Park by Thomas Grey, Marquess of Dorset and half brother to Edward V.   He took over these estates from Robert Markenfield who had been granted them by Richard in 1484. Robert was the brother to the more famous Sir Thomas Markenfield who fought for Richard at Bosworth. Both the brothers, who were from Ripon in Yorkshire, were friends and Richard was extremely generous to Thomas (1). It would thus seem very strange that although Sir Thomas was granted much wealth, his brother, another good friend, was sent to a small and remote village in Devon. I will come back to this later. After Richard was killed at Bosworth and Henry VII took the throne,  Robert Markenfield moved to nearby Wembworthy and become an associate of Sir John Speke who held the Manor there.

Being appointed the Parker was a prestigious appointment for Evans and allowed him to give favour to local dignitaries on behalf of Thomas Grey. The Deer Park was approximately 3000 yards in circumference and in 1525 had 140 ‘beasts of the chase’. Existing place names indicate the area of the park on a modern map.   Higher Park, Lower Park, Lower Park Break, Park farm, Park Wood  etc., Park Mill was originally called Parker’s Mill. Long Parks named from Parker’s Long Field but adjacent to Coldridge Barton, John Evan’s manor house.

The chantry was built by John Evans and completed in 1511.  We know this because it originally contained two prayer desks with the inscriptions ‘Pray for John Evans, Parker of Coldridge, maker of this work in the third year of the reign of King Henry VIII’ and ‘Pray for the good estate of John Evans, who caused this to be made at his own expense the second day of August in the year of the Lord 1511’. 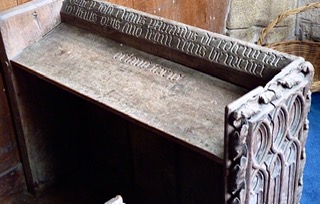 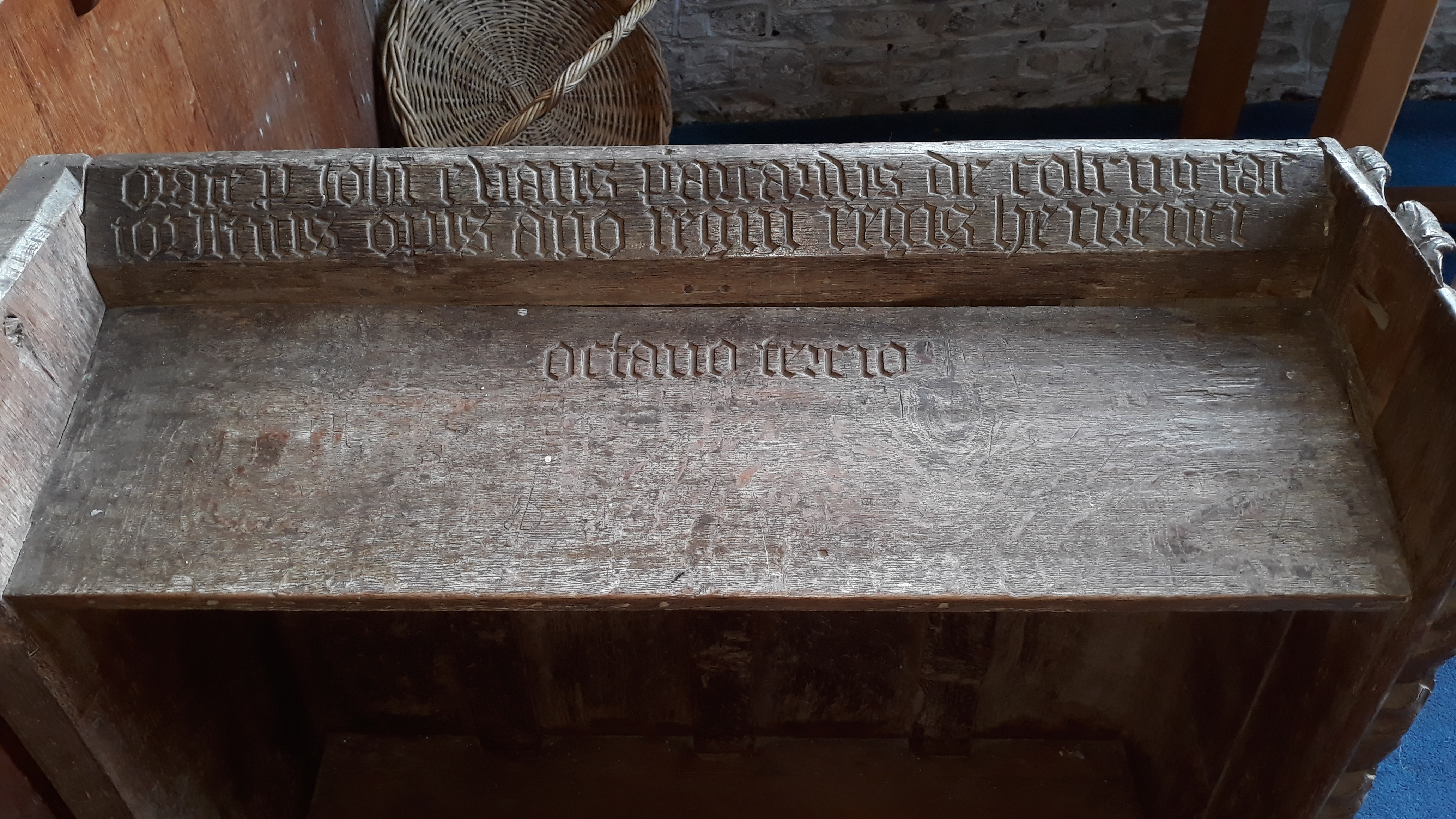 ‘Pray for John Evans, Parker of Coldridge, maker of this work in the third year of the reign of King Henry VIII’

The prayer desk front with the bench behind.  Photo John Dike.

Another view of the renovated prayer desks and bench.  It’s possible the bench and other pew ends were originally part of the furniture in the Evan’s Chantry and added in 1930s when the desk was restored.

By the early 1900’s these prayer desks were in poor condition and in 1930 the Rural Dean requested that these valuable objects be renovated. And so by 1931 a Miss Harris had rescued the desks by combining the remains into one with the new top engraved with the first inscription above. This desk is now in the Barton chapel as the Evans Chantry is now used as the vestry. The desks are significant as they confirm that John Evans was in Coldridge before 1511. As a chantry was intended to establish a ritual of prayer to speed the donor to heaven, it was likely that, with the then short life expectancy, he was around 40 years of age when it was finished. This would mean that he could have been the same age as Edward V who was born in 1470!.