In the light of Tim Thornton’s recent claims relating to allegations made by Thomas More, I must start by saying I have never remotely considered taking Thomas More seriously as a historian of King Richard III, and nor would anyone who has read Richard Sylvester’s masterly analysis. But I do take him seriously as a religious fanatic who didn’t stop at condemning respectable people to hideous punishments. I hope the fate of the innocent merchant tailor Richard Hunne will never be forgotten. The rough outline goes like this (but check it for yourself): Hunne brought a lawsuit because his local church was seeking to charge him exorbitant mortuary fees. Bishop Cuthbert Tunstall, a friend of More’s, excommunicated Hunne, charged him with heresy and threw him into his (the bishop’s) prison where he was murdered. This is how More’s biographer 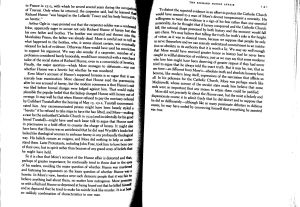 Richard Marius, bending over backwards to exonerate his subject, explains More’s defence of Tunstall in the face of clear evidence that Hunne was killed (p.140): “In More’s view, heretics were such demonic people that it was fair to believe anything bad about them, no matter how outrageous. More presents us with a Richard Hunne so depressed at being found out that he killed himself, and so depraved that he tried to make his suicide look like murder.” How can you accept the testimony of a man like More who will make up a lie to deny justice to an innocent man? Let us ask ourselves how many other men’s names and reputations were blackened by this man’s connivance … just because he could.

Award-winning non-fiction author with a preference for history and biography. Biographical works include prominent figures in music and aviation, plus five books on King Richard III.

View all of Annette Carson's posts.