On April 9 of 1445, a determined fifteen-year-old French girl arrived at Southampton. She had been ill before her departure and seasickness from the crossing added to her discomfort. Nonetheless, she ploughed on further inland with her entourage toward  the house of the Premonstratensians at Titchfield in Hampshire.

Whether she looked forward to the journey or not, history does not record. But young Margaret of Anjou, daughter of Rene the Good,  was going there to marry a King.

History also does not record what the bride thought of her unworldly twenty-three year old groom, who was known for his monkish piousness and his prudery (he once became distressed at a banquet when he saw that the dresses of the dancing ladies showed too much cleavage!), nor does it say what Henry thought of this young girl, described as beautiful and intelligent  by some, by others called a she-wolf, although it is known he gave her a golden ring set with a ruby, made from a ring he had worn when he was crowned as King of France. Bishop William Ayscough of Salisbury conducted the marriage ceremony.

Interestingly and unusually, Margaret brought no dowry to England with her; instead Charles VII of France would be given Maine and Anjou by Henry.  Needless, to say this move was controversial in England with many factions deeply dissatisfied by this loss of English territories.

The countdown to war was on, and Margaret, a far stronger  figure than her weak and ailing husband, would have a large part to play in the forthcoming battles for the crown…

Today Titchfield Abbey stands as an impressive ruin in a small village. The large towers of the gatehouse remain from a later structure, Place House,  inserted after the Dissolution by Thomas Wriothesley, Earl of Southampton. However,  he did not tear down the entire medieval buildings  but incorporated many of them, which are now visible again after its last owners, the Delme family, decided to dismantle the house and turn it into a ‘romantic ruin’ in 1781.

Among the ruins are some remarkable medieval floor tiles, perfectly preserved by the Tudor porch that went over them. The most striking are the tiles bearing a Latin inscription  which would have been seen by the canons as they gathered in the refectory at meal-time. The translation is as follows– ‘Before you sit down to meat at your table, first remember the poor’. 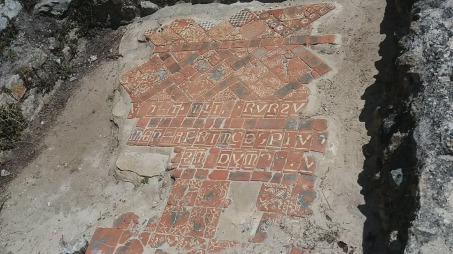 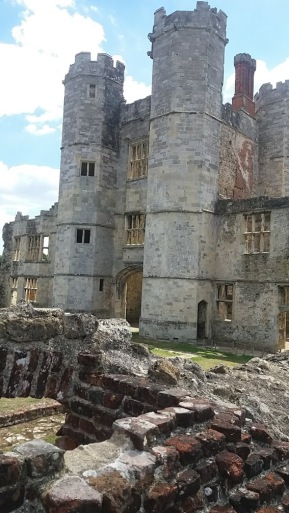