Skip to content
Reblogged from sparkypus.com A Medieval Potpourri
https://wordpress.com/post/sparkypus.com/754

Minster Lovell Hall, Oxfordshire  lies in beautiful,  atmospheric ruins set amongst trees besides the River Windrush in the heart of the Cotswolds.     Pevensey describes these ruins to be ‘still the most picturesque  in the country’.   It was at least the second manor house to be built by the Lovells on that site, the first having been built in the 12th century.  William Lovell Baron Lovell and Holand (d.13 June 1455) already rich and having  increased his wealth by a  very advantageous marriage,  built the second Hall  some time after  his return from the wars in France in 1431(1)  Its unclear whether part of the earlier buildings were incorporated into the new one as Pevensey suggests or the old buildings were entirely demolished.  But undoubtedly  materials from the older buildings would have been recycled in the new build.   The foundations of the earlier house were discovered beneath the east and west wings in the 1937/39.   It remained  home to the Lovells up until the Wars of the Roses.

A drawing of the Hall as it may have appeared in the 15th c.  Alan Sorrell 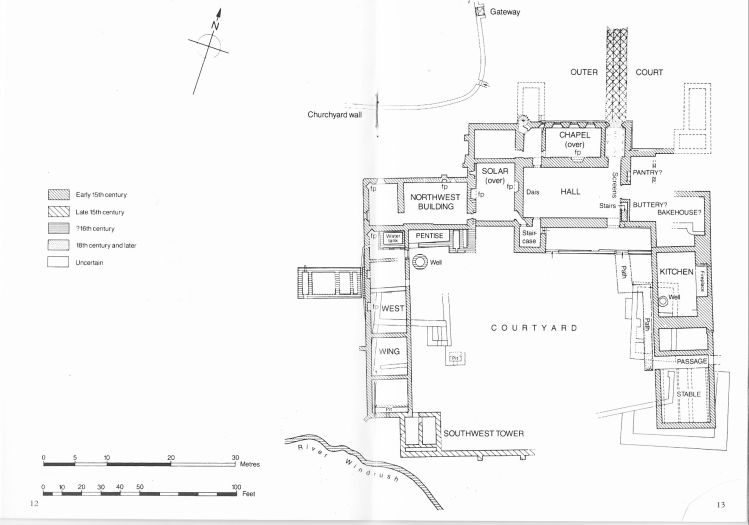 The porch and  Hall from the north.  Photo @ Guy Thornton

Undoubtedly one of the best known of the Lovells is Francis Lovell b.1457.   Francis was a close and loyal friend to King Richard III.  Both had been  wards of Richard Neville, Earl of Warwick, known as the Kingmaker and both spent part of their childhoods at Middleham Castle although possibly not at the same time.    Francis’ life is documented elsewhere and I dont want to go into it too deeply here but suffice to say history has judged him kindly.  He seldom fails to get a mention in any fictional work about Richard and as far as I can tell he generally comes over as a good egg.  Of course there is the infamous rhyme that was pinned to the door of old St Paul’s.  ‘The Cat, the Rat and Lovel our dogge, Rule all England under an Hog’.  The author of the rhyme William  Colyngbourne, was later to get the chop, or hanged, drawn and quartered to be precise, under a charge of treason for another matter, although I should imagine the rhyme was burnt into everyones memories present  at the trial.  Strangely enough Colyingbourne was once employed by Cicely Neville, Richard’s mother and its been suggested he may have copped the needle when Richard wrote to her requesting Colyngbourne’s position be transferred to someone of Richard’s choice (2 ).   However I don’t wish to go off on a tangent here so back to Minster Lovell and the Lovells.

Its  unclear whether Lovell was at Bosworth as Richard had sent him to guard the south coast against Henry Tudor’s threatened invasion     Attainted of high treason after Bosworth in 1486 his lands were granted to Jasper Tudor, who held them until his death in 1495 after which they reverted back to the Crown.  However having survived the  aftermath of Bosworth,  June 1487  found Lovell at the Battle of Stoke, where, as the story goes, he was last seen making his escape (3)

After that Francis disappears into the mists of time.  This leads to the 18th century tale of   during  the process  of a ‘new laying’ of a chimney,  a  secret room was discovered  wherein  a skeleton assumed  to be that of Francis was found.   The skeleton, which was ‘sitting at a table. which was before him, with a book, paper, pen etc etc’, conveniently disappeared  into a puff of dust upon the room being opened (4).    The conversation which followed, if it ever happened, which I doubt,  can well be imagined  ‘what happened to the body dolt?’ – ‘it disappeared into a cloud of dust sir’.  Hopefully this old chestnut has been well and truly put to bed now.

Anyway – the manor house was built around a quadrangle with the southern side facing  the Windrush,.  Its hard to imagine a more idyllic site.  Approached from the north a diaper patterned cobbled  path leads up to the entrance porch which leads into the  hall.  The solar and private apartments are grouped to the west, the kitchen and service quarters to the east.  There was a chapel to the north of the hall above the entrance porch.  Nothing remains of the chapel today, the four windows of which can be seen in Buck’s engraving. 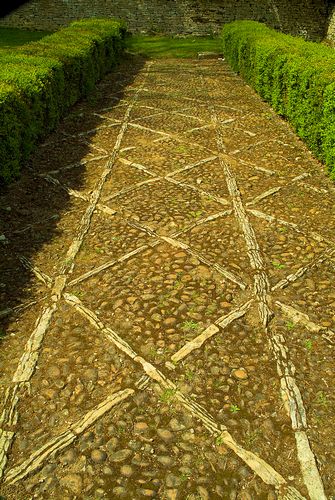 The diaper patterned cobbled  path leading up to the Porch

Vaulting on the ceiling of the porch

In 1602 the Hall was sold to the Coke family who owned it until 1812.  It was during the ownership of the Cokes that the Hall was dismantled about 1747.  ‘The remains were then left to fall into decay although part of them were used as farm buildings (5). It then passed through several owners until finally in 1935, the then owner, a Mrs Agnetha Terrierre passed the ownership into the hands of the state.

The solar was accessed by a staircase south of the dais in the Hall.  Lit by two large transomed windows, both with tracery, it had a fireplace, traces of which can still be seen, and set of stairs leading up to the chapel.  The solar would have been the personal and private  chamber for the family.  Perhaps it was in this room that Francis spent time with his friend, now King Richard III, when Richard stayed at the Minster Lovell in 1483 during his Progress {pingback to 29 August} after his Coronation.

This once two storied building, which probably contained further private apartments of the Lord and his family initially survived the  destruction of the 17th century and was being used in the mid 19th century as a barn –  a door being cut into one of the walls to enable carts to be driven in.  This unsurprisingly led to the roof collapsing.   Then a small cottage was built in that area, the foundations of which have now been removed.  All that remains of this cottage is a small fireplace built into the north wall and a window that was partially blocked up.   The upper floor had transomed windows with window seats on the west side.

There were five room in this wing which led to the South West Tower.

The tower consisted of 4 floors, the top floor having battlements.  Its slightly later than the rest of the buildings being later 15th Century.  On the ground floor were garderobes, the pit being on the side nearest the river.  A external staircase led to the first floor and access to the remaining floors.

On the East Side of the courtyard were situated the kitchens, bakehouse and stables.

We cannot depart the Hall without a look around  St Kenelm’s Church which stands close by.    Most of the church that can been seen today is 15th century built on earlier foundations.  In the transept can be found a fine alabaster tomb chest with the effigy of a knight.  The effigy’s armour and the costumes of the weepers  dates  it to the mid 15th century.  Traditionally a member of the Lovell family it could be either William Lovell d.1455 or more probably his son John d.1465 (6). Unfortunately  due to the lack of an inscription it cannot be said with certainty whose monument it is.

Entry into this  wonderful place, now in the care of English Heritage, is free of charge.  If you should ever fancy a wander around these evocative ruins I would suggest you wrap up and go in the quieter months.  The summer months  can be  rather busy with families picnicking and children splashing in the River Windrush.  And who can blame them – there are not many places that can match Minster Lovell for being quite so magical.

2) Richard wrote a letter to his mother 3 June 1484 requesting ‘my lord Chamberlaine..be your officer in Wiltshire in such as  Colynborne had’  Richard III Crown and People p105 Kenneth Hillier

3) According to Francis Bacon ‘there went a report that he fled and swum over the Trent on horseback but could not recover the other side and so was drowned.  But another report leaves him not there but that he lived long in a cave or vault‘.

4) Letter written by William Cowper, clerk of the Parliament to Francis Peck, an antiquarian 1737.