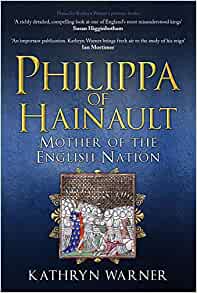 Kathryn Warner has been Edward II’s main chronicler for a few years now, writing about the King himself, his times, his great-grandson Richard II, several other relatives the roots of the “Wars of the Roses”. This book is about Edward’s daughter-in-law, although he tried a little to prevent his eldest son’s marriage during his own reign and apparent lifespan.

However, Edward III did marry Philippa of Hainault and the marriage lasted for over forty years, during which time they had twelve children. Edward and their sons, particularly their eldest Edward the “Black Prince“, played a full part in victories at Crecy and Neville’s Cross. In a parallel with Richard III and his siblings, a thirteenth child, one “Thomas of Windsor”, has been added by modern writers serving as posthumous surrogate mothers, although not the same writer who gave Richard an elder sister, “Joan”, and added an “Edward” to Mary de Bohun’s sextet of children by the future Henry IV.

This is one of the relative few biographies I have purchased of a royal woman and feels very much like another one in particular. The first chapter, just like Ashdown-Hill’s best tome, explores the subject’s family in great detail but, unlike Eleanor and Paul Johnson’s Elizabeth I, Philippa of Hainault becomes pregnant regularly and has children, their ages are regularly mentioned and she, with Edward, formulates marriage plans for them, not all of which come to fruition.

This is a fascinating book, delineating a veritable matriach. As for our subtitle, peruse the above map. Hainault is on the eastern loop of the Central line, near Newbury Park. Elephant and Castle, on the Northern Line and near the Thames, is reputedly named after Edward II’s mother, although probably in error.