If you go to York and enter Micklegate Bar heading towards the City Centre, you will see a wonderful medieval gem on your right, the church of St Martin-cum-Gregory, of which

Richard III was patron (below left). Its name is due to the fact that the present church is the result of two different churches’ fusion, St Martin and St Gregory. In the Middle Ages, York was a city with many churches but, at some point, especially after the Great Plague, the population was slashed and, as a consequence, many of them became redundant; St Gregory on Burton Lane was one of them. In addition to the reduction of the population, after the Reformation, St Martin was scheduled for closure but in 1585 it was decided to knock down St Gregory and to merge the two parishes. The nave of St Martin-cum-Gregory church was built in the 13th century while the side aisles were possibly added at the beginning of the 14th century, the chancel in the 15th century. 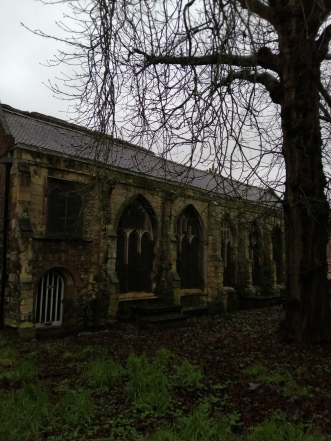 In 1565, the Lord Mayor had given 100 marks to buy three bells. The original steeple had to be removed as it was dangerous and it was rebuilt in 1677. Three years later, a clock and a dial were added. Due to the fact that the tower was made of bricks, the result is a strange combination of different styles. The upper part of the tower was added in the 19th century. 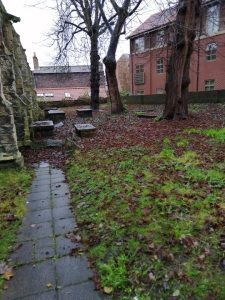 In 1828, the church-wardens and parishioners requested that the butter market, built for the second time in 1778, (the first one dating back to medieval times, had been blown away) be demolished and (sadly) this request was granted. The excuse was that for years no butter had been there and that the place had become an assembly point for riotous people. It had been used to view, search, measure, mark and seal the butter, that afterwards was sold elsewhere, even in London. The market was held every Tuesday, Thursday and Saturday, a place that today we would have greatly appreciated visiting.

St Martin-cum-Gregory is famous for its wonderful medieval stained glass and it is surrounded by a graveyard. The roof in the nave was panelled with beautiful sculptured bosses located at the angles of the intersections. In the west end of the steeple it is possible to see the remnants of a Roman family funereal monument.

Recently, the church, belonging to the parish of Micklegate along with Holy Trinity of Micklegate (to distinguish it from Holy Trinity in Goodramgate and the Methodist Church in Monk Gate) and the other parish church of St Mary Bishophill Junior, became surplus to needs and were closed.

In 2008, due to the beauty of its stained glass, it was reopened as the Stained Glass Centre. Many workshops take place there in summer and currently there is a plan to open the church to the public so it can be visited and appreciated again all the year round. This plan was set up in the hope of giving Micklegate the role it had had before, that of being one of the most interesting and visited areas in York.