The Mysterious Stone Masons of Herefordshire

Recently I had the chance to visit two of the most attractive female medieval tomb effigies I have yet encountered, both lying in their respective churches within ten miles or so of each other. Although one tomb effigy is in much better condition than the other, they are so stylistically close that it is likely they were carved by the same stonemasons or, at least, come from the same workshop.

The lady lying in the North Chapel of Ledbury’s St Michael and All Angels is a little neglected, hidden in a corner with boxes and other church items stacked in front of her, but it is well worth moving around the clutter to take a closer look. Her identity is not known (it was once thought she was one of the Audleys but that idea is now discredited) but the shields on her tomb indicate she may have been the sister of the wonderfully-named Grymbold Pauncefoot, who married into the Carew family. Lady  Pauncefoot’s  altar tomb is of late 14thc  date, with full-length effigy and a partial canopy and a row of eleven carved shields showing the arms of Carew, Pauncefoot and two Lions Passant. The lady wears a  wimple, fillet and full-length gown that flows over the edge of  the  tomb–however, at some point, sadly, her features have been defaced.

Not so the features of beautiful Blanche Mortimer who lies in perpeptual sleep in the little church of St Bartholomew  in the village of Much Marcle. Blanche was one of the children of the famous–or infamous–Roger Mortimer and his wife Joan de Geneville. She married Peter Grandison and probably lived in Much Marcle at ‘Mortimer Castle’ which stood near the church, a motte and bailey with only traces of the earthwork existing today. The Great Seal of England was handed over at Mortimer’s Castle after Edward II’s deposition in 1327, an important event that Blanche would have witnessed. Blanche and Peter had no living children  (some sources say she had a daughter Isabella, but if so, she must have died in infancy), and upon their deaths,  their lands were inherited by Peter’s brother, John Grandisson, Bishop of Exeter.

Blanche’s tomb is made of sandstone and also has a canopy and many shields bearing the Mortimer and Grandisson Arms. Like the Pauncefoot monument, her  dress is draped down over the edge of the tomb in artful folds; Blanche is also portrayed holding a rosary. Her head is covered but the unusual shape of her headdress denotes that her hair was encased in crespines on either side of her head, a fashion popular at the time. Blanche’s lead coffin still lies within the tomb–rather unusually, as most time the burials were beneath the monument.

Another stone  image probably made by the same masons as Blanche Mortimer and Lady Pauncefoot’s tombs  is in the porch at Hereford Cathedral and is of the Virgin Mary at the Annunciation. Again, the distinctive treatment of the fall of fabric is noticeable and the graceful shape of the torso is also similar to that of Blanche at Much Marcle.

The only other similar carvings in England tend to be within the Devon area–so there is some thought that Bishop John Grandisson may have either sent some of the local stonemasons to Herefordshire or imported talented local men to Exeter. 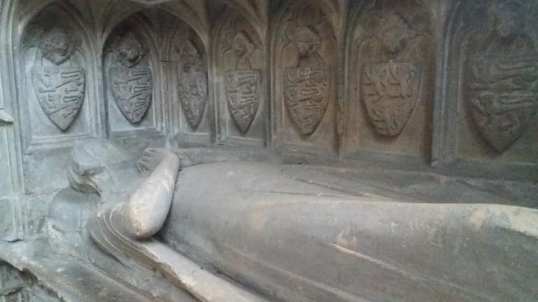 Above images: the Pauncefoot tomb in Ledbury Church. 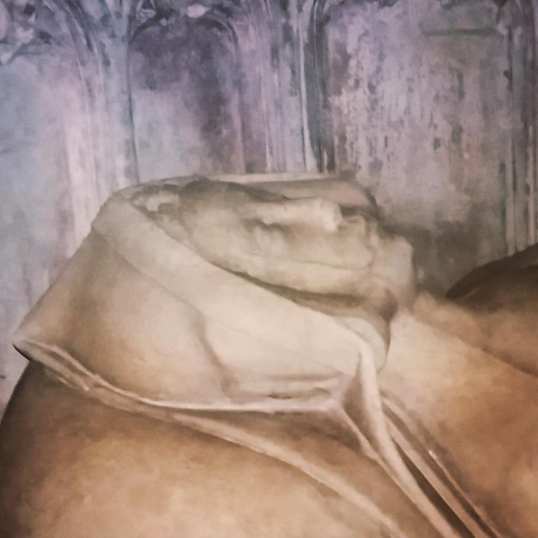