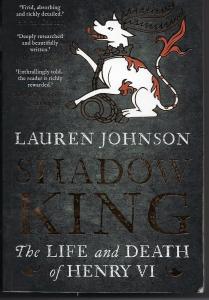 Henry VI has gone down in history as one of England’s worst kings. Not for being cruel or despotic; on the contrary, his nature was kindly and pliant, peace-loving and deeply devout – qualities that made him likeable as a person but hopeless as a monarch, a faint wavering shadow of his shrewd, martial father. His life would have been very different, and he may have become a better ruler, had he grown to manhood under the guidance of Henry V, this perfect model of the medieval warrior-statesman. Instead, by the latter’s untimely death in 1422 with his French kingdom far from pacified, the infant Henry only received the dire legacy of an unwinnable war, and perpetual bitter conflict between members of his family over the implementation of the late king’s will and their respective powers on the minority council.

Such is the context for the opening chapters of Lauren Johnson’s sympathetic new study, which sets out to ‘explore Henry VI as an evolving individual struggling in an extraordinary situation. In short, to consider him as a man.’ Recently released in paperback, Shadow King is a handsome volume, illustrated with 24 colour plates, family trees of the Houses of Lancaster, Beaufort and York, and three helpful maps, (France 1415 – 53; Wars of the Roses battles 1455 – 71; and 15th century noble landholding in England and Wales).

The well-referenced text falls into logical sections: Henry’s minority 1422 – 37; adult rule to 1453, including his marriage to Margaret of Anjou; political and mental breakdown, culminating in his deposition by Edward IV at Towton in 1461; his fugitive years, short-lived re-adeption, and eventual fate in the Tower of London. A brief ‘Afterlife’ and epilogue conclude the sad, strange stories of this unfortunate king and his queen, followed by two appendices, ‘Where did Henry VI die?’ and ‘Key Characters’, 68 pages of notes, and an extensive bibliography of primary and secondary sources.

Stylistically, some passages read like an historical novel: ‘The inky waters of the River Thames rippled and slid beneath the wherrymen’s oars. In places the peaks of the waves glistened, light falling from the windows of Winchester Palace as bursts of laughter and music echoed out.’ (Page 45). Such imaginative touches bring the text to life for many readers, although my own preference is for Johnson’s straight prose, which I found admirably clear and refreshing. Why gild the lily?

As for content, I particularly enjoyed the first two sections. Johnson makes excellent use of some seldom-used sources to paint a convincing, detailed picture of Henry’s early life. Her exposition of the complex political situations in England and France, (riven by its own civil war between the Armagnacs and Burgundians), and the equally complex personal war between Henry’s kinsmen, is lucid and easy to follow; and she offers some perceptive analyses of the likely effects on an impressionable child of having to perform the rituals of royalty surrounded by such constant conflict and tension. Theoretically wielding absolute power but practically powerless to control his feuding councillors, it’s no wonder that Henry grew up hating discord, and wishing only to please and appease the people closest to him, emotionally or literally.

However, as the story moved into more familiar territory, I felt some disappointment. Plainly no fan of Richard, Duke of York, Johnson gives short shrift to his justifiable reasons for expecting a primary place on Henry’s council/in his confidence, and justifiable chagrin at being passed over for lesser men. York’s assumption of pre-eminence was based on his royal pedigree: descended from the second and fifth sons of Edward III via his mother and father respectively, he was one of England’s wealthiest magnates with a claim to the throne arguably stronger than Henry’s. This was not lost upon the king’s beloved Beaufort kin, a legitimated line sprung from John, Duke of Lancaster’s affair with Kathryn Swynford, who, (along with sundry other jealous rivals), persistently undermined York in Henry’s malleable affections. Had Henry managed to keep his powerful cousin on-side, the Wars of the Roses might never have happened; instead, he progressively alienated York, and wounded his pride, by showing an unfair and obvious partiality for the base-born Beauforts . It seems a shame that Johnson doesn’t extend her even-handed approach to Duke Richard, or treat him as another ‘evolving individual struggling in an extraordinary situation’ who, no less than Henry VI, deserves to be viewed ‘as a man’ trying to do his best for his country, his family and himself.

I was also disappointed by the brief, conventional accounts of the battles of Wakefield and Towton, the great Lancastrian victory followed shortly by the catastrophic defeat which cost Henry his crown, changing his life – and the course of English history – forever. In a work of this magnitude, it’s inevitable that some areas will be less well researched than others; nonetheless, for such a crucial episode, it was frustrating to see some old Wakefield myths perpetuated and enlarged. Like other commentators unfamiliar with the place, Johnson describes Sandal Castle as ‘majestic’ when, as castles go, it’s quite small (Sandal would fit inside the truly majestic Pontefract Castle several times over) and utilitarian. Interestingly, the ‘meagre’ household expenditure of £4 6s 7d for the Christmas – New Year period is cited to show that the castle was poorly provisioned, whereas to me it says precisely the opposite: it was already so well provisioned that little further spending was required. (I say ‘little,’ but the sum in question represents around 18 months – three years’ pay for a labourer, or six months’ pay for a liveried archer – it’s all relative!). This debatable interpretation is then used to present a version of the battle of Wakefield which simply doesn’t make sense: York, Salisbury, Rutland and their men, driven by hunger to hunt in the deer-park ‘north of the River Calder,’ ambushed by the Lancastrian army and slaughtered. Said deer park wasn’t just north of the river – it was the Outwood, some three miles north of Sandal and two miles north of Wakefield city, with its chantry chapel of St Mary perched on the Calder bridge; an unnecessarily long way to go when Sandal Castle had its own deer-park to the south, literally on its threshold, and miles of nearby river for fishing and wild-fowl hunting. (For my personal take on the battle, see this article ) I also found her treatment of Towton somewhat superficial, and lacking reference to more recent studies such as those by George Goodwin and Tim Sutherland.

Suffice to say, if I wasn’t such a pro-Yorkist anorak about this period in Wars of the Roses history, these criticisms wouldn’t have occurred, and I would have read the whole book with the same relish as I devoured the earlier sections! So, on the whole, I’m happy to recommend Shadow King as a worthwhile read, an enthralling tragedy which left me moved and thoughtful, and which will make a valuable addition to my bookshelves.

I'm a freelance writer and lecturer, author of non-fiction works on the Battles of Wakefield and Towton, and the risque fantasy series Lay of Angor under my pen-name Rae Andrew. My hobbies are Wars of the Roses re-enactment, archery, walking, reading and cooking; and I'm passionately fond of cats, chocolate and Richard III.