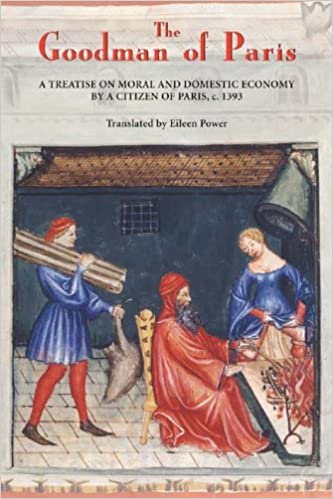 Good Friday falls today and in commemoration of the crucifixion of Christ we offer several meat free loosely-based receipts from the medieval manuscript Le Menagier de Paris or The Goodman of Paris.  First published anonymously in 1391, it is amusingly similar to Mrs. Beeton’s famous 19th century book of household tips covering diverse subjects such as food, medicine, herbs, gardening, marital accord and its corollary of good wifely behavior.

For those who follow food trends across the globe, it is always amazing and perhaps comforting to find that the French, whether living in medieval times or soaking up rays in Southern California, tend to stick to the tried and true products and gustatory formulas of their beloved patrie.  Looking through Raymond Oliver’s excellent history “The Gastronomy of France” one realizes that most medieval recipes can still be found in Jacques Pepin’s newest cookbook or on a menu at Raymond Blanc’s Le Manoir aux Quat’ Saisons in Oxfordshire.

The following receipts are adapted from a menu in the 1540 Le Menagier de Paris:

Cress and Sorrel with Vinegar

1 bunch of Watercress, 1 bunch of Sorrel, several handfuls of peas and Arugula (Rocket).  Layer the ingredients on a large white plate or bowl.  Dress with:  Olive oil, Red Wine Vinegar, Dijon Mustard, Salt & Pepper.  If dressing is too bitter, a hint of sugar is appropriate.

The French consider figs and bay leaves a match made in heaven in much the way we might pair chicken with tarragon, fish with fennel and seafood with bacon or ham. 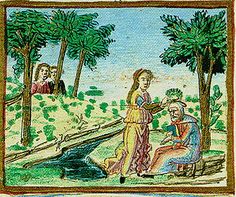 1 1/2 cups of flour (approx. 200 grams), 1 teaspoon of salt, 1 stick of cold butter (110 grams), ice cold water.   Dice cold butter.  In a food processor, pulse flour and salt.  Add the diced butter and mix until it has a mealy appearance.  Add small amounts of water until it binds.  Place dough on a cold surface and knead with a bit of flour until it forms a ball  – don’t over knead!  Place in the refrigerator for 30 minutes or overnight.  When ready to use, roll out to a nine inch circle.  Add:

Figs cut into quarters, several teaspoons of honey, lemon juice and a pinch of salt.  Mix and add to the crostata.  Place two bay leaves on top.  Fold over the edges of the crostata so that the pie mixture won’t spill out while baking.  Use an egg wash if you wish to have an attractive appearance.  Place in an oven heated to 375F (approx. 190 Celsius).  Bake for approximately 35 minutes.  While the bay leaves will perfume the crostata, they should be not be eaten.

Most of the French Lenten dishes that are included in medieval texts appear to be freshwater fish:  Trout, Eel, Perch, Pike, Carp with the occasional Cod, Sole or crustacean thrown in for variety sake.  But in looking for a dish that would satisfy a hungry penitent but not overtax one’s culinary ability, let’s turn to the New World for a receipt.   The classic “Charleston Receipts,” first published in 1950 by the Junior League, showcases the overlapping ethnic influences of anyone who ever passed through this romantic coastal city.  That would include the Creeks to the Spanish, French, British and Africans.  This receipt comes straight from Paris:

Fillet of Sole Marguery as submitted by Mrs. Robert Small

1 large sole or flounder, 2/3 cups of white wine, 1 tablespoon of flour, 2 cups of heavy cream, cooked shrimp, fresh sliced mushrooms, butter and salt.  Place filleted sole or flounder in a buttered pan and sprinkle with salt.  Pour a portion of white over the fish.  Bake twenty minutes, basting often.  Remove fillets to platter.  Thicken stock in which the fish has been baking with flour.  When well blended, add cream, shrimp, mushrooms (that have been sautéed in butter).  Now add remaining wine.  Pour this over fillets; garnish with parsley and serve piping hot. 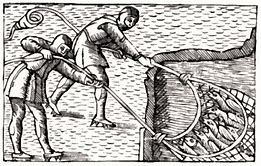 It would seem sinful to offer a dessert on Good Friday given that the recipes above feature wine, butter, heavy cream, honey and sugar.  So let’s wait until Sunday when the Easter Bunny will deliver his chocolate eggs and candy-laden baskets.