A ‘new’ late 16th century portrait of Richard III has recently emerged and gone on display at Hever Castle, home of the Boleyn family–and with it appeared the not-so-cuddly figure of the  perennially grumpy and bombastic Tudor historian, David Starkey. Since he is not an art  expert, the reason why he was commenting is slightly mysterious; one gets the feeling he was just  desperately wanting to get in yet another cutting (and now boring)  remark about Richard III (never having, it seems, got over his embarrassing televised defeat in the ‘Trial of Richard III’ way back in 1984.)

This time, he says the painting depicts Richard as a ‘murderous thug.’ Hmmm, am I the only one thinking this is a rather rich  comment coming from someone who idolises the blood-soaked tyrant Henry VIII? ( Starkey once wrote words to the effect, I’m paraphrasing  here but not far off, that ‘Henry just needed to be loved’. Pass the sick bucket.)

What the painting  really shows is an unskilled artist who lived close to 100 years after Richard’s death  who couldn’t paint hands and who  made a copy of a copy of a copy of a copy and added in a few embellishments, like flecks of grey hair, as  he went along. Having Kings’ portraits in a great house was common in this era and a little later, and there are many rather odd portraits, not just of Richard but other monarchs, from this era, as workshops went into production-mode and churned out ‘cheap knock offs’ for wealthy patrons. 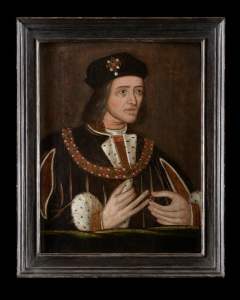 In the article, much seems to be made of the extremely long fingers mysteriously indicating a ‘cruel nature’ (rather than the ineptness of the artists) but, if certain historians are going to look at non-contemporary portraits for indications of a person’s personality…what would one say about this one of Henry VII? Henry is ALSO depicted with long, strange fingers, a tight mouth, peaked features…and weak sloping shoulders! 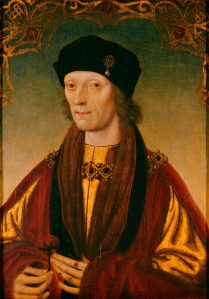 And then there are these…two more of Henry VII, both extremely unflattering, and one of his son, Henry VIII, showing EXTREMELY weird-looking hands–and THAT one was actually painted in Henry’s own lifetime! 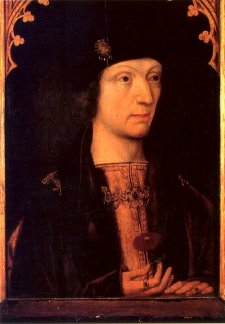 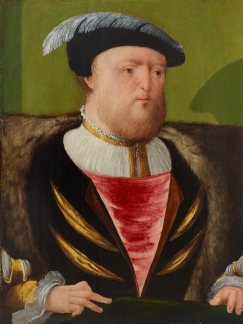