THE HORNE DANCE AT ABBOTS BROMLEY

Every September on Wakes Monday, which follows  Wakes Sunday, an unusual dance takes place in the small Staffordshire village of Abbots Bromley. A company of dancers bearing huge, ancient reindeer horns, accompanied by a Fool with a pig’s bladder, a Maid Marion who is a man in female dress, a Hobby  Horse, a Triangle Player, a Musician, and an Archer played by a young child, dance throughout the village then journey out  across the nearby reservoir to Blithfield Hall, stopping and performing  along the way.

How long this dance has taken place is unknown but it is assumed to be medieval. There was a right to hold a fair granted to the village of Abbots Bromley in 1221 and a carbon date from one set of antlers goes back to 1065–before the Norman Conquest. As the antlers are from reindeer, they (or the animals that bore them)must have been imported from Scandinavia, as reindeer are not believed to have been extant in Britain at this period. The first official mention of dancing is in 1532 when the Hobby Horse is mention (the old Hobby Horse, a bit decrepit, hangs in St Nicholas’church), and  a later account of the 1600’s describes the dance as we know it. The participants wear ‘Tudor’ style costumes today.

The last performance takes place before the Bagot family of Blithfield Hall, which is not normally open to the public. The Bagots have lived at the hall since the 14th C, although the structure is mainly Elizabeth with a 19th C  Gothic facade. The Bagot family are related to the Earls of Stafford and hence the Dukes of Buckingham; in 1195 Hervey Bagot married  Millicent, the daughter and heiress of the Earl of Stafford. 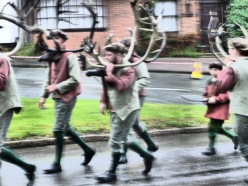 One thought on “THE HORNE DANCE AT ABBOTS BROMLEY”