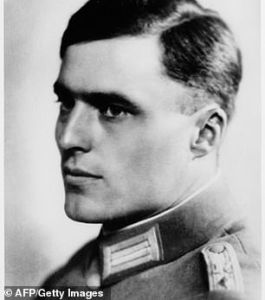 As this excellent article relates, Frederick Solms-Baruth III was among those convicted after “Operation Valkerie”, the Wagnerian name for the July 1944 plot to kill Hitler through a bomb in a suitcase. Led by Claus von Stauffenberg (left), it almost succeeded but von Stauffenberg and his co-conspirators were almost all tortured and many executed horribly as early as the following day, although that isn’t the only echo of the mediaeval era in this case.

As it happens, Solms-Baruth was not among those put to death in the months following the failure of the bomb plot as he lived to 1951. However, just days after their arrest, many of them signed legal documents conveying their property to “third parties” who were effectively Gestapo stooges. It is, of course, beyond all credibility that these documents were signed without duress. Furthermore, was it not just a modern twist on the “attainder” – used to deprive many individuals of their assets in mediaeval and early modern times, without the actual necessity of executing all of them.