Genealogy with some bite 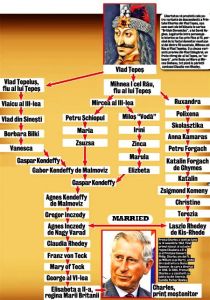 I had heard the rumour of the Queen’s descent from “Dracula” (Vlad III Tepes), through the Teck line, before and this picture from Pinterest gives an outline of quadruple descent, although the text is in Romanian and not every generation is detailed. How reliable is it?

What we know is that Vlad was born between 1428 and 1431 and died shortly before 10 January 1477, as recorded by a letter from Stephen of Moldavia. He reigned three times and fought the Ottoman Empire under Mehmet II, against whom he probably fell. The references to “Princess May of Teck” are, of course, Queen Mary who married George V, having been betrothed to his brother Albert Victor, Duke of Clarence.

Here is our version. Those connections that neither Genealogics nor Wikipedia confirm are in red. Will you say “fangs for the research”?

2 thoughts on “Genealogy with some bite”