It is fair to say that most medieval English kings had little interest in Ireland except as a source of revenue. (The same was probably true about England and Wales but it seems too cynical to say it, and at least they did live there.)

Prior to the Bruce invasion, Ireland yielded between £5000 and £20,000 a year to the Exchequer. Even the lower figure was a useful sum in medieval terms, bearing in mind that the “qualification” for an earldom at this point was about £666. So in a bad year, Ireland gave the king the equivalent of more than seven earldoms, after expenses.

By the 1350s the net revenue was down to between £1,000 and £2,000, while by the start of Richard II’s reign Ireland was running a deficit. Given the general state of the Exchequer this was a Very Bad Thing and Something Had To Be Done. (1)

Of course, simply pulling out of Ireland and making a saving was unthinkable. Instead various half-hearted measures were tried, and various people lined up to take the place in hand, ranging from Robert de Vere (created Duke of Ireland!) to Thomas, Duke of Gloucester, the King’s uncle. The matter was evidently seen as (relatively) a low priority, and in view of the state of England at this time, this is quite understandable.

Eventually, in 1394, Richard II himself, personally, set out for the Emerald Isle with a well-equipped army 7000-8000 men. By the standards of English military expeditions in Ireland it was extraordinarily successful and well-executed. Not that Richard II gets much credit for it. By January 1395 the various Irish chiefs had begun to submit to Richard and by early Spring the capitulation was complete.

Richard, writing to his Council in England, stated that rebellion arose from past failures of government and that unless mercy was shown his opponent would ally with the “wild Irish”. He therefore proposed to take them under his protection until their offences had been purged or excused. (2)

This conciliatory policy towards the Irish speaks strongly in Richard’s favour. He intended that from now on there should be “liege Irish” as well as “liege English” and he tried to settle some of the many grievances (mainly about land) between the two groups. Of course this was a major task, and probably could never have been completed to everyone’s satisfaction even if Richard had remained in Ireland for ten years. However, it was a settlement of sort.

Unfortunately Richard was forced to cut his visit short due to issues in England, leaving the young Earl of March behind as Lieutenant. March was of course also Earl of Ulster, and in that capacity had land issues of his own., particularly with the O’Neill family. By 1396 March was leading major raids into O’Neill territory, and the short period of peace was under extreme strain. By 1397 Leinster was also in a state very close to war.

In 1398, not long after extending March’s term of office, Richard II decided to replace him with the Duke of Surrey, Thomas Holland. Surrey, Richard’s nephew of the half-blood, was another young and inexperienced man, with the added disadvantage that he had no hereditary lands in Ireland at all. He required, therefore, heavy subsidy from the Exchequer. Before the change could be completed, March had been killed in the fighting, as was his son in 1425.

King Richard now decided on a second personal visit to Ireland. This was a strange decision, given that he had just annexed the lands of Bolingbroke and Mowbray, and that Bolingbroke was in France, poised to invade England. However, we have the benefit of hindsight. Richard had no reason to suspect that the French, his supposed allies, would allow any such thing – and but for a temporary shift in power at the French court, they would not have done.

Richard’s second visit to Ireland was less successful. In a parley between Thomas Despenser, Earl of Gloucester and Art Macmurrough – who styled himself King of Leinster – the latter made it clear he was unwilling to submit. Before much more could be done Richard was forced to leave Ireland to confront Bolingbroke, and Ireland was once again left more or less to its own devices.

It is remarkable that any remnant of English lordship survived Henry IV’s reign, given the state of Henry’s Exchequer and the low priority given to Ireland by a king who was fighting on several fronts, including internal battles against his opponents. But the fact is that somehow, it did. Indeed Irish-based ships co-operated with Henry in the re-conquest of Anglesey.

Henry V and Henry VI were also unable (or unwilling) to give great priority to Ireland. Ralph A. Griffiths states “The isolated administration entrenched in Dublin and its ‘pale’ was more often than not subject to the rough dictates of Anglo-Irish magnates like Desmond and Ormond, and for some time past it had been assailed by a Celtic resurgence among the native Irish themselves that was cultural and social as well as military in character.” (3)

The attitude of the Anglo-Irish peers was to remain key, because unless and until the English government was willing and able to finance significant military intervention in Ireland, their power made them the most effective players on the island. Of course, the rivalries between them meant that the Crown was often able to play one family off against another.

In 1437 the author of The Libelle of Englysche Polycye expressed concern about the state of royal government in Ireland, suggesting the country could become a base for French, Scottish and even Spanish enemies, with whom hostile elements in Ireland could form an alliance. This fear of encirclement explains much of English/British policy towards Ireland over the next several hundred years, although in the short term very little was done about it, not least because England simply did not have the resources. (Such resources as were available were being thoroughly over-stretched in France.)

By this time the Irish revenues were failing to maintain the cost of government there, and even its most senior officers struggled to obtain their salaries. In 1441 it was reported that the charges of the Justiciar of Ireland and his underlings exceeded revenue by £1,456. (4)

In December 1447, Richard, Duke of York took on the role of Lieutenant of Ireland, with a salary of 4000 marks for the first year and £2000 in each of the following years of a supposed ten year appointment. York, who was very much at odds with Suffolk and Somerset at home, was effectively ‘promoted’ to a backwater. Those responsible doubtless thought that it would keep him quiet (and busy) for a long time. He was, of course, Earl of Ulster, and therefore had very significant landed interest in the country.

Not until summer 1449 did York actually set out – from Beaumaris. Even then he did so only because the King pressed him to go. He was received ‘ with great honour, and the earls of Ireland went into his house, as did also the Irish adjacent to Meath, and gave him as many beeves for the use of his kitchen as it pleased him to demand.’ (5)

That Richard, Duke of York, was a successful Lieutenant of Ireland is in some ways surprising. He was an aristocrat to his finger tips, and not generally noted for his people skills. If he had strengths they lay in his relative honesty and relative efficiency as an administrator and soldier. York failed miserably to unite the English nobility behind him, and yet he seems to have been well-regarded in Ireland. (In contrast to John Talbot, Earl of Shrewsbury, who was positively hated in the same role.)

York quickly summoned a great council at Dublin which ensured the protection of certain hard-pressed castles and towns and also sought to address some of the more extravagant abuses of the Irish government.

His problem was that the money he had been promised largely failed to appear. He received less than half of what he should have in the first two years, and that was in tallies. After December 1449 he received nothing at all. (6)

This helps explain why York eventually threw in his hand and returned to England.

However, after the debacle at Ludford Bridge, York was sufficiently confident of his welcome to return to Ireland (with his second son, Rutland) and was able to use it as a secure base to plot the overthrow of Henry VI’s government.

York encouraged or allowed the Irish Parliament to pass legislation which left the country almost, but not quite independent, Henry VI’s sovereignty being reduced to little more than a cipher. It was even declared that the introduction of English Privy Seal Letters into Ireland was a breach of the country’s liberties. In return the Parliament voted York men and money, and rejected Henry VI’s attempts to remove York from office. The duke was not quite King of Ireland, but he was something very close. 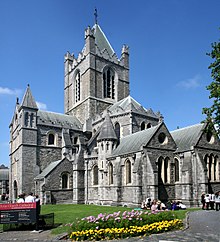 Thereafter Ireland became strongly Yorkist – even into early “Tudor” times. It may be that York’s almost accidental policy of granting autonomy was the answer to the Question. In May 1487, a young boy was crowned at Dublin’s Christ Church Cathedral (right) as “Edward VI”. He may actually have been the ill-fated Earl of Warwick by that name but is traditionally named as “Lambert Simnel”, who was taken to work in Henry VII’s kitchen after the battle of Stoke Bridge ended his insurrection the following month. In his identification of the boy (7), Ashdown-Hill uses historical, numismatic and physical evidence cogently, as ever, eliminating the other possibilities.

As a result of “Lambert”‘s coronation, Henry VII’s regime decided to control Ireland more closely. The “Statute of Drogheda” (left) (“An Act that no Parliament be holden in this Land until the Acts be certified into England”) was passed in early or mid-1494 and is described as 10 Hen.7 c4 or 10 Hen.7 c9. It is also known by the name of the newly appointed Lord Deputy at the time: Sir Edward Poynings (1459-1521) and specified that no Irish Parliament could meet until its proposed legislation had been approved by the Lord Deputy, his Privy Council, the English monarch and his Parliament. Ireland was thus legislatively subjugated and its status changed again under the “Crown in Ireland Act” in 1542, becoming a kingdom (“An Act that the King of England, his Heirs and Successors, be Kings of Ireland”) under the same monarch as England, in place of a lordship. Curiously, this was in the same year that Wales was subsumed by the Kingdom of England (Laws in Wales Acts). As the sands of the “Tudor” era ran out, the Earl of Essex was sent to suppress another Ulster rebellion but ignored his orders and returned home to aim for the crown. James VI/I’s subsequent plantations filled the power vacuum left by the O’Neills.

Consequently, the “English Civil War” is also known as the “War of the Three Kingdoms”, each of which had a different religious settlement as Charles I’s reign began. Similarly, legend has it that George I expressed to plant St. James’ Park with turnips and asked an aide the price: “Only three crowns, Sire”. Poynings’ Law is still in force in Northern Ireland, whilst it was fully repealed in the Republic as late as 2007.