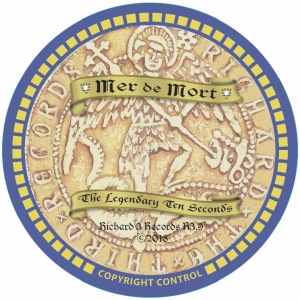 Anything new from the Legendary Ten Seconds is always to be greeted with delight, and this new album does not disappoint. It tells the story of the House of Mortimer from its beginnings in France, to its ultimate destiny on the throne of England, through its descendants of the House of York, Edward IV and Richard III.

The narratives are read by actor John Challis, who played Boycie in Only Fools and Horses and who now lives at Wigmore Abbey. (Lucky man!)

Mortimer Overture. Impressive opening, with an almost marching rhythm – it’s possible to imagine one of the Mortimer earls riding past at the head of his dazzling retinue, and then disappearing along the road. I liked this very much. One of my favourite tracks.

Mortimer Castle. I liked the harmonies on this track. The background is perfect in the chorus, and I particularly liked the echo effect.

The Marcher Lords. And a powerful, influential and often tetchy lot they were too! A wise king handled them with caution! This is a strong song, and one can picture the generations of Mortimers standing firm.

When Christ and his Saints Slept. This one is about the period known as the Anarchy, which ended when Henry II ascended the throne. Once again, I particularly liked the background, which adds so much.

De Montfort. Tells a bloody story of the battle that ended with the death of Simon de Montfort. As a reminder of how brutal those days could often be, Roger Mortimer sent his wife de Montfort’s head as a trophy! Some good sounds in this one, making me think of heads being lopped!

The Round Table 1279. A song about an “Arthurian” tournament, creating a dazzling scene of knights in armour, fine horses, and beautiful women.

Two Thousand Marks. About the Roger Mortimer, and his dealings with Piers Gaveston, the influential favourite of King Edward II. This Roger eventually deposed the king and became the lover of Queen Isabella. We all know the outcome, and this song bowls along as it relates events.

The Privy Seal and the Royal Shield. Another song about Roger, and Mortimer participation at Bannockburn. I liked this one a lot. A great join-in chorus.

The King of Folly. Opens with a trumpet and set firmly in the year 1329 and great celebratory events at Wigmore Castle. A very enjoyable tune and rhythm.

The Tragedy of Roger Mortimer and the Mystery of Edward II. A haunting guitar solo opening for this song about Edward II’s fate at Berkeley Castle. Did he really die there? A quaint atmosphere pervades this song, which seeks the truth about Edward’s demise. . .and relates how his great foe, Roger Mortimer, eventually paid the price for his overreaching ambition. Maybe Edward lived on in obscurity.

Leintwardine. How Edward III, the man who ordered Roger Mortimer’s execution, went to Leintwardine to lay an offering of golden cloth at the feet of a statue of the Virgin Mary. I liked this one. It’s quietly understated, and a little eerie. Perhaps because a Mortimer Earl never did wear the crown, although it is from one of their daughters that the House of York descended.

Mer de Mort. A song that gives a voice to Edmund Mortimer, 5th Earl of March. This is a delightful song, and one of my favourites on the album.

Mer de Mort, Part II. Once again Edmund expresses his feelings, and laments that his elder brother has no grave. This song echoes the first Mer de Mort, but is different. Very sad.

Henry VI. A song about the last Lancastrian king, who was to lose his throne to the Yorkist Edward IV, a descendant of the Mortimers. I like the rhythm of this song, which moves along pleasingly. It actually took a fair time to get rid of Henry VI! He was an incompetent king, but he went in the end, thank heaven. A good track.

Sunnes of York. Another easy treat, relating the tale of the how the House of Mortimer became the House of York. And tells of the final generation of Yorkist brothers, Edward IV, George of Clarence and Richard III. The House of York did not only claim the throne through the name of York, but, importantly, through the Mortimers, who descended from a more senior branch of the royal family. Familiar LTS territory. This song bowls along.

The Chapel of Sir John. A brisk rhythm for a rather spooky song, about what is seen in the windows, floor and screen of the medieval chapel of Sir John Evans in St  Matthew’s Church, Coldridge in Devon. The words recreate the atmosphere, and so does the music. An excellent conclusion.

This album marks a great advance in the LTS repertoire. A richer, fuller sound that sets it apart. Very much to my liking, and I hope, to yours.

View all of legendaryten's posts.